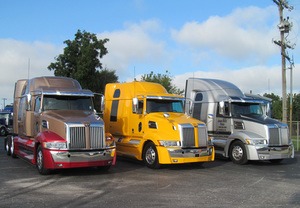 I started with a new company about a month ago. I could list the reasons but im going tp just simplify it and say i am not comfortable with this job and the kind of stress it puts on me. I have an offer for anither job but the orientation starts next week. If i send a message over qualcomm and tell them not to diapatch me next week because im bringing the truck in this weekend, can they hit me with a quit under dispatch on my DAC report?

I'd highly recommend you give proper notice to your current employer and tell the new company why you have to wait a few weeks to start. They'll understand and appreciate your honesty and professionalism.

That said.. why so distressed about a new job? Maybe someone here can offer advice?

This new job is flatbed heavy haul. Pullins steel coils. I knew, and was prepared for the increased amount of physocal work so that isnt the problem. The problems i have are odd. I will use today as an example,

I started at 7 am and made a delivery with no issue. The trailer i have isnt a normal flatbed, its a coil wagon as they dont have any heavy haul flatbeds available right now, and my dispatcher tried to send me (for the fourth time) to a place that will not load it. I informed her of this and she got me a new load. The new load would have put me 1,000 lbs overweight so i told her and she got me a third load that i could carry. I was picking up in indiana and need to print a permit for the overweight load, she couldnt get me the permit for whatever reason and eventually emailed it to me and my phone wont print on the trucks printer. I decide to go ahead and pick the load up and hope the permit being on my phone will be acceptable. I get to the shipper and find out the appointment to get loaded was for 16:00 not 17:00 as my qualcomm stated (my fault for not checking if the load info was for est or cst i suppose) i call about that and get the man thats on call after 5pm. I accepted part of the responsibility for being late but mentioned that it might be good to let new drivers (ie, me) know things like that.

Things like this happen several times a week and it wouldnt be a problem but when i call about these issues they get ****ed off. They dont say anything out kf the way, i just hear it in their voices, but it makes me very uncomfortable and nervous about calling when i have issues. (Sounds *****y, but ive not had this problem at my previous two jobs) They have driver facing cameras and i was told before i showed up for orientation that they didnt. Half the time my dispatcher doesnt know what im going to get loaded with (number of coils, weight, etc). I would like to give a proper notice but im not sure how much longer i can deal with this.

The primary person a driver communicates with at his/her company. A dispatcher can play many roles, depending on the company's structure. Dispatchers may assign freight, file requests for home time, relay messages between the driver and management, inform customer service of any delays, change appointment times, and report information to the load planners.
Tim F.'s Comment

Johnny Boy ,,.are you a job jumper? You say you started this job a month ago and then you say you didn’t have this problem at your 2 other jobs. Assuming, of course, that you started driving when you joined this forum that would put you at 3 jobs in a year and a half. You’ll never reach top tier driver with any company if you continue to bail when things are not going good. I would suggest you stick it out there and give them a chance to work out any kinks.

I wouldn’t want a lot of jobs in a short period on my resume...it doesn’t look good. Two weeks is the appropriate timeframe as far as notice. Good luck

The first two jobs are kind of one job. I worked for covenant then moved to a company they own called star. I did start driving when i joined this forum though, and jumping jobs is a concern of mine. The problem is you never really know what a job is like unless you work it and the was thjngs are going here so far are pretty rough. I probably should give them some more time "to work the kinks out." It just seems like this is how things work in this company and its wearing me down with stress