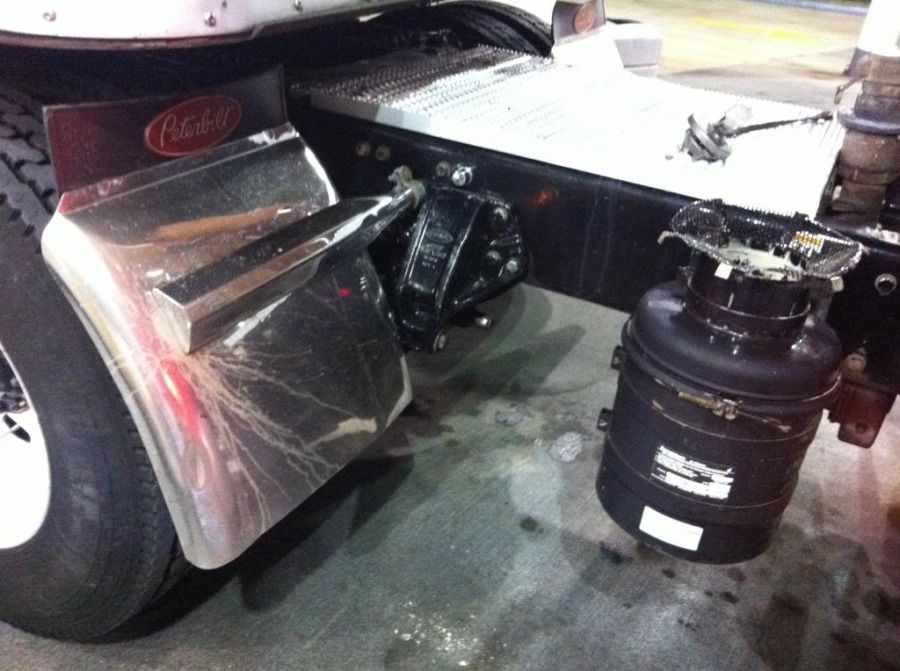 What is the round object on the right side of the frame??

I may sound pretty silly...but I'll hazard a guess...... On the new trucks, part of the emissions system periodically burns the particulates in the exhaust system. In order to do that, they added a "fuel" to make it burn in excess of 800 degrees. I do believe that this is the canister that you pour the "hot fuel" in... So now ya'll can guess better than I did....come on...don't be shy...

Now just for the record.....TSB looked at it, and he thinks its an exterior oil filter....

Something new to remember to check on the pre trip! LOL

Do not see the second picture, so will not hazard a guess as to what you are asking about.

As for the first picture, looks like possibly a propane bottle to me because I do not see any air/fuel lines coming to or from it.

How about propane tank for the turkey fryer?

How about the alcohol tank for the brake lines?

The air brake system has alcohol injection to keep them from freezing up in the winter.

With the open top and a simple screen stuck in the opening I would suggest its apart of an older system that no longer works and it just was not removed from the truck. The opening at the top with the screen in it looks like it was hooked up to something at on time. Honestly this must be an older truck as I have not seen anything like this on the new trucks. Now it could very well be apart of a hydraulic system which no longer works but in any case the large hole in the stop would stop it from building any pressure up.

@Starcar No this would not be the part of the emissions system periodically burns the particulates in the exhaust system. While they can be mounted in the position its simply not be enough as the DPF filters are at least 2 foot long and this container has no hook ups for fuel or exhaust.

@Ken M The absolutely worse thing that a person can do to a braking system is to inject any liquids into the air brake system including but not limited to alcohol. As alcohol dries the water out of the system it would also dry out the air lines and cause them to crack causing a dry rot from the inside out.

Thanks for all the ideas, guys.. I still have no idea what it is, but I appreciate all the guesses..as far the second picture, I tried posting it from my PB account but for some reason it won't accept the link as it's copied and didn't show up..if(when) I get it sorted I will try again. Guyjax, I appreciate what you said about the alcohol issue and drying out the air lines..my uncle, who is a retired truck driver, told me the same thing, though...what DO you use to keep your air lines from freezing??