Well My Day Is Off To A Rough Start 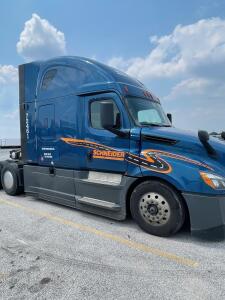 I was given a backhaul from Niagara Water my first week solo on Walmart Dedicated. The place was tight, especially with snow piled up. Niagara loads trucks with a robot. The robot carries two pallets of water at a time. You must be with 1.5" of exact center and perfectly flush with the dock or the robots won't load. Took me 20 minutes to get in there straight enough, with the help of the yard driver. A couple drivers came up to me later and said I did well for the first time. A Marten driver was pi**ed at me, even though I offered to go around the yard and try again to let him through.

I hadn't used my thick skin much since leaving the military, but I've had to put it on quite a few times since driving with a CDL.

If you got it in without hitting anything you did a good job. Don’t worry about being banned. There’s a million or more other places to deliver.

Advice For New Truck Drivers Backing Challenges Tips For Backing
Click on any of the buttons above to view topics with that tag, or you can view a list of all forum tags here.