My wife is 100% behind me as we have all researched the lifestyle... She knows that the sacrifices to get the experience will be worth it... We have a strong Christian community here which can help.

Those are the magic words that tell me you will be successful. Always glad to meet a brother in the Lord. He will see you AND you family through . . .

Just checked into the hotel. Tomorrow is my first day at C1 in Fort Wayne. My roommate isn't so bad. The hotel room is clean.

I've passed all written portions of the test! The CDL program from this website were extremely beneficial. Don't relay on powerpoint presentations to pass. 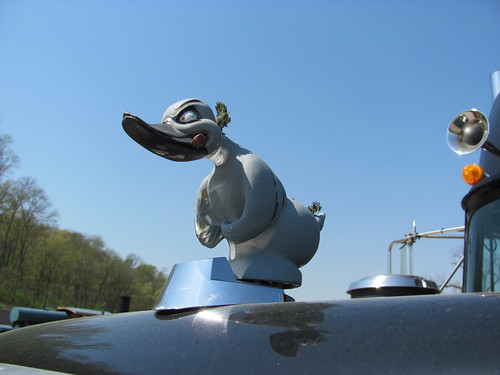 I've passed all written portions of the test! The CDL program from this website were extremely beneficial. Don't relay on powerpoint presentations to pass.

Congrats! I really think the High Road program here is a huge help for anyone seeking their permit. And I'm almost stunned at the apps to help you learn your pre-trip inspections. Keep on rolling safely!

Well, I hate to say but I didn't get my CDL this time... It has been a logistical nightmare. I didn't get the pretrip down pat so they said no practice driving or anything until it is passed. It changed what was supposed to be just a 3 week course to possibly a 5 week course or longer. I couldn't afford another 2,3, or 4 weeks without some kind of pay. Also, they stated with the all the backlog of 3,4, and 5 week students that it might "be awhile before you can test." Any hoo, I did awesome on my first drive on the city streets. I double clutched so admirably that the instructor kept making me pull to the side of the road to "start from scratch as you seem to have done this before." However, I got VERY little backing practice about 5 minutes total its been about 3 weeks. We had 18 students to a truck. There were days before I even got into the truck. The director of the school got on the platform a few times the past two weeks to state we are sorry for the lack of graduating CDL students as we have lost 4 range instructors and 2 more are on vacation. Also, our range instructor was reprimanded verbally in front of students several times for just yelling instructions and not allowing students to think for themselves on how to back up. He was also a ****** bag for telling students to put a maxi pad between their ******s and blowing cigarette smoke into the cabs. On more than one occasion I have seen several grown men come out of those trucks with their nerves shaking. Anyway, I believe I came to the C1 School in Ft Wayne at a bad time as they were short staffed and had way too many students here. If I had a couple thousand with me other than a couple hundred I probably would of been more successful at this school especially since I was near broke when coming. I think someone should be more financially prepared before making the move, as well. My landlord who owns a trucking company stated he will help me out further. If anyone is thinking about going to C1 especially Fort Wayne through Driver Solutions I would be very careful if you are low on funds because it won't be a 3 week course but possibly more than a month before you get out!

Just want to mention that we always, ALWAYS, recommend that people save up a minimum of $1000 beyond the price of the schooling cause you WILL need it.

Back to being serious. Dude, what a disappointment. I'm so sorry. Sounds like you gave it your all. Maybe Brett or any of you experienced guys have some suggestions out there?

Don't give up. There's got to be a way for you to get to the finish line.

Man, that's a bummer to get that far along in the process and then have to drop out and (possibly?) start over.

What are you going to do now? The fact that you stayed as long as you did means you must have to pay them back at least some of the tuition I would think.

Did they say you could return at a future date and try again?