Yeah the West is awesome. You can drive for hours without seeing a building. Drive I40 across New Mexico and you would swear that John Wayne would come riding out of one of those washes any time.

I have not taken the time or forgot to get a photo of the last 2 days. Yesterday I pulled my longest load to date to a staging area just outside Yellowstone National Park. Yep, I get to go in there again only this time I have a 98 foot bridge beam. I am pulling it on a steerable dolly and this makes me around 135 feet total length. Got a little exciting yesterday when I got off the interstate in Belgrade, MT and the dolly would not turn back straight no matter what I did. Had to block traffic for a little bit. Trouble was the pony motor died as I was making the corner. Got everything into my lane but the dang thing would not turn the axles straight again. I am fiddling with the remote all the while the idiot pilot did not tell me the motor was not running. Only blocked traffic for about 5 minutes. I will get photos tomorrow of this beam. Funny thing is that all the other drivers were in a hurry to get loaded and the shipper loaded them in reverse order so I get to be the first one unloaded.

Today I took a hook and drop (in that order) of 2 concrete box culverts of around 25k each in a borrowed truck. My truck is still under the beam. Just took it to the construction zone and dropped the trailer.

As promised, here are the photos. Each beam is 98 feet long and weighs in at 96k pounds. We took these in through West Yellowstone this morning. We even had to turn these beasts around and then back into the crane.

Here is a photo of four of the five trucks that were ahead of me. I had the last beam to be placed. 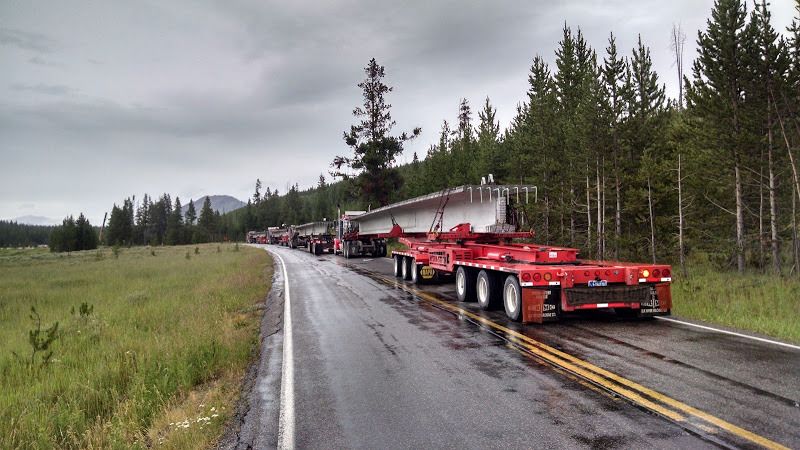 And here is the beam that I hauled... 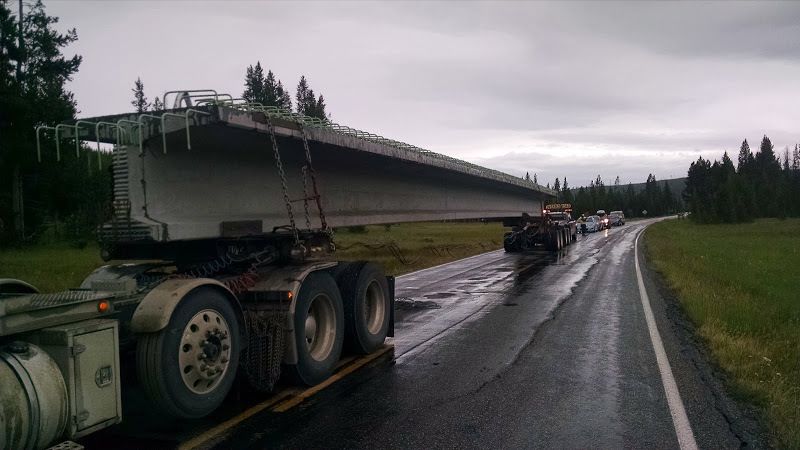 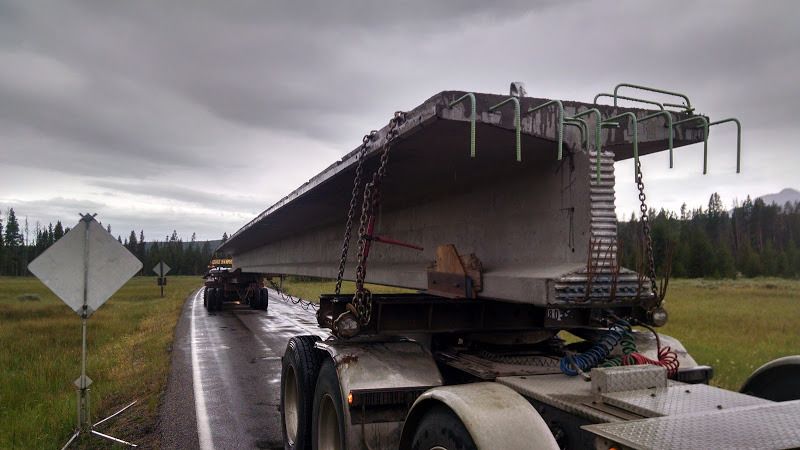 Picked up these 4 trailer chassis in Chesapeake VA (near Norfolk) yesterday and delivered them in Forest View IL (near Chicago) today. Just 6,800 lbs each. First time I hauled anything like this. The first 3 pics are during loading, the last 2 are at delivery after removing the 11 straps I used (2 over the front tires, 2 over the rear tires, 1 over each of the inside tires, 2 belly straps and 3 more over the top . Not taking any chances lol! 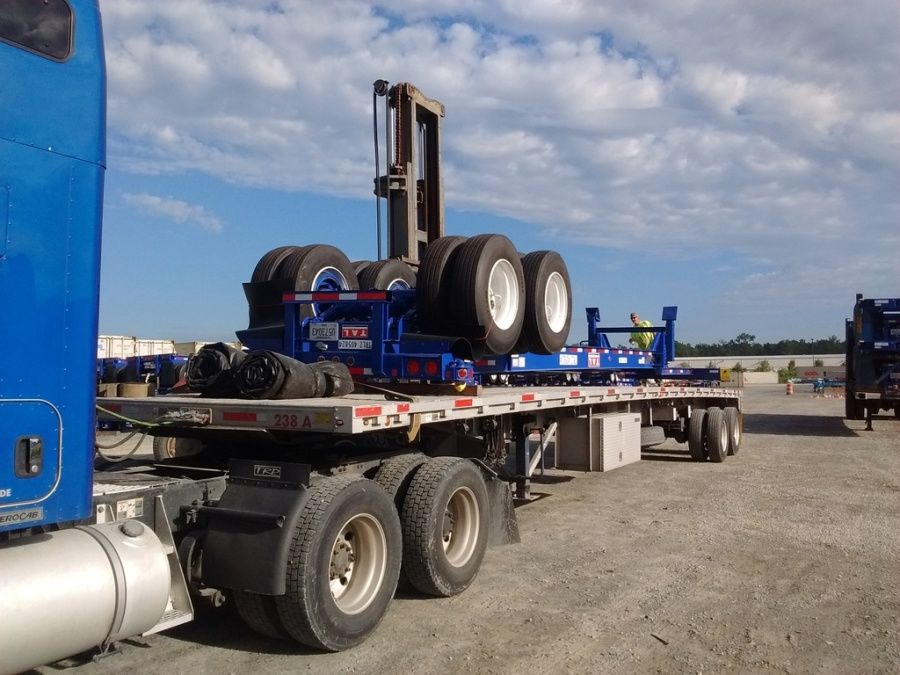 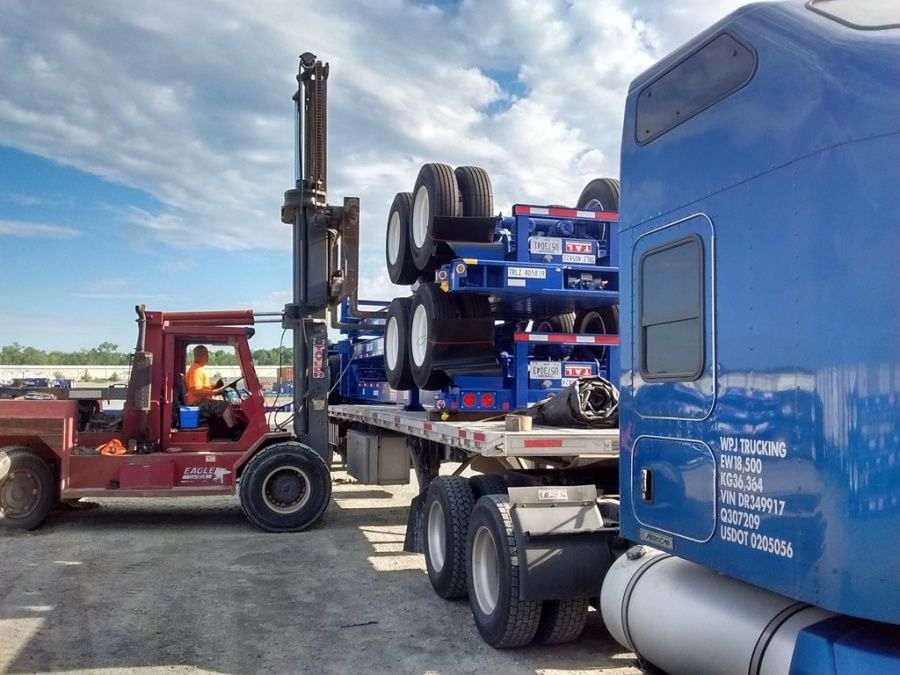 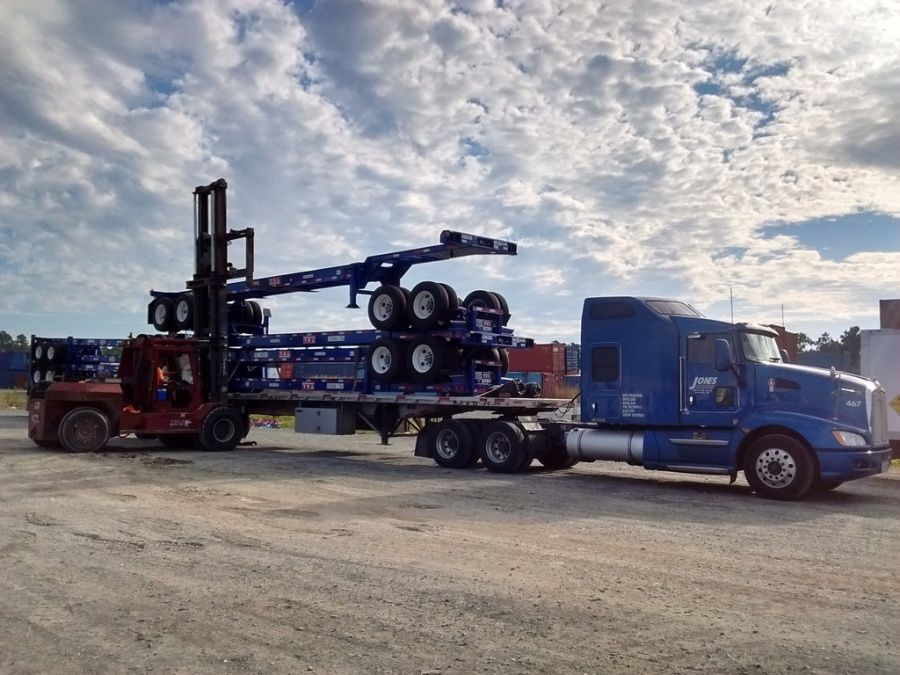 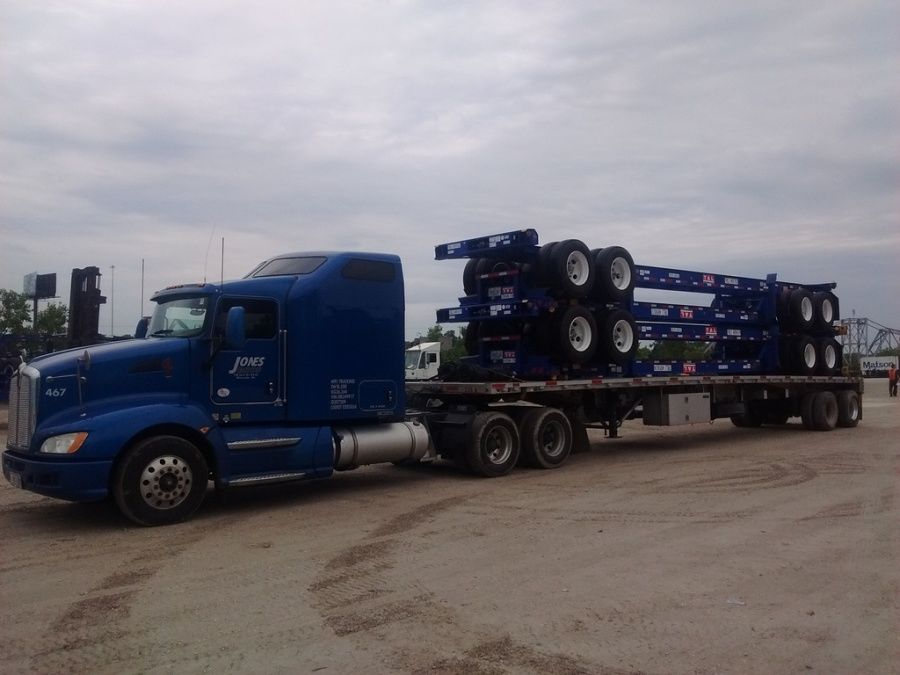 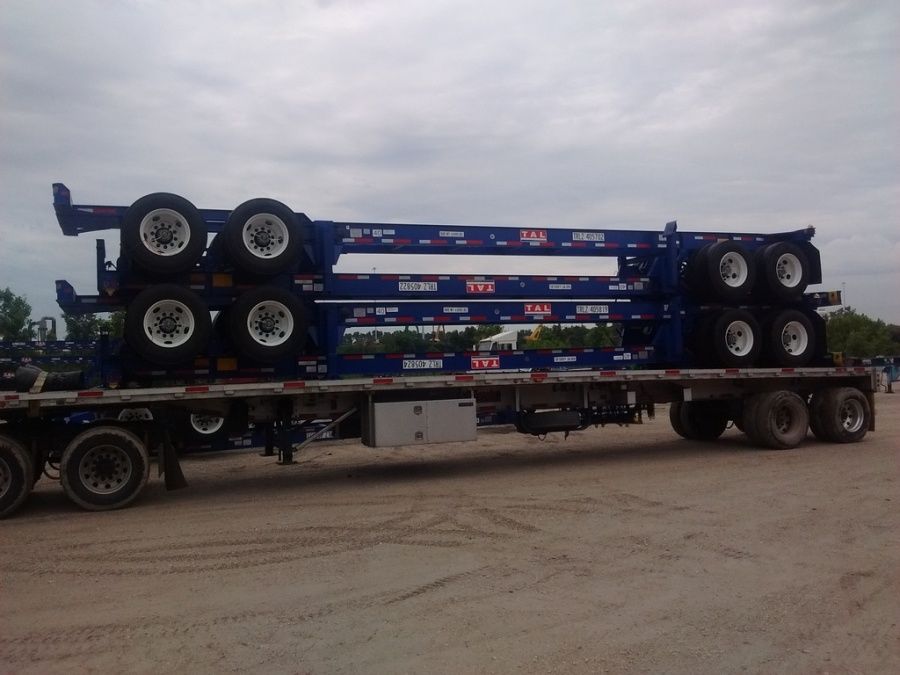 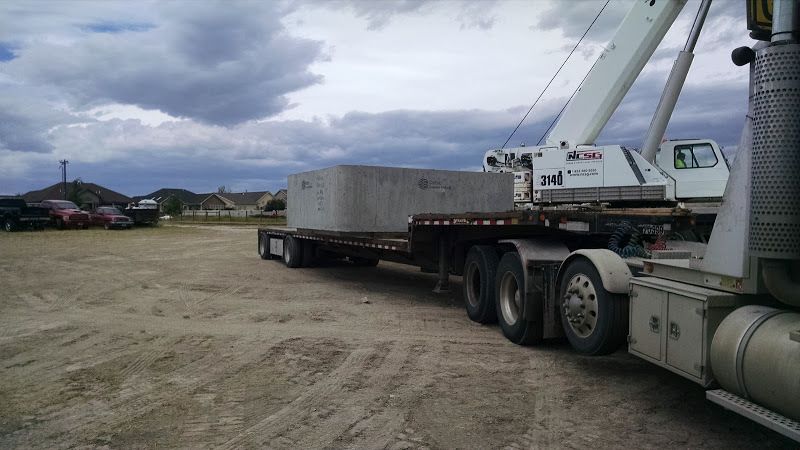 And then I went back for more for tomorrow... 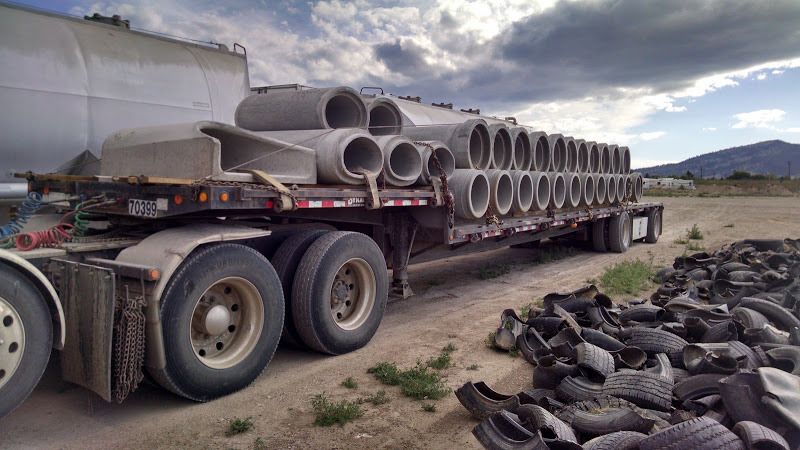 Picked up the front 2 near Chicago, the third one near Omaha, then delivering the rear 2 near Tacoma and the front 1 in Everett. Stopped for the night now in Rapid City, and my route brings me by my house Monday morning! :) 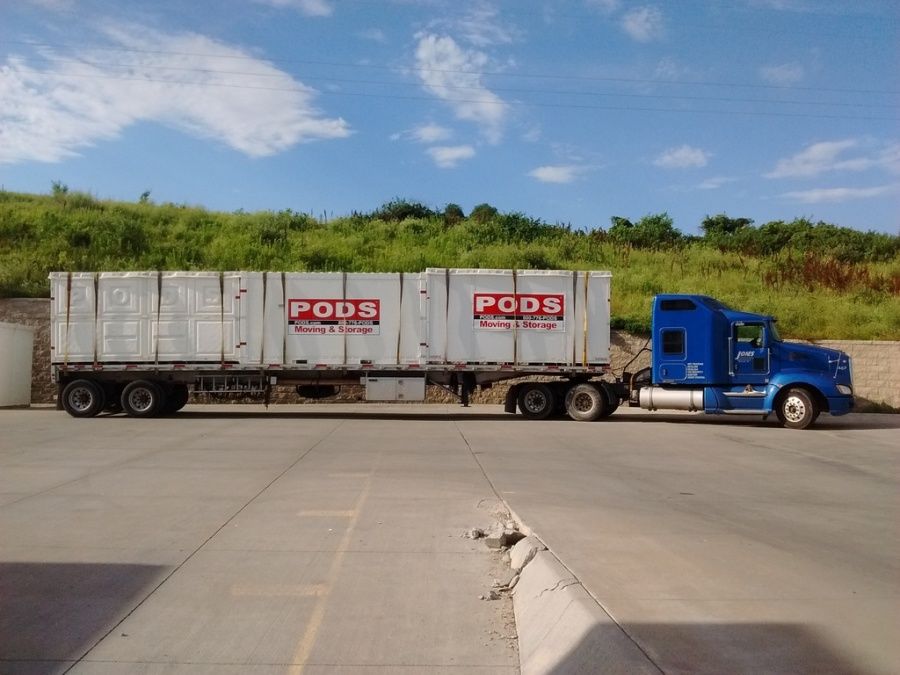 As a day driver for a construction supply company, it is not uncommon for me to have to load, and sometimes unload, 2 to 4 loads in a day. We rarely tarp anything, but we throw a lot of straps. The other thing we are called on to do is back into some interesting situations. These photos are from a school I had to deliver to in Wisconsin on Monday. I walked over to the site, saw the crane next to the building, and saw what I surmised was the only way it could have gotten there - between two pine trees and a fire hydrant. I ask the crane operator if that's where I have to back in, and he says, "That's where I just came in." Uh, yeah, but your driving a roofing crane. Meanwhile I have lifts stacked two-high of 4'x4' ISO, tapered fiber board stacked two-high, and rolls of rubber on the back end. I took out a few branches, and had someone spot me on the fire hydrant, but no damage to the truck, which is what I was more worried about.

As a day driver for a construction supply company...

Sorry, still getting the hang of posting photos. 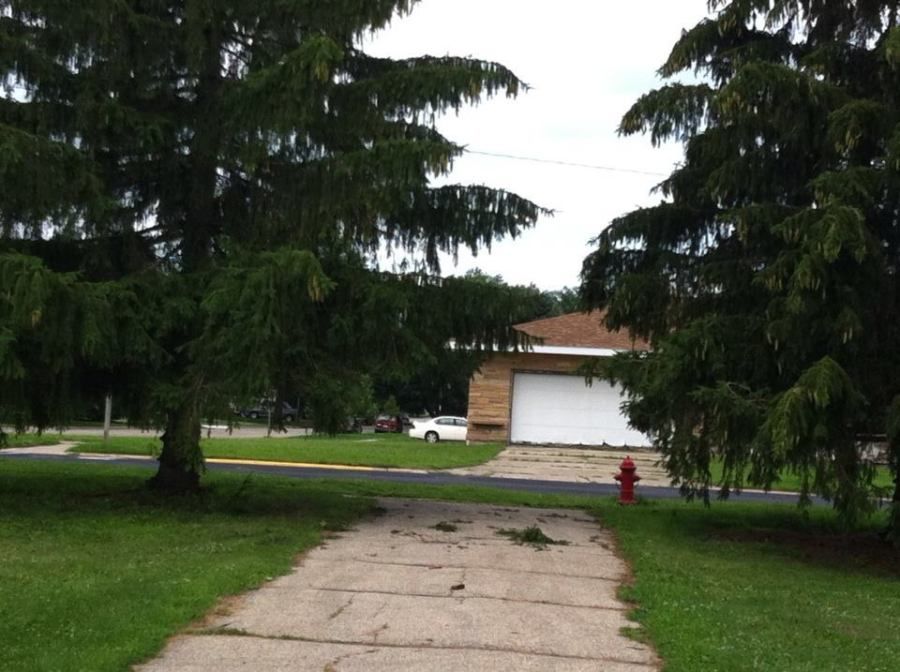 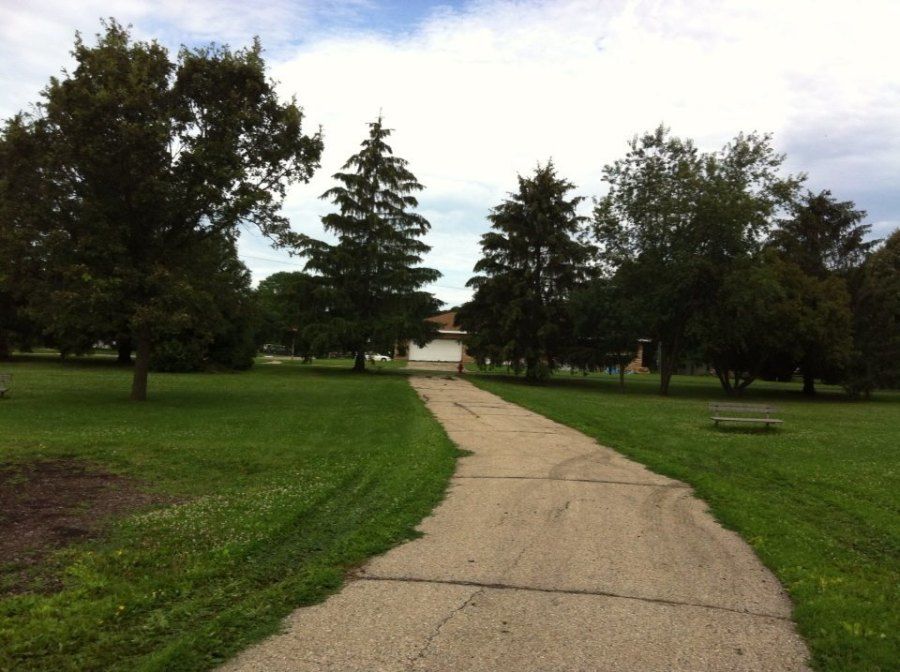 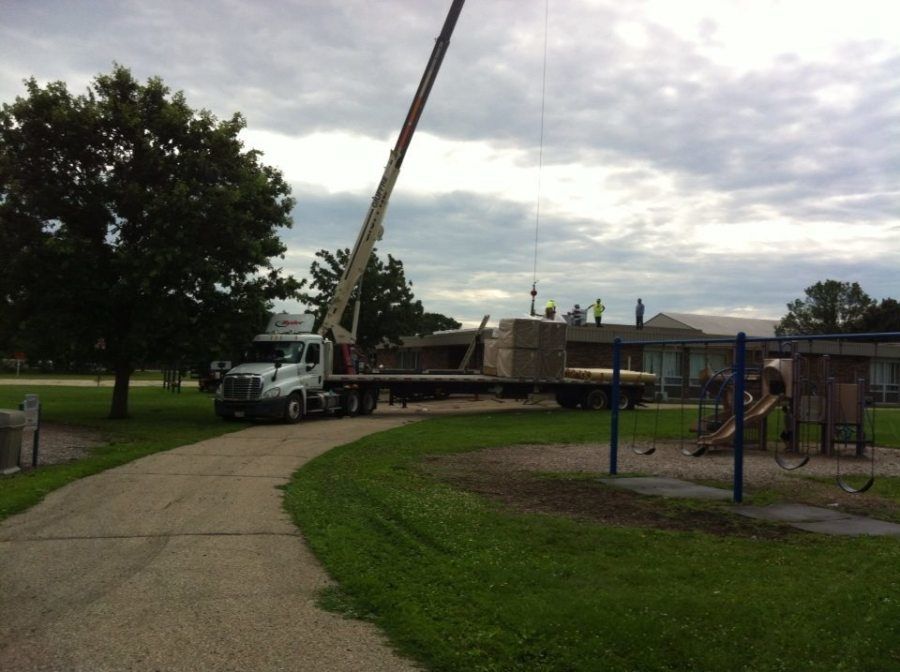 My tiniest load yet. Look at that little guy! He looks so lonely up there! 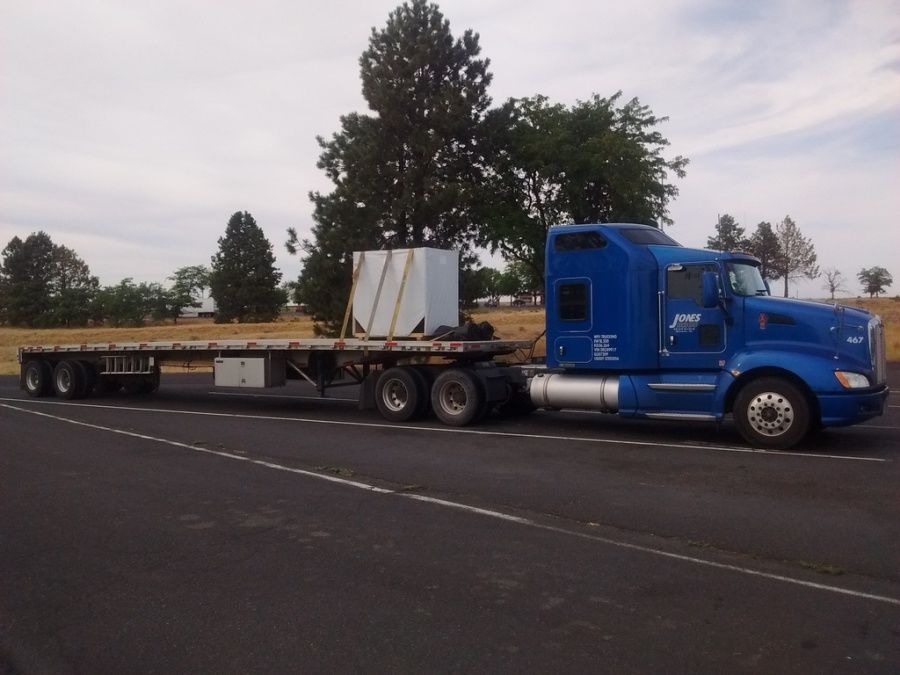 Just a 4,000 lb CAT engine, on the overnight express from Tukwila WA to Hayden ID.

Ran into one of your drivers Monday at Pyramid Mountain Lumber at Seeley Lake. He was picking up a preloaded trailer that one of your other drivers had dropped. Well when I saw him he was removing the tarps because he did not have enough on there. There was still some weight room so they wanted to put 2 more bunks of lumber on there... Another reason not to tarp.... LOL Heck they had to take one off me because they had me at 108k and I had to get it below 105,500.

Ran into one of your drivers Monday at Pyramid Mountain Lumber at Seeley Lake. He was picking up a preloaded trailer that one of your other drivers had dropped. Well when I saw him he was removing the tarps because he did not have enough on there. There was still some weight room so they wanted to put 2 more bunks of lumber on there... Another reason not to tarp.... LOL Heck they had to take one off me because they had me at 108k and I had to get it below 105,500.

Lol those lumber yards are always trying to get the most bang for their buck. Every time I've loaded lumber so far I've always been overweight the first time. I'm surprised they didn't say anything before the first guy tarped the load! That sucks for the other guy, but at least he'll get paid for an untarp, re-tarp and untarp again at delivery.