Well Pat, at least they had their hands in their own pockets that day!

Just because i know it will make Bud break out in hives and a cold sweat I thought I would show this photo of my truck backed up into the tarping station at the SAPA plant in Cressona, Pennsylvania. Those people who say flat-bedders don't ever get into very many tough backing situations have probably never driven a flat-bed truck. We get our share of the fun stuff, believe me! I don't know if you can tell or not, but there is literally about two inches of clearance on either side of the trailer from the safety platforms. This is designed to keep you from falling off your trailer, but what it usually accomplishes is adding about an extra hour to the time it takes you to tarp your load. They make us put down a layer of poly plastic sheeting first on these loads, which then just makes it dangerously slippery to walk around on top of the load when trying to spread your tarps out. Some of this safety stuff is like a catch 22 - I'm less likely to fall off the trailer this way, but I'm way more likely to slip and fall because the poly makes it so precarious up there. What are you gonna do?

When we back into this spot, one side of those safety platforms can be rolled out a little, but it doesn't really create any extra clearance for you because their is some vertical steel plates down at the bottom that your tires must be inside of as you are backing into this spot. I witnessed one guy one night in here tear up two tires and one wheel just trying to get it done.

I took the photo standing up on the safety platform at the rear of the trailer looking forward - you can see the back of my grey tractor up at the other end. 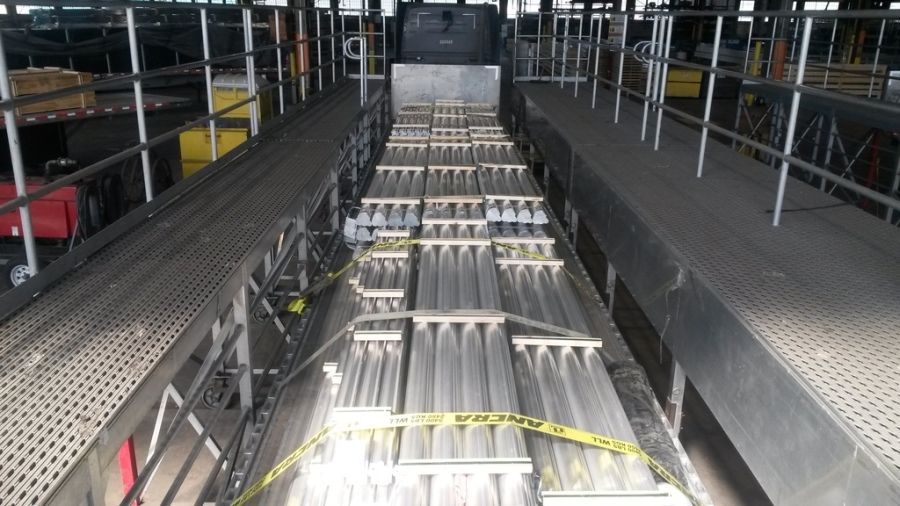 Hey "Little Syster" you and I just might run into each other at this plant some day. The last three times I was there I saw a "Systems" truck there picking up a load.

Thanks Old School, now I have to stop for calamine lotion! Does anyone know of a truck stop that has bathtubs instead of showers so I can soak for awhile?

Lol yeah a bright shiny vest screams either "new driver" or "management" of some sort. And why does it take three of them? Wouldn't one be enough?

I haven't had time to post much the last week since we've been running team. My sleep schedule has been erratic since I have to get up every time we load or unload. All in all it's been a good week though.

Here's the lightest load I've ever had, less than 2100 pounds. This went from Reno to Clatskanie, OR, for some electrical work at a big lumber mill up there. 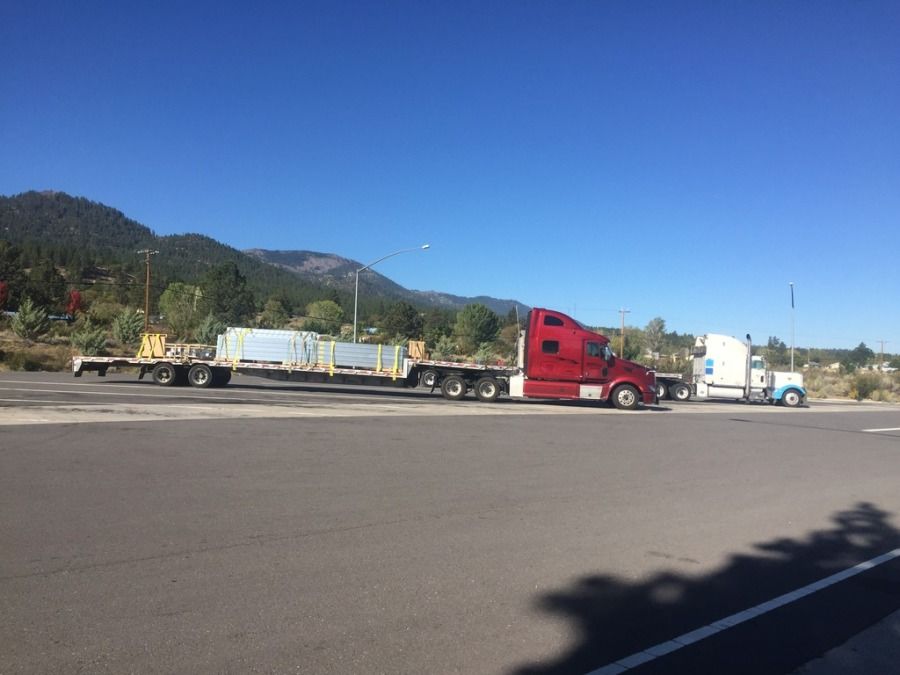 Our next load was hardwood out of Chehalis, WA. I didn't get a picture of it, but it was notable for another reason. The QC message warned to fuel up before loading there, since they load to the max. They even have a sign at the entrance that says they will load to the max regardless of your fuel situation. So we filled up two miles away. We weighed 80,040 pounds when we scaled. They forklift driver was really happy when I told him we'd run with it. None of the axles were over (well, technically our steers were over, but I figure if I get a ticket for that, I'll just pay it). There's a weigh station 40 miles from there. I figured we'd burn off the extra weight by then. And we did! We crossed the scales and got the green light. 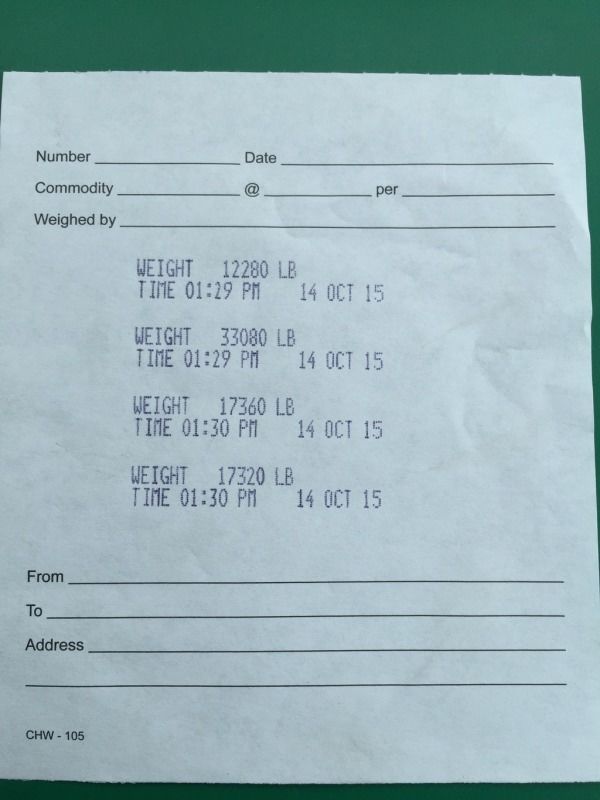 The lumber went to Salt Lake City. We were dispatched on a repower from the terminal to Washington. We had everything strapped down when I got a return call from the receiver that they don't do receiving on Friday. Crap! Here's the load that wasn't. 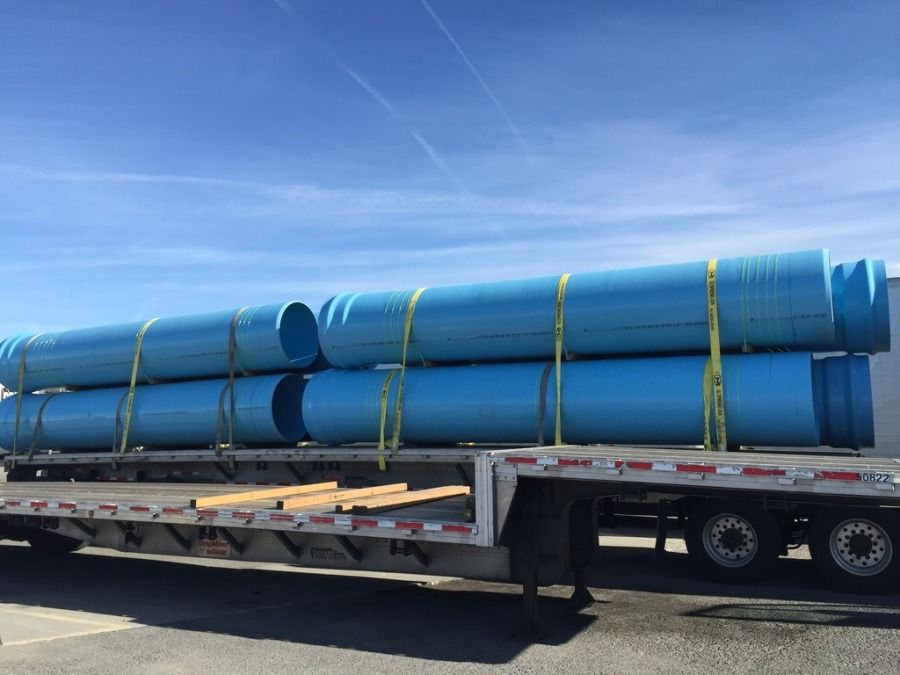 After some discussion with dispatch, we were taken off that load and given some pipe to run from Cedar City to Sacramento. Didn't get a picture of that one. It was a two stopper, barely made it in time to the last stop to get empty.

This morning we picked up a steel building going from Visalia to Idaho. I'll post up a picture of that when we stop in a few hours to switch drivers.

Well I'm not pulling flatbed at the moment but it's one of the things I'll be doing with my new employer. The van I'm pulling has a bridge rail crane built it for specialized job site and private delivery. Right now, I have a load of auto lifts (2 post and 4 post style )on board headed for the east coast. I'll post some pics as I put them together. 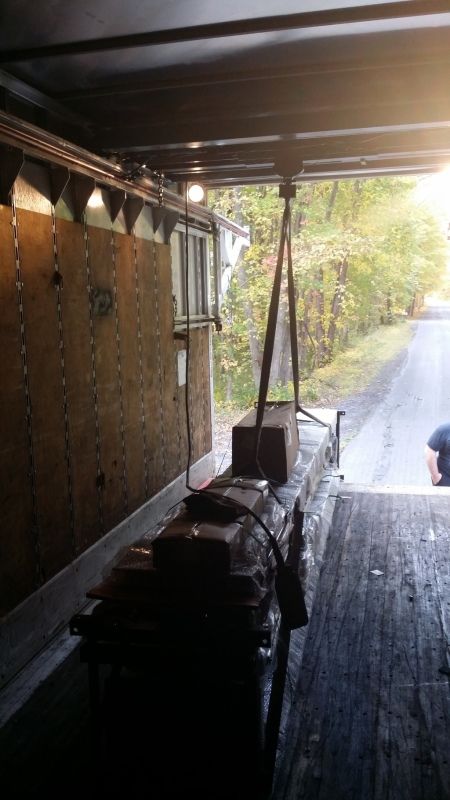 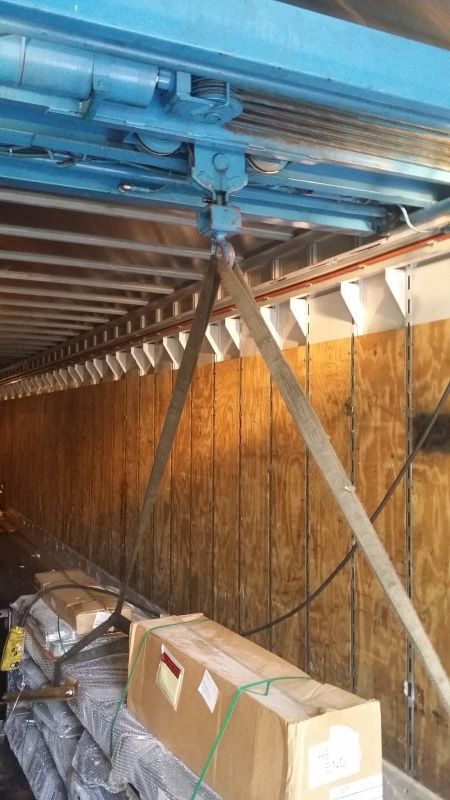 Robert, that is a really cool set up. I've never seen one like it before - they may be more common than I realize, but I have never seen one. Does it run off of the tractor's batteries? It appears to be hydraulic, and I assume there is an electric pump for it. Could you elaborate on how it works please? Also, what is the company, and is this a local type job where you are sleeping in your own bed at night?