That's a classic motor home. I'd call it the "Piggyback-a-bego."

Here is one for those that are thinking that they might want to get into oversized hauling. I know I have posted photos of these before but I thought I would go into a little more detail.

Is it difficult when cornering? It can be dicey at times. Driving down the road with curves is no problem for the most part. It's when you get to a 90° turn that you have to steer the truck and the trailer both. If you look under the bunk that the beam is sitting on you can see a hydraulic cylinder and lines. There is an identical one on the other side. These turn the wheels as one unit under the bunk so as you are turning right or left you can keep the dolly going straight until it clears the turn and then you turn it back. There is a little motor in the trailer that powers the hydraulics. That grey box on the back corner is the receiver for the wireless controls that you use to steer the dolly.

What company do you work for Pat? Also can you post a picture of your rig?

What company do you work for Pat? Also can you post a picture of your rig?

Just a small 10 truck company. Here is a photo with the 3 axle RGN and a grader that I picked up in Cortez CO for a customer of ours up here. Deadheaded all the way down. 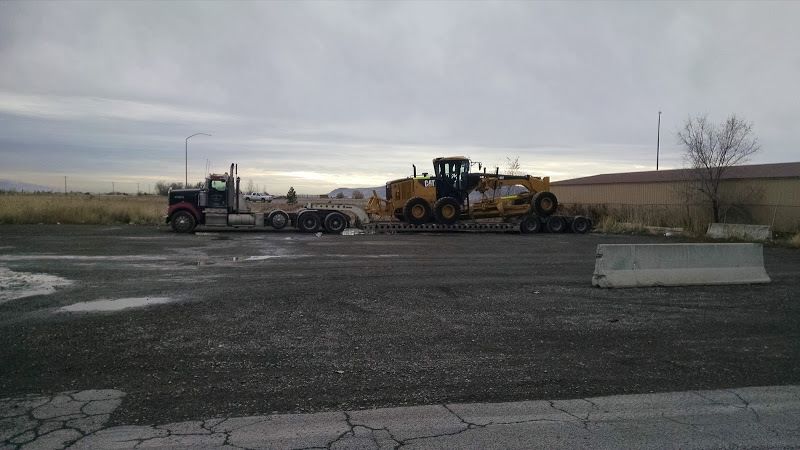 I took a load to Tempe. AZ this week. It seems they are remodeling the Arizona State University football stadium there. SAPA extrusions are used in a lot of stadium seating all over the country. I delivered this load of material in on Thursday afternoon. It was scheduled for Friday night at 2200, because that was when they could coordinate a crane to unload it. Now any decent truck driver worth his salt does not want to MT out his load on Friday night at ten p.m. - that leaves him waiting for someone to find him a load on Saturday. I made a call to the job superintendent and told him I could be there Thursday at three p.m. He said, "No dice, the crane wont't even be here until Friday night." When I told him, "There's no reason for a crane, in fact a JLG lift with forks will do the job a lot faster," he said, "Well, we've got plenty of those machines sitting around here. Come on, and we will get you unloaded." That's how you do this stuff - First thing Friday morning they found me a lumber load for my back haul and I'm on my way back east again. I only ran two loads this week, but one was 1800 miles, and the other was 1500. Had I waited around and went with that ten p.m. Friday delivery I would not be turning in 3,300 miles this week.

Here's some shots of this load: 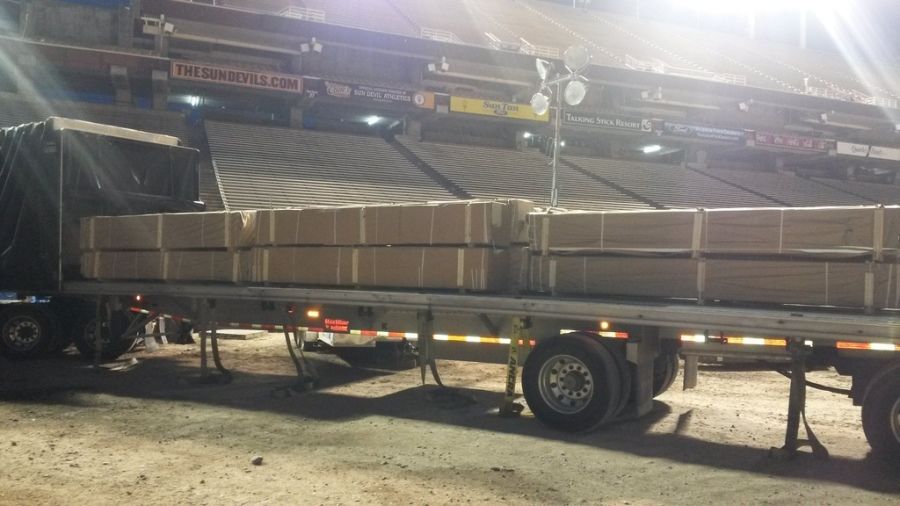 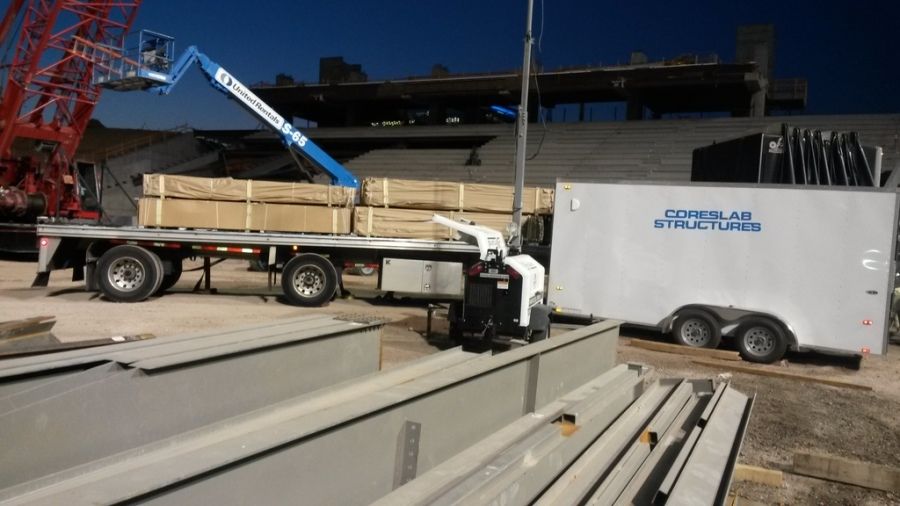 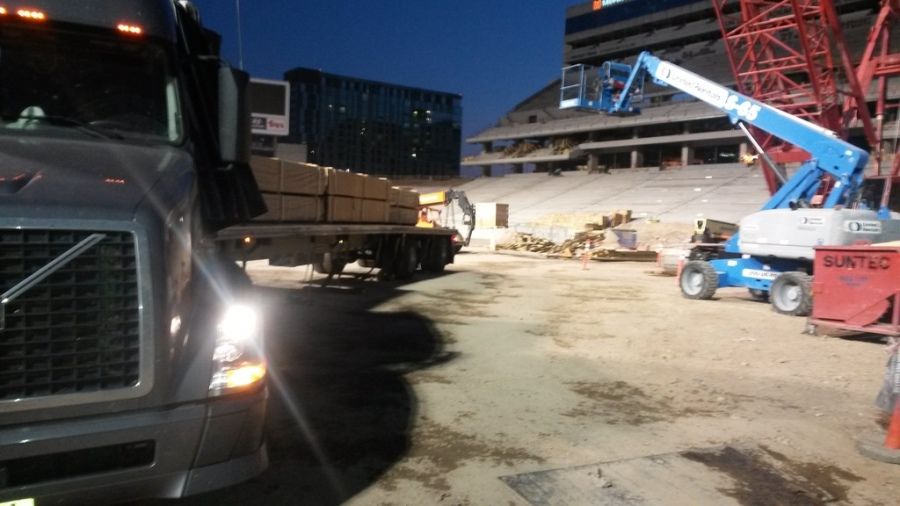 My favorite part of the load was the almost 300 yard serpentine back through an obstacle course of construction debris and materials which eventually brought you under this part of the stadium and onto what used to be the field. That was fun! 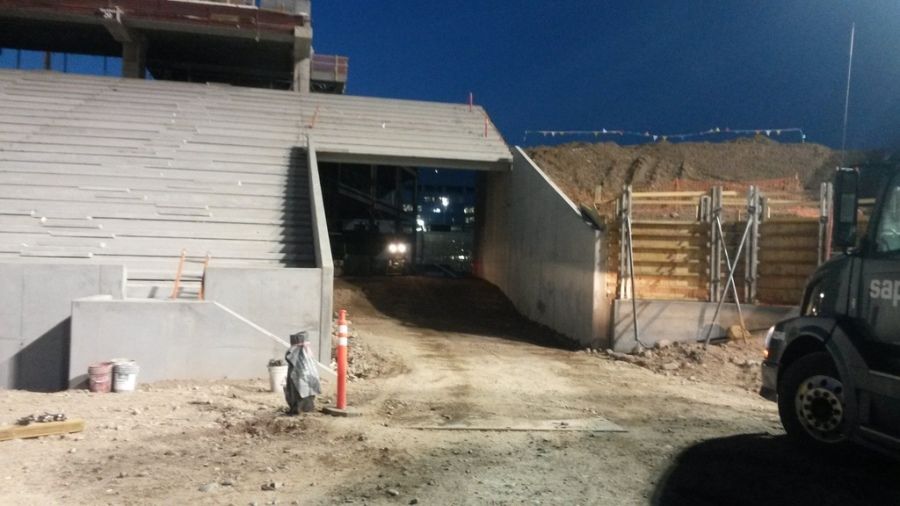 You are the man Old School!

Ok here goes on that short beam on the flatbed. These circumstances are unique to me but you may run into something similar with a spread axle where you have to place the load further back for weight distribution. When I said it was not a trick question I had forgotten about the trailer I was pulling at the time.

The trailer I am hooked to is a 40' trailer but can be stretched to 68 feet if needed. Because of this the trailer is heavier than most flatbeds are. And because the axles are a tandem instead of a spread I can only go 34k without a permit. I have no idea, because I have not put this trailer on a scale, what the trailer axles are empty but I estimated between 8 and 10k. Now I know that my truck is 11k on the drives without a trailer so I have 23k minus the trailer weight to play with. I also have a drop axle that will allow me to scale up to 43k (because of the spacing) on my drives.

So with all this in mind, the beam itself weighs 39k. So if I were to stretch the trailer to the 43 foot mark and place the beam in the center of the trailer I should be 31-32k on the drives and around 30k on the trailer. Doing this for the last 2 years I have learned that the beam weights are NEVER accurate. They are usually 5-10k over what we are told.

Knowing all this I made the decision to place the beam with a 3.5' front overhang to move the weight onto the drives. Also knowing that I had the possibility of crossing 2 open scales and 2 portable sites. The trailer is a spring ride so there is no air gauge to tell me how much I have on there. My gauge for the suspension in my truck said I had 61-62 psi in the airbags. This let me know that I was about 36k on the drives so there was no reason for me to worry about the trailer tandem weights.

The reason for not worrying is that if the weights were correct then I was only about 25k on the trailer but if the beam was heavier then I was still under the 34k because I put 4-5k extra on the drives.

If I had been pulling a standard spread axle flatbed then I would have just set that thing right in the middle of the trailer and been able to run without the drop axle down.

If you look at the beam there is a piece of dunnage under the front and another under the rear. If and/or when you have to do this, make sure to set the dunnage on top of a crossmember on the trailer. If not the bouncing of the road will break the dunnage and damage the boards or aluminum planks on the deck. Ask me how I learned this? LOL

Monday I drove 100 miles to move an excavator 6 miles then 100 miles home. Then I get a call to be at the yard by 5 am because I had to leave and pick up another bridge beam. 250 miles deadhead , 250 miles to delivery location then go back for round 2. Delivered the first beam on Wed and the second on Thursday. This beam was 83' long and weighed in at 67k. 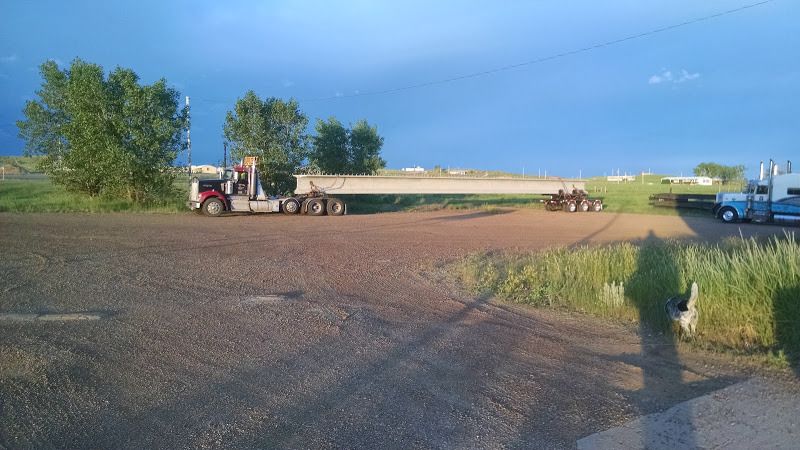 Then after that last one was delivered we hauled kester back to pick up a first for me, a steel bridge beam. Boy do those things catch the wind. And those that have driven I90 through Livingston, MT know what the winds can be like. The beam is 107'9" and weighs right at 56k. 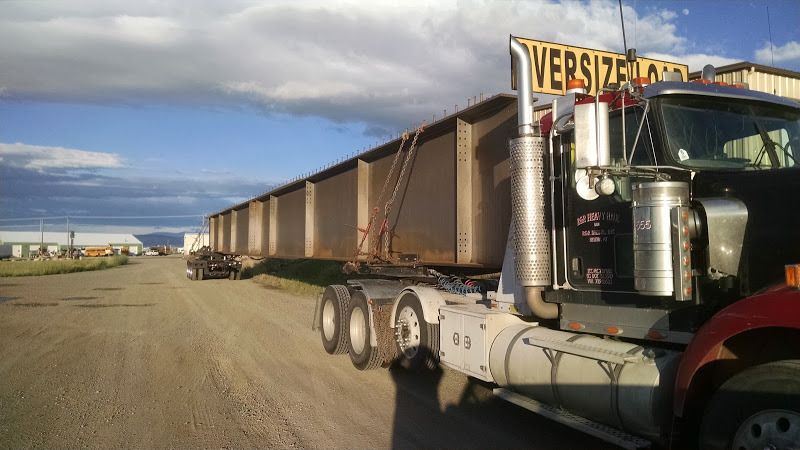 I will be hauling 1 of these steel beams every day this week.

I think that I am going to be hauling bridge beams all summer... LOL

It is a one day round trip to pick up and deliver the beam if you get your kester out of bed and into the truck. Leave at 2:30 am, load at 7 am and done for the day at 1:30 pm. I will get 5 beams hauled this week while the other drivers will have hauled in 4 beams each just because they did not get on the road early in the morning. Because of this they cannot get unloaded until the next morning.

It's all about managing your time, closing the left door and getting that truck moving. 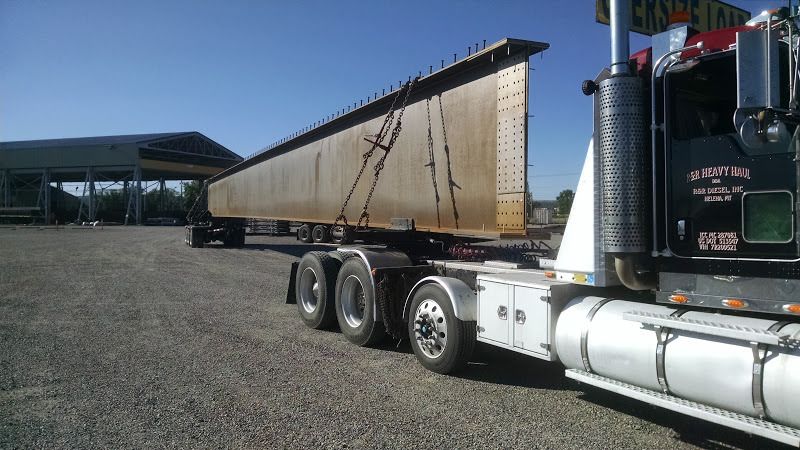 Because of this, the boss is leaving me on hauling the beams from Billings while the others get to shuttle the ones we already brought around the job site. I would hate that personally but luckily I get to run to Billings and back every day until we are done.

Pat I will be coming down the 90 in Mt on Friday so I will wave if I see you am supposed to have 3 large pumps on deck.