Lol yeah a bright shiny vest screams either "new driver" or "management" of some sort. And why does it take three of them? Wouldn't one be enough?

They're most likely to be union workers, its not suprising to see union worker that look like that on jobsites fellas!!!!!!

Well I delivered the dozer this morning and then went and picked up this manlift. Now it is not a big load by any means but it is the largest boom I have see on one of these. To give it some perspective, the deck of the trailer is 28' and the axle spacing is 60" and the basket is 1/2 way past the second bolster. 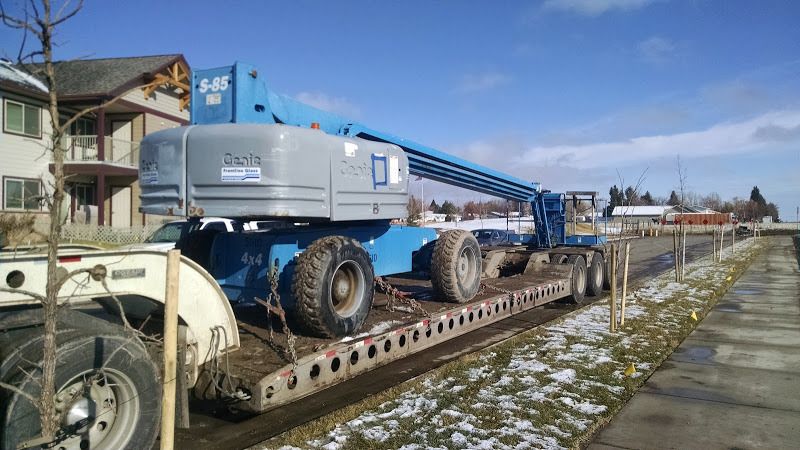 those man lifts can be fun to use during high wind conditions, When I was an electrician I went with a guy and he was scared to go up in them just to change bulbs at a main post office here in KY. I told him I'd do it so I straped myself up in a rig and went up and changed the bulbs in high winds, that was an interesting job to do, lmao!!!!

Here's our load back to Springfield where my student will test out early next week, onions from California and ultimately on to PA. 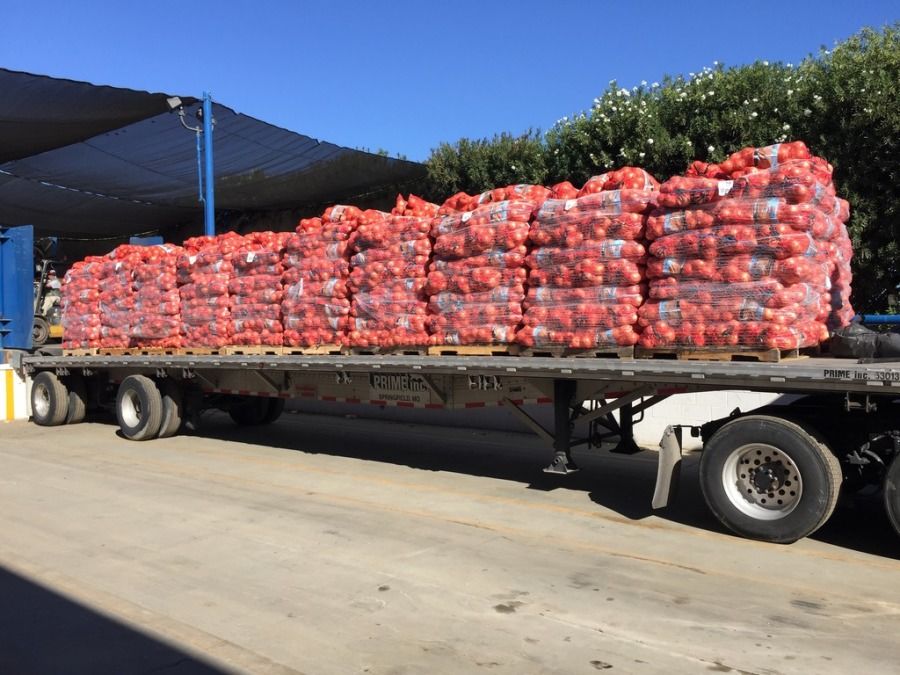 I bet that was fun to strap down, lol!!!

Whooaaaa.... Now I *would* be interested in hearing from a flatbedder how the heck you're meant to secure a load like THAT! I have no interest in flatbedding myself, at least to start out.... maybe a couple years into trucking, if I feel I need a new challenge, I could imagine wanting to upgrade my man card by flatbedding, but it'd be fascinating right now to know how to keep a giant table of sacks full of spheres from dancing around. Anyone?

Have you ever done any flatbedding before Brett, if so give us some of your experiences plz.

I have, but it was only local stuff hauling heavy machinery. We have quite a few super awesome flatbedders here that have been doing it for years and are out there turning a ton of miles and hauling some of the most difficult and dangerous stuff out there. If you want to hear more about their experiences I would encourage you to start a new topic and ask them for some insights into it. These guys can tell you anything you'd ever want to know about it. They'll be able to answer any questions you may have and really let you know what flatbedding is all about. It's certainly a very tough job so it's not for everyone, but those who do it are usually pretty hardcore and wouldn't want to do anything else.

Here's our load back to Springfield where my student will test out early next week, onions from California and ultimately on to PA.

I bet that was fun to strap down, lol!!!

Whooaaaa.... Now I *would* be interested in hearing from a flatbedder how the heck you're meant to secure a load like THAT! I have no interest in flatbedding myself, at least to start out.... maybe a couple years into trucking, if I feel I need a new challenge, I could imagine wanting to upgrade my man card by flatbedding, but it'd be fascinating right now to know how to keep a giant table of sacks full of spheres from dancing around. Anyone?

I for one have never hauled onions but from what I have seen is that the use of "V" boards on the top edges is almost a must to me, but the tarp only goes over the top and 6-12" down the sides and the straps over that. It needs to be open to get air so the onions don't start to rot under the tarp because of the heat.

So a couple weeks ago I got to use a nifty little device to lay my tarps out. I had loaded plywood near Roseburg, OR, and after rolling out some plastic over it, they instructed me to head over to their tarping station. I figured it would be one of those raised catwalks with a harness to keep you from falling, but instead I found this: 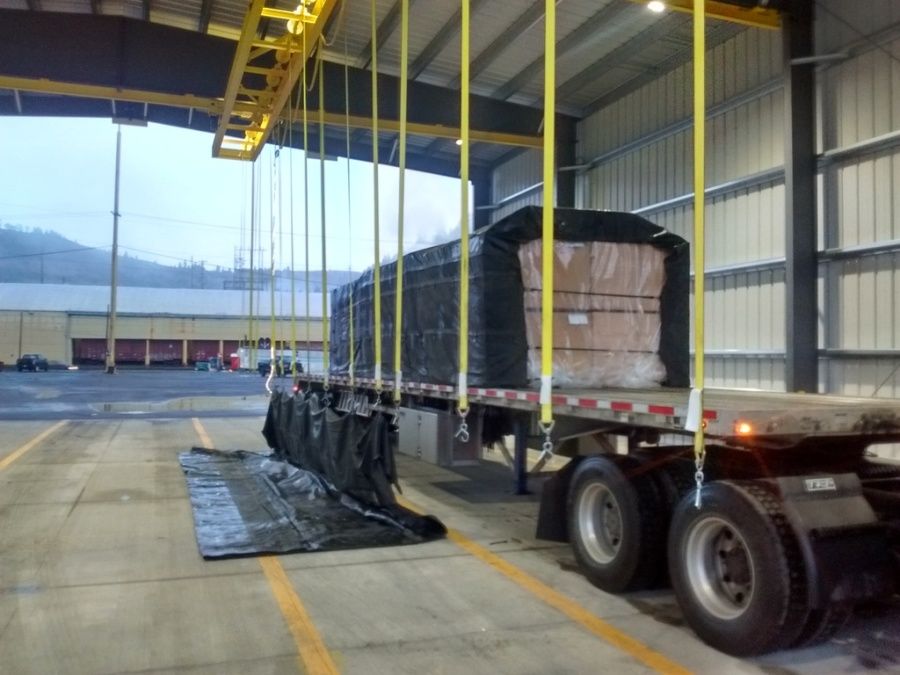 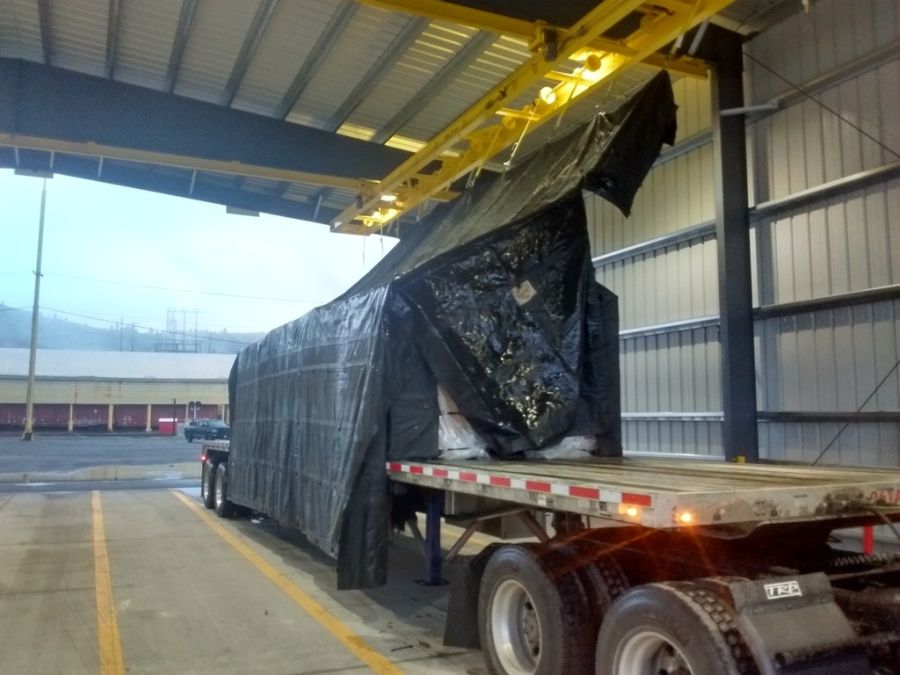 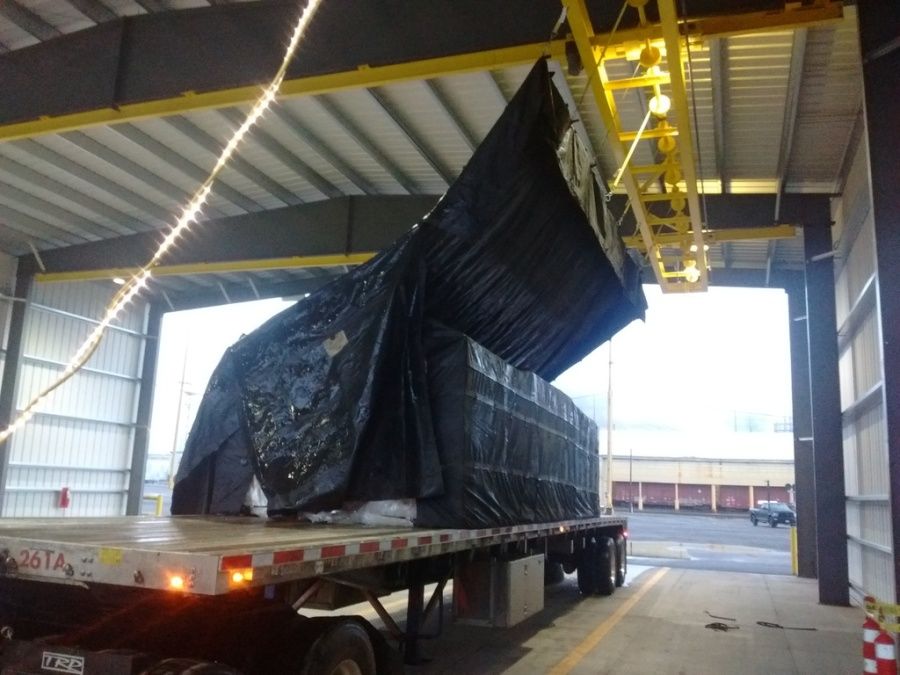 There was a video playing on a loop which gave instructions on how to use it. Basically you lower the straps with the remote, hook them to your D-rings on one side of the tarp, then raise it up and move it over, lowering the straps once the tarp is centered. I have to say it was pretty cool and obviously safer than climbing on top of a load, but it probably took just as long if not longer than the traditional way.

Here is about 45,000lbs of road salt/de-icer in 50lb bags. I loaded these in Salt Lake City, which I thought was pretty ironic. Get it? Salt Lake City...? 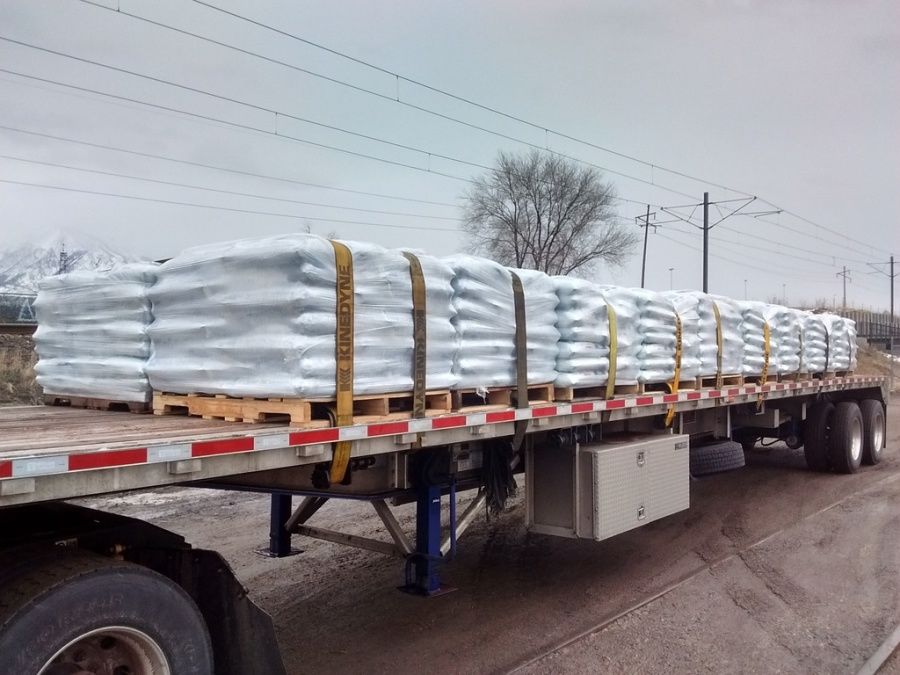 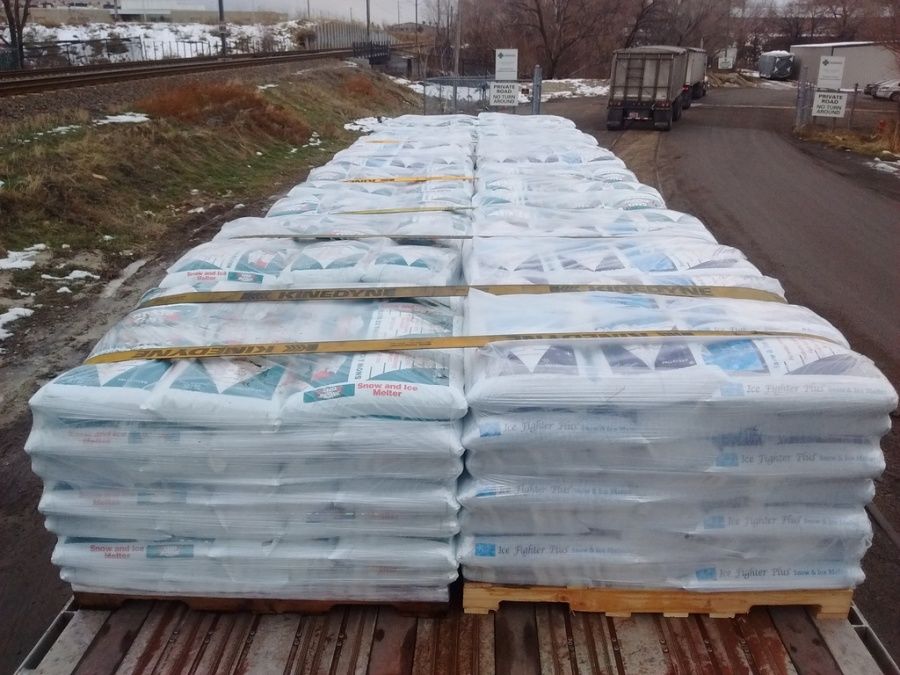 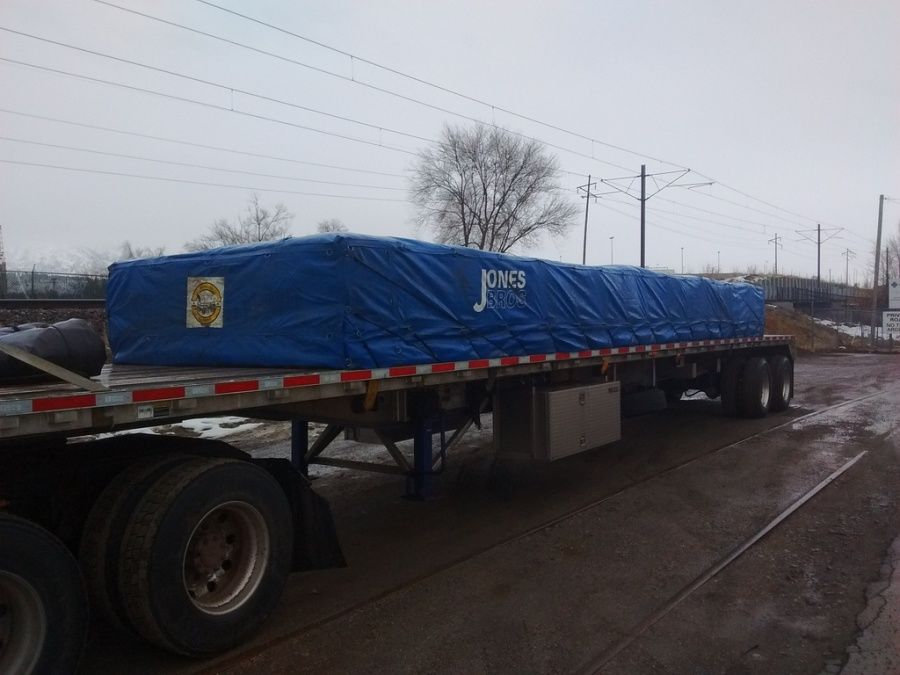 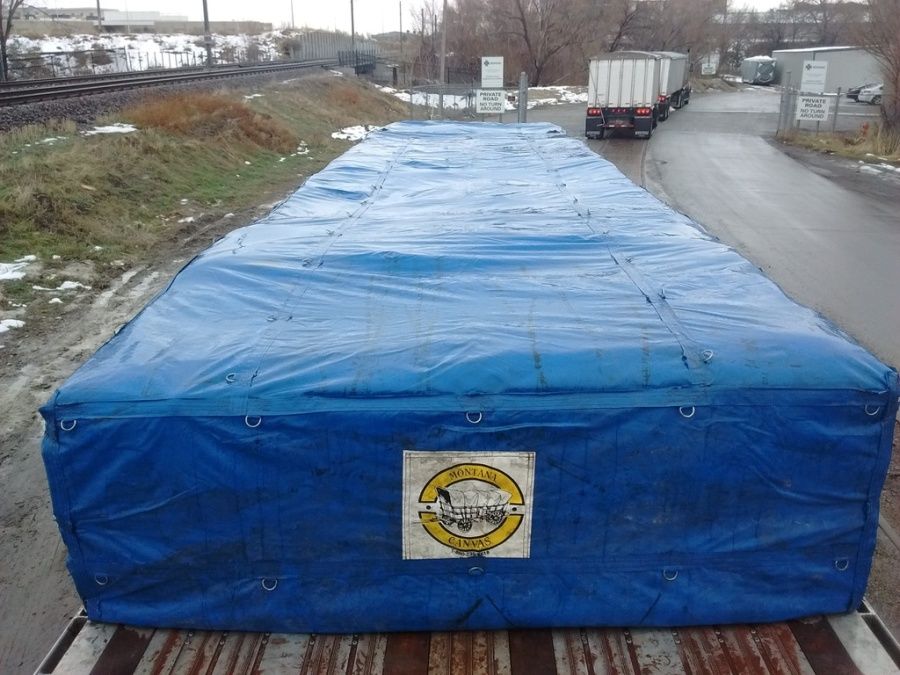 I had to remember not to make my straps too tight because if I did, they would just keep digging into the bags. Apparently the plastic wrapped around them is enough to hold them laterally, and the tarps add that extra layer of "keep-it-all-contained" protection.

My current load, waiting to unload tomorrow morning near Denver. They are part of a log structure being built at a Gander Mountain jobsite. I got lucky: there were 3 of our trucks assigned to take these logs down, and since I was the last one to be loaded, I got the leftovers. I ended up with about a 30k load, and only 2 levels high, while the others got a full 48k and 3 levels. Helped my mpgs quite a bit! 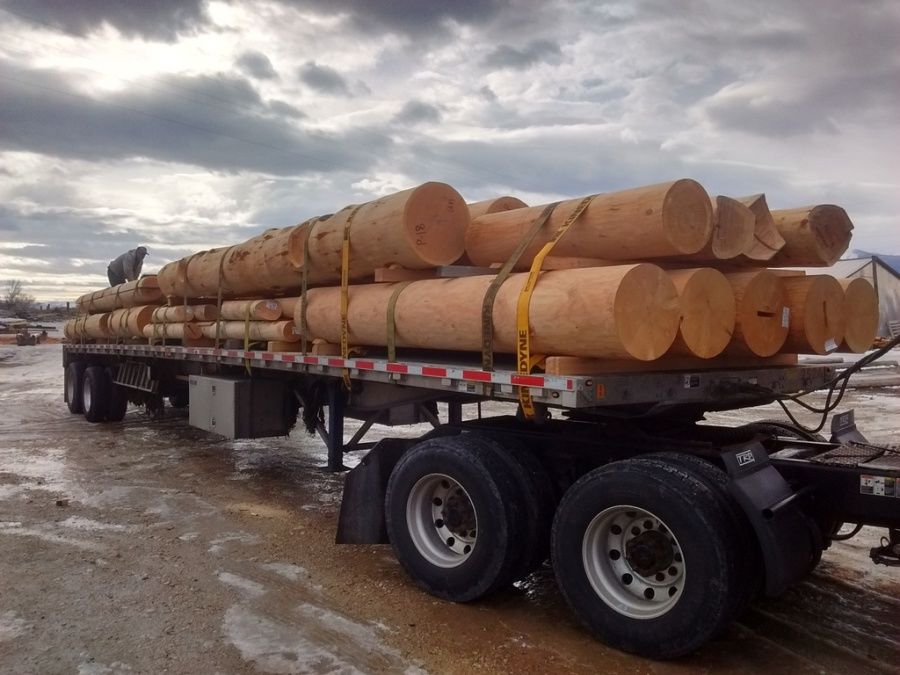 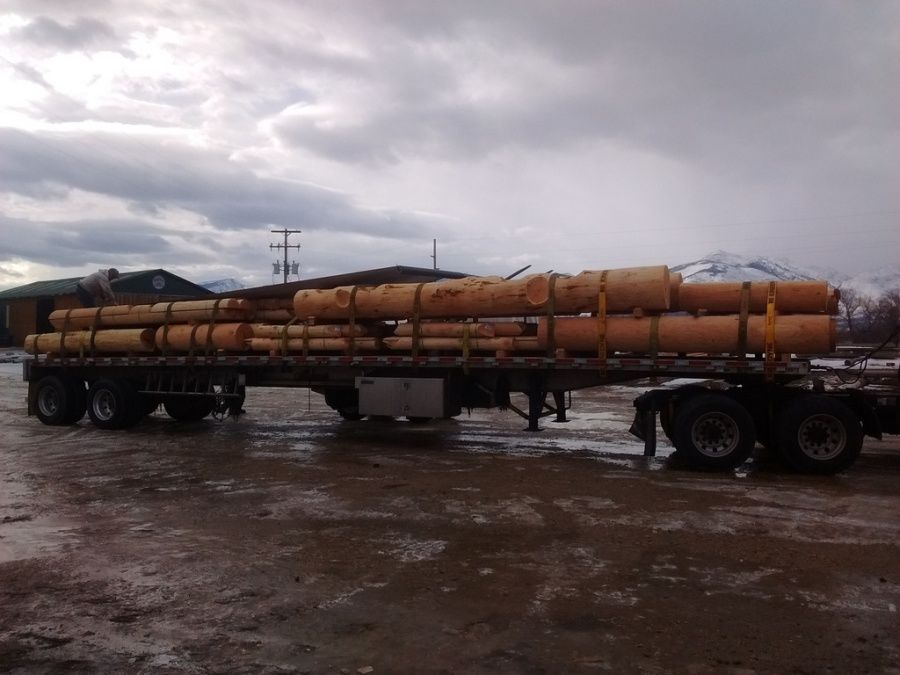 I forgot to take a pic of it tarped. I guess I could get out of the truck and take one now, but I'm too busy trying to upload the pics I already took...

no tarp pay for you on that load, lmao

Man, using that thing is almost like cheating on your tarps...LOL

Ha ha! That reminded me of something that happened probably 10 or 15 years ago. I had wrapped a present for some work function (white elephant gift or something) and one of the ladies asked who wrapped it, it was so pretty. I told her I did. She said indignantly, "You did not!!"

So Daniel, do you do the dishes at home since you're so good at washing trailers out?

I don't wash my trailers, I sweep them. But yes I almost always do the dishes at home, but that's because I'm a gentlemen.

he's just trying to get major brownie points for that comment, ROFLMAO

I'm not a flatbedder yet but I would have to say that if you had it evan on the front and hanging over the tail end that it would be considered an over size load and that would call for a permit. I hope that I'm correct in my wording as well.

Yes, onions are kind of a PITA. You roll tarps over them, fold the edges under, then throw straps over them, at least one per pallet width but I like to throw two over each pallet width (2 pallets, one each side). Extra fun of you drive through rain: stop (before it starts raining), loosen all your straps, roll the tarps down the sides, then retighten all the straps. Then once you're clear of the rain, do it reverse so they don't rot.

I honestly don't know how the reefer guys do it, watching trailer temps all the time. Give me some steel or shingles or aluminum or sheetrock, let me tarp it once if it needs it, then roll. Doesn't matter if it's 110° or -10°, it's all the same.

Speaking of 110°, here's some nice, regular wallboard all tarped up on its way to Arizona. It doesn't matter if gets hot, and the people who will unload it tomorrow aren't going to ask me to show the temperature range the product was in during the trip. So nice! 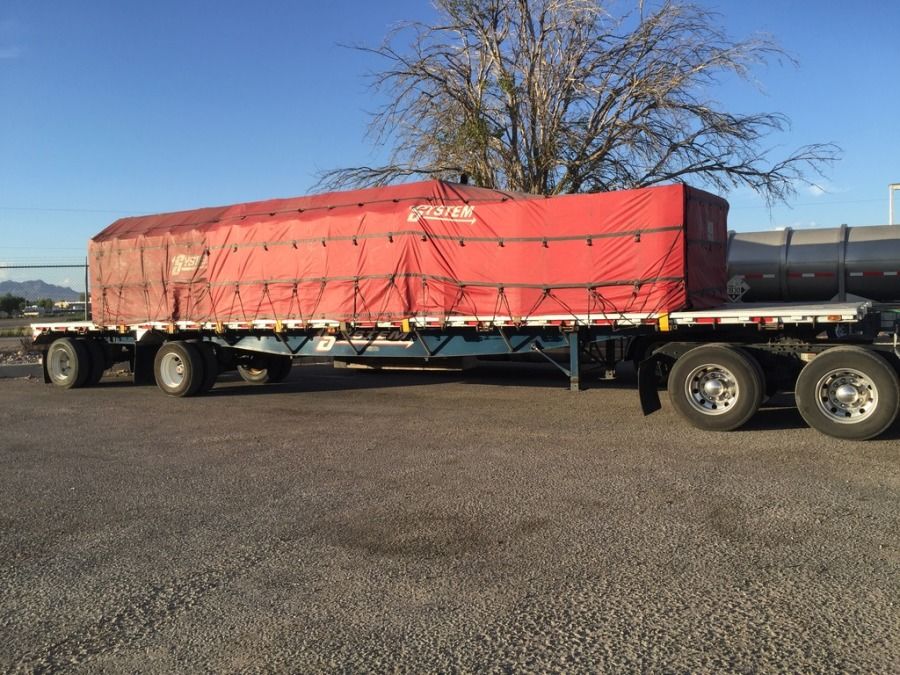 Picked up a load of custom rebar today in Arizona for delivery in the heart of the jackalope's natural range. It's kind of a messy load and I had to move a couple of small bundles around to make sure everything got some downward pressure on it. 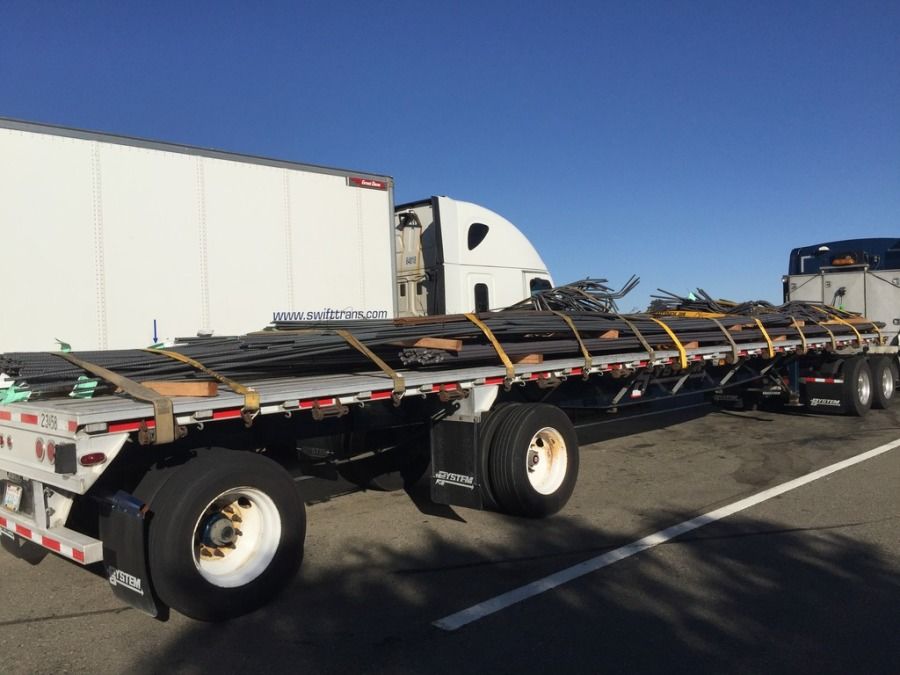