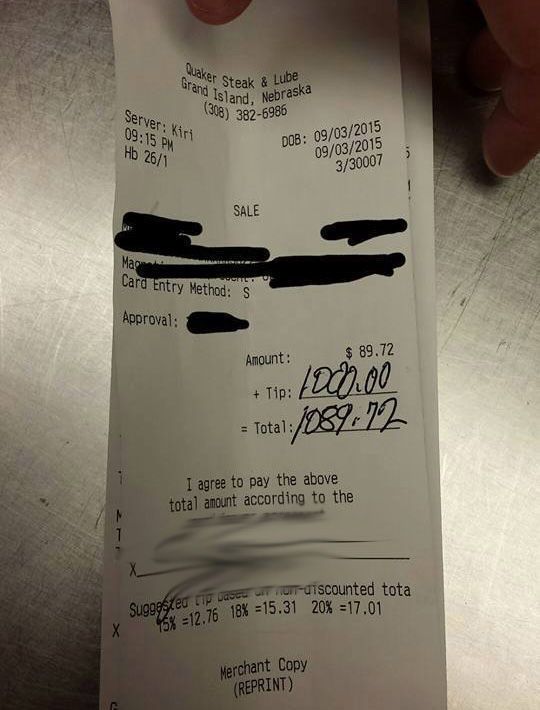 A bartender at the Quaker Steak and Lube, located inside the Bosselman truck stop on Interstate 80 in Grand Island, Nebraska, was in for the shock of her life after serving a truck driver dinner and drinks.

Bartender Kari Anthony says the driver was seated at the bar when she started her shift, and explained that he was spending the night at the truck stop after reaching his daily driving limit.

According to the Omaha World-Herald, during the driver’s meal, the two spoke about her roots in Tennessee, the importance of family, and her struggles to raise two kids on her own.

She says they were “able to relate a little bit”, as the driver also had family in Tennessee and strongly shared her views about family.

Anthony didn’t think much of it, as she’s accustomed to striking up conversations with her customers. What she’s not used to is the massive tip that the driver left after paying for his bill — a $1,000 tip on an $89 bill.

After seeing the large tip, Anthony’s manager spoke to the driver to make sure the tip wasn’t made in error. After 10 minutes, he returned to her and told her that the driver “insisted on wanting to leave the tip.”

The driver then told Anthony to “do something good for her kids” with the money.

Anthony says she was “really nervous and shocked” and was shaking as the driver insisted on giving her the tip. She says she’s extremely grateful for the kind gesture and was able to take her kids out to the State Fair, something she would not have been able to do otherwise.

Must be an Owner Operator!

I tracked this news article back to the Grand Island Independent - G.I. bartender stunned by $1,000 tip

I'm not an "owner-operator," and I have money in the bank. If I don't spend it, I have to declare my checking account balance on the 1040T (for truck driver), after which, the government just takes it.

This is from the original Grand Island Independent article:

As the bartender, [Kari Anthony] said, she engaged the gentlemen in conversation like any other customer. She said he had a few people around him who he was also talking with. He paid for their meals and drinks, too.

I wonder if can claim the full bill on his taxes... from my understanding you can claim meals and this could not only be him being nice but also a way to lower his taxable income.

For those who don't understand tax brackets let me explain what I learned in income tax class a few years back. your tax bracket is based off your "taxable" income. Start with your w2, then factor in things like filling status, dependents, etc, then you throw in deductions and what not... so say you made $40,000 gross last year, that's not your taxable income, you got the standard deductions for filling status, then say you spend $5,000 on things you are allowed to deduct. not counting your filling status your taxable income is now $35,000.

based on that he could have been lowering his taxable income to put him in a lower tax bracket so he pays less taxes and gets more back when he files. gotta be careful doing that cause not everything can be deducted and sometimes there's limits plus if employer reimburses you (per diem *cough cough*) you can't deduct it. Also since it's a deduction not a credit you're not going to get that money back, it's just lowering how much your income is taxed which in turn lowers the % of pay you pay in taxes. if your current taxable income is close enough to the next lower tax bracket this could be advantageous (10-15% tax rate instead of 15-20%) but if you are like $15,000 higher than the next lower lv bracket (with normal deductions) you'll probably spend more than you would save and then you're just being friendly.

I'm not saying he wasn't doing this out of the kindness of his heart but I feel there's more to his intentions than JUST that.

Also my tax knowledge may be a little outdated as I took that class like 4-5 years ago and tax laws change every year, but you get the general idea.

Also the nice things about w2s, since your tax bracket is figured out at time of pay not when you file you pay more in taxes now but if your tax bracket turns out to be lower at time of filing taxes because of things like deductions, you'll get the excess money you paid back for a bigger refund. unless you owe for some reason but that's a different issue. stay tuned next week when I teach you about other tax issues :P just kidding. like I said my knowledge is not 100% accurate but it's good enough to get the idea.

I wonder if can claim the full bill on his taxes... from my understanding you can claim meals and this could not only be him being nice but also a way to lower his taxable income.

I think it must be a hobby of mine to go look for tidbits of "real" information. Sorry. But here's an answer from IRS's Publication 463, Travel, Entertainment, Gift, and Car Expenses:

I'd say, probably not fully deductible.

Do you at least leave a tip (3+ dollars) for the folks that clean the showers? I do. And I thank them too. It is that easy.

This is what shocked me. What *did* he eat for that much. I know it said drinks were included, but what is a truck driver drinking that would not get him in trouble?? Perhaps he just paid for others' drinks and didn't consume adult beverages himself?

This is what shocked me. What *did* he eat for that much. I know it said drinks were included, but what is a truck driver drinking that would not get him in trouble?? Perhaps he just paid for others' drinks and didn't consume adult beverages himself?

I think you missed Errol's reply above where he posted that the driver paid for other people's meals also.

Truck Driving Stories
Click on any of the buttons above to view topics with that tag, or you can view a list of all forum tags here.