With Christmas coming I wanted to start getting "supplies" for the sleeper. I am wondering what kind of toys and appliances drivers are putting in there. Also are there regular plugs or cigarette lighter sockets?

Any help would be greatly appreciated.

Also right now my decisions are between HOW and DOT Foods. Any opinions for either would be greatly appreciated.

I don't really have any toys to speak of aside from changing some interior lights to led and adding a couple colored lens covers. I do have a crock pot and microwave for cooking and plan on building a mount for a fridge this weekend. I don't really need a tv or any of that stuff since I read books on my phone and try to get exercise between driving and sleeping. Also, try to remember that having all the toys is great but if your truck goes in the shop and you wind up in another one, you have to switch it all over or might come back to find things missing.

I'll think of other things. And yes, I'll fit everything in there and it will be neat and clean as hell.

PS can you tell I am a girl and have a fetish for SOFT surroundings? lolll

I hve can soups noddles lunch meat bread just to name a few. GPS and CB radio. Microwave would be good to hve. A coffee pot if u drink would be good as well. Labtop to watch movies if u hve spare time. And a converter to plug in microwave computer coffee pot when needed. Since getting cold thick ass blankets and pillows. Mke it to ur comfort zone to your best ability. Try to keep from eating out as much save money.

With Christmas coming I wanted to start getting "supplies" for the sleeper. I am wondering what kind of toys and appliances drivers are putting in there. Also are there regular plugs or cigarette lighter sockets?

Your truck will have 12vDC "cigarette lighter sockets" unless you have an inverter installed to give you a couple 120vAC standard household outlets. But stick with 12vDC stuff as much as possible.

The basic "toys and appliances" that most truckers have/want on board are:

An electric cooler OR mini fridge: You can get a suitable 12v Coleman or Igloo cooler that will do the job for about $100, or if you wish to spend more and get the best, you can opt for a portable 12v fridge/freezer such as the ones made by ARB, Engel, Whynter, and EdgeStar (there are others as well), which will cool much faster and more efficiently, have adjustable temperature controls, can keep food frozen, and will last longer, but will cost you much more starting at around $500 on up depending on size and features.

A 12v electric cooker: This can be an electric skillet, slow cooker, "lunchbox" food heater, or really anything you can plug into a 12v socket and heat up some dinner with.

A 12v coffee pot or percolator: Nearly all truckers drink coffee on a daily basis, and having your own coffee maker on board is perfect for if you're not near a truck stop or don't want to pay truck stop prices for coffee when you can make your own fresh for pennies a cup.

A microwave: This one is debatable and certainly not every trucker has one or wants one, but it does come in handy for a quick hot meal. Beware you should get the lowest wattage microwave you can find and even then you will need a very good power inverter to power it, and it will generally need to be a "pure sine" inverter which is about twice as expensive as the more common "modified sine" inverters, or you risk damaging the microwave and your inverter. This makes the microwave a costly investment for your truck unless you already have such an inverter, but one that some truckers just can't do without.

A good power inverter: Again not a necessity, but its what you'll need to run anything with a normal household plug, and many truckers don't want to live without one on the truck. As mentioned in the previous part about the microwave, there are 2 basic types of inverters, "modified sine" and "pure sine". Modified sine inverters are the ones you see most often because they are relatively cheap for higher power levels compared to a pure sine inverter, and modified sines can still power many things. Where you need to spend more for the pure sine inverters is anytime you plan to power sensitive electronic devices. Basically anything with microchips will function much better with the pure sine inverters. I could go into technical detail here as to why, but as this is a trucking forum not an electronics engineering forum, suffice it to say that the pure sine inverter provides a much "cleaner" electrical signal that is basically an idealized form of what comes out of your outlets at home, while a modified sine inverter creates a much "rougher" and "dirtier" form of power than what you get at home. It will still power things like a hair dryer or fan or most household items, but computerized and sensitive electronics can be damaged or function improperly on modified sines.

A laptop: Nearly all truckers these days have a laptop, it is generally the single most used entertainment device on the truck as you can use it to surf the internet, watch movies, check and write e-mail, chat with friends, and even do your taxes or catch up on some reading. Make sure if you don't have an inverter on your truck, you get a 12vDC vehicle charger for your laptop.

A cell phone: Obviously every trucker these days needs a good phone, and there are many discussions here and elsewhere as to which company to go with and why. Make sure you invest in a decent hands-free headset or bluetooth earpiece so you can answer calls on the road. Remember, texting or talking on the phone while driving a CMV WITHOUT a hands-free earpiece could get your CDL revoked and cost you your job, as well as major fines and even possible jail time. Be safe out there.

Tablets / E-readers / game systems / satellite TV / foot massagers / electric potato peelers / etc.: Many other entertainment devices exist, some of them are important to some people, but none of them are truly necessary and most truckers rarely have time to use most of that stuff much, but if you want it on the truck with you, and you have the means to do so, then by all means go for it. Just keep in mind, whatever you pack into the truck, has to be cleaned out (sometimes quickly) later if you swap trucks or take an extended leave of absence or get fired for some reason, have to slip seat while your truck is repaired, etc.

The truly simple life truckers might have little on their truck other than clothes, bedding, and a good book. :)

We also have an excellent List of Items To Bring To CDL School, Training, and OTR so have a look at that for ideas......

P.S. Some people prefer "rougher" and "dirtier" … it's usually cheaper too! 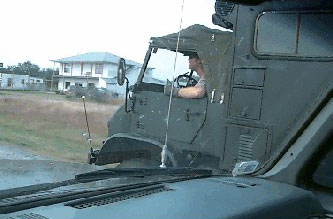 Again I am just throwing this out there not as a truck driver but someone with a few expeditions under my belt. In fact being prepared saved my life in a 2 month stranded in the middle of nowhere ordeal.

I watched Indianajacktrucker on youtube talking about having backup food supplies in case you get stranded (like in a snow storm) and have no access to food. To elaborate on his idea: The best defense is having backup food that does not spoil, is easy to move (slipseaters), you are not temped to eat when to lazy to stop or walk to the truckstop, and will not freeze.

I have used and eaten these and they are really good in an emergency. Comes in a bucket w/handle that is easy to store under your bunk. Need-To-Know: They do need to be heated, add water (water should be stored too - a water brick is good).

I am not a trucker and maybe this is being over prepared and maybe since my ordeal I am just paranoid. lol