Since we kinda have a thread about trucking songs, I was wondering what movies/tv shows, either about or featuring trucks, do y'all find enjoyable? Old classics, and new stuff alike. I like "Black Dog," "Big Rig (documentary)," and of course "Smoky and the Bandit."

Robert B. (The Dragon) yes, I breathe fire and other sideshow tricks
Indianapolis, IN
Experienced Driver
Posts: 1939
Joined Us:
5 years, 2 months ago
91 Photos

Convoy, can't forget that one.

Convoy, can't forget that one.

To be honest, I'd never heard of that movie until recently, and only then because the trailer of the movie was set to one of the songs listed in the song thread.

I don't think it is best or worse but 'Convoy' by CW McCall needs a mention. A #1 hit on Country and Pop charts. The song impacted popular culture and contributed to the CB craze of the 70's.

And gave us Sam Pekinpah's most successful movie!

Do not watch Smokey and the Bandit 2, it will ruin your love of the first one.

Pekinpah tried to make more than just a quickie song->movie movie when he made Convoy. He had a vision of making something a bit more than a genre movie. Yeah, it's loaded with stereotypes and tropes, but he did try. He also cast black actors and made an interesting action/adventure movie.

Fun fact, James Coburn was his pal and did some of the second unit directing when Peckinpah was sick. Sick from cocaine and alcohol, but sick nonetheless.

Some other movies about trucking:

Then there is Roll Out a single season sitcom that aired in 1973. It's loosely based on the movie Red Ball Express. That they were able to air twelve episodes was remarkable, not because the show was bad, but because CBS put this show up against ABC'sThe Odd Couple. It didn't win its time slot and was cancelled.

These aren't "trucking movies" per se but they do feature truckers or truck driving in some way:

The Wizard (a young Fred Savage tries to get his video-game-prodigy little brother to a tournament in California, and at one point hitches a ride with a friendly trucker)

Breakdown (Kurt Russell's wife is kidnapped by truckers, or some gang associated with trucks, I think) 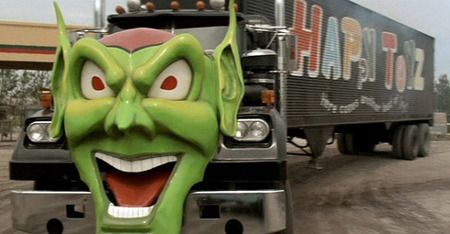 I remember that one... Great soundtrack... AC/DC "Who made who."

Another one... "Duel" starring Dennis weaver as a terrified four-wheeler being stalked by a psycho tanker driver... That one gave me nightmares when I was little

Entertainment Truck Driving Lifestyle Trucking Humor
Click on any of the buttons above to view topics with that tag, or you can view a list of all forum tags here.