There is nothing that says that I can't have a Louisville Slugger as a tire thumper and head basher if I need it to double as such. :)

That IS true...but don't EVER say you had it as a head thumper...ALWAYS say you used it to check tires and that it was the only thing you had to defend yourself with when/if you have to...just a little free advice from a former LEO..

There is a federal Safe carry law that applies to firearms which protects anyone with a fire arm on US highways. You do have to have the firearm secured, in a locked case, and not have it with in easy access of your person, and also have any ammunition stored separately. Now, all that being said, most truck companies prohibit a weapon of any kind in their trucks. You could be fired for having one. Also, in Port Zones, if I am not mistaken, they are still banned, so if your shipper or consignee is an international business that does business over any border, they have the right to search any vehicle that comes on their property for things like weapons. And of course if you are going into Canada or Mexico, you could go to prison in both countries for having firearms.

I am a gun owner, but I do not carry on the road. I keep my firearm at home with my wife, since she is there by herself. I have never felt threatened in my short 6 months out here.

Couple of weeks ago, we were in Portland OR and got a load heading back to St Paul MN. It was for a "Card Company". Not listed as a high value load, not given any extra security precautions, and when we picked up, they did not even provide a seal. It was 2 pallets. So here I am thinking these must be some kind of artistic valuable greeting cards or something. We got to the consignee early, and they had one active dock, and there was a truck in there. It was about 3 AM, so we walked over, as his interior lights were on. He opened the door, and we started talking, and my co driver noticed he had a shotgun in a rack, and a auto pistol on his side. So we asked him whats up. He asked us, if we had any idea what we were hauling. It was 2 pallets of bank cards. He was a regular hauler for the company, and told us, they required him to be armed.

I agree it probably wouldn't be a good idea. I'm from a farm town so everyone pretty much everyone has a knife on them. It's looked at as more of a tool than a weapon. I carry an M48 combat tomahawk in my car it's considered a tool. I'm not as trusting as some people are from personal experience.

I agree it probably wouldn't be a good idea. I'm from a farm town so everyone pretty much everyone has a knife on them. It's looked at as more of a tool than a weapon. I carry an M48 combat tomahawk in my car it's considered a tool. I'm not as trusting as some people are from personal experience.

Sorry for the language (female dog). 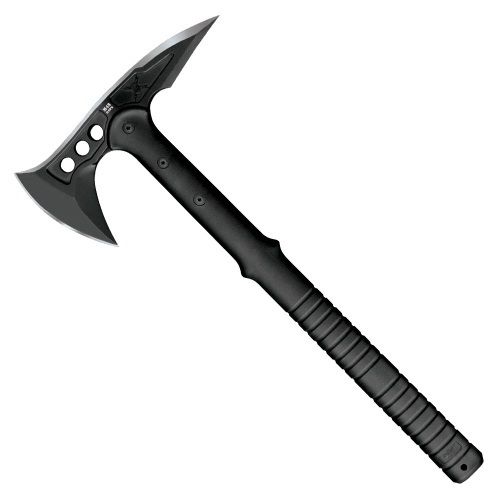 Yeah... That wouldn't be allowed. Just buy a nice tire thumper and use it as a weapon if you need to.

There is nothing that says that I can't have a Louisville Slugger as a tire thumper and head basher if I need it to double as such. :)

It appears based on numerous entries above that it is NOT a best practice to consider carrying a firearm. There have been good recommendations for other objects that can be used as weapons (if ever needed). Another consideration is a an un-greased bike chain. Assuming you are not being held at gun point but are being threatened physically, one good whip across anyone's face will do pretty drastic damage and only costs around $10.

As others have stated, the best defense is awareness. Also, any self defense instructor will tell you, your stature and how to carry yourself can sometimes discourage an attacker. If you walk hunched over, slow, with your head in your smart phone it makes a much more atractive target than someone walking with a firm-straight posture who's looking around at their surroundings.

As a female this was my biggest concern for sure however my trainer taught me this. Carry your truck key between your middle and pointer finger and press the end with your thumb. Its an instant weapon to stab someone in the neck and they will bleed out. Its also inconspicuous. No one would give 2nd thought to you carrying your truck keys. Simple and easy and you already do it

Ok I give up trying to make this post on this thread work at this time.....

The short version is please point out what law (I want the number of the law in the green truckers book in the truck) that states its illegal to carry a gun in a truck.

There simple is not one and you will not find one. What makes it a bad idea is the LOCAL and STATE laws.

Not only is it against almost every company's policy out there but the minute you pull into a weight station it is illegal to have a firearm on that property. Not to mention most customers forbid firearms on their propery.

As you stated ,the moment you pull into the scalehouse property with that firearm in your possesion(in the truck) you've violated the law .Nuff said.

One way to circumvent this ,if you absolutely must have some sort of firearm in your possesion,is to purchase and maintain a flaregun in your vehicle .Legally this is a safety device even though the flares are contained/propelled by a cartridge very similar to a shotgun shell.Personally I wouldn't want to be on the recieving end of a blunt object hitting me at high speed and clinging to my body while burning at 2000 degrees...;-)

One way to circumvent this ,if you absolutely must have some sort of firearm in your possesion,is to purchase and maintain a flaregun in your vehicle .Legally this is a safety

Of course if the thing goes off in your truck it's going to burn it to the ground. Probably not a good idea.

Firearms Life On The Road Truck Driver Safety Understanding The Laws
Click on any of the buttons above to view topics with that tag, or you can view a list of all forum tags here.