Page 1 of 2 Next Page Go To Page:
The Persian Conversion's Comment

See that? I'm applying for a trademark :)

OK so I think it was stop 8 of a 9-stop Challenger Lifts load, delivering to a high school body shop in Edmonton, AB Canada. This was probably late November if memory serves, so there were already accumulated snow banks on the sides of the road.

Here is an overview of where I needed to go: 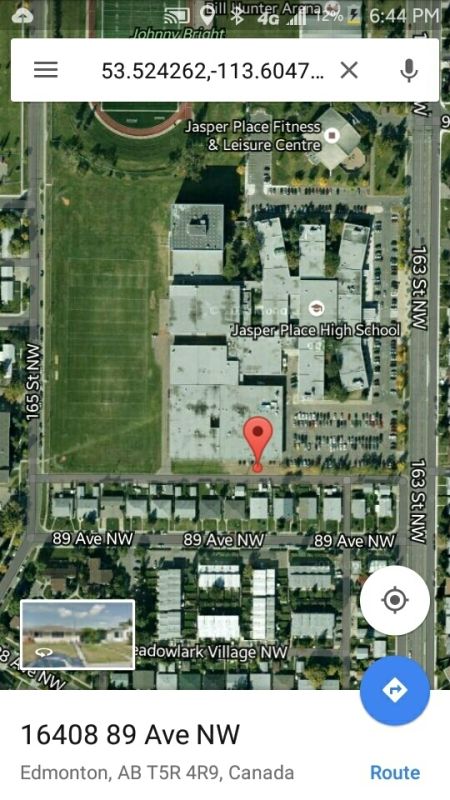 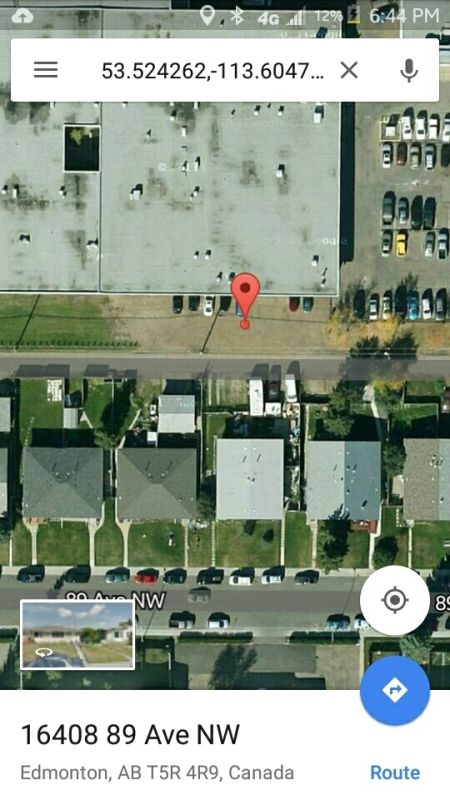 They wanted me to park horizontally on the brown spot so they could bring their forklift out from the building to the north and unload their item.

The road was just a narrow one-lane alley with residential houses on the south side.

There were only two possible ways in. From the west... 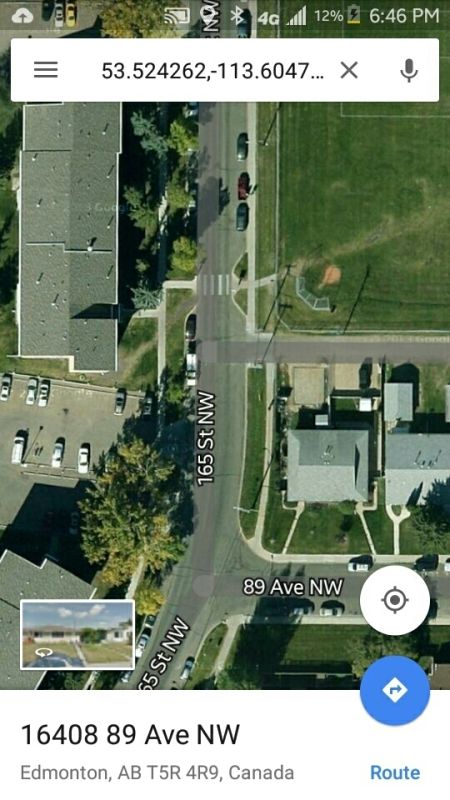 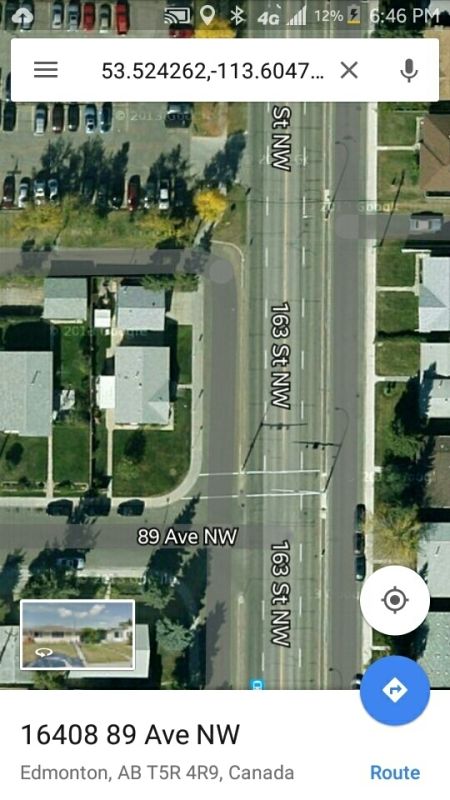 Coming from the east, you can't just make a wide left turn from 163 St, because there is a large curb with several signposts between the main road and that little side road adjacent to the house. The curb opens up at 89 Ave, so if you want to go in (or leave) that way, you'd have to go through there first.

From the west, notice the 2 utility poles on either side of the alley entrance (you can clearly see their shadows). These are about a car length apart. Also, the satellite picture is surprisingly accurate: there were 2 cars parked in almost the exact same position directly across from the alley entrance, in front of the apartment building to the west, albeit just a little farther apart on that day.

I had to circle the high school twice before I finally settled on a plan, and thankfully there was a good Samaritan who helped spot me, otherwise I might still be up there!

Keep in mind that there is no way to turn around once you're in the alley; however you go in, you'll either have to back out the same way, or head straight out the opposite side.

Oh, and one more thing: you're pulling a 48' flatbed with tandem axles fixed at the very rear of the trailer, so there is no way to slide them up for a tighter turning radius.

See that? I'm applying for a trademark :)

I noticed that immediately and burst out laughing! You recognized a good idea when you saw one.

I really like these puzzles. We'll create a tag here in the forum for these so we know how to find them all in one place.

I might have to create a section on the website for various types of puzzles like these. What an awesome learning tool that would be. Present real life scenarios that drivers face out there to help people coming into the industry understand just how difficult it is making decisions on the fly like that all the time. Whatever challenge you're facing at the time you simply have to figure it out and overcome it. Failure is not an option. Daniel B and Old School and others have also shared quite a number of awesome scenarios they've faced out there.

I snuck in and used Street View. You can actually go down that alley. ... and you can still see PC's tire tracks!

Driving from the north ("down ") on 165th, the left turn starting at the right curb should give you bare inches of clearance between the two poles.

On the 163rd Street exit, it looks like you can turn right, missing the signs, and hopefully stick in the side street, but the low curb can take it if you have to go over it.

I produced and used the "prior art" of "Backing Practice", so don't think you can trademark it.

1- There really wasn't enough room to make the left turn from 165, there were cars parked all along the side, and there's a portion of curb/lawn which juts out where the crosswalk is, forcing you to keep towards the center of the street. With the long wheelbase of the trailer and the narrowness of the alley (preventing you from keeping your angle as you turn), it's pretty much guaranteed that you would swipe the side of the trailer against that northern utility pole.

2- Same kind of issue exiting on 163. The 2 signposts directly east of the alley would have limited how far you could pull out before having to start your turn, so you see that chain link fence belonging to that house? Yeah, you could say goodbye to that.

The teachers at the school did say that delivery guys usually do just hop the curb from 163, but he also said that they have always had shorter trucks come through, never a full-size OTR big rig

I should mention that I did it without hopping any curbs, except for one brief moment with just my steer tires...

I snuck in and used Street View. You can actually go down that alley. ... and you can still see PC's tire tracks!

Driving from the north ("down ") on 165th, the left turn starting at the right curb should give you bare inches of clearance between the two poles.

On the 163rd Street exit, it looks like you can turn right, missing the signs, and hopefully stick in the side street, but the low curb can take it if you have to go over it.

I should mention that I did it without hopping any curbs, except for one brief moment with just my steer tires...

This is advice for everyone....

Obviously a steer tire blowout is extremely dangerous so be super careful about what you run into or run over with those steer tires. When you do have to run over a curb or through a big hole or something it's best to make sure the tire is pointed straight at the obstacle so the tread hits it the obstacle and not the sidewall. If you rub a sidewall along a curb or the sharp edge of a pothole you can easily create a weak spot in the sidewall that is then more prone to blowouts. And of course it won't blow out until you hit the next pothole going 55 mph and now you're in big trouble.

Persian, this wasn't directed at you. This is just one of those things that new drivers probably won't think about or understand so I wanted them to understand that important point.

No problem Brett, I'm still a new driver too so I'm always open to learning something new. Good to know!

Thankfully on that day, I put the steers over the curb almost dead-on straight, and of course I went as slow as I could :)

Ok I'm bumping this back up to the top to see if anyone else has a guess before I reveal what I did... And because I want my thread to have more responses than Errol's

I would have either parked in th "employee lot" or on 89th near the alley closest to 165th and persuaded the school to unload their merchandise from there.

I'm not ignoring this. I've been studying it since you posted and I haven't come up with a perfect solution. I don't think backing out would be possible so leaves driving forward to escape. Getting into that alley might involve a lot of seesaw to make the turn from the west. I guess that's what I'd try. Enter from the south west.

Backing Challenges Photos Tips For Backing
Click on any of the buttons above to view topics with that tag, or you can view a list of all forum tags here.