A Critical Piece In The Puzzle Of Success At Trucking

Hello Ernie, great to hear from you again! I know you are in here at times, but it is always nice to have you speak up every now and then.

I just want to say a few more things about this now that we've had some more feed back. Fatsquatch is right when he says there are more benefits than just good miles when you maintain a good relationship with dispatch. I've mentioned a lot of times in this forum about special treatment that I've gotten because my dispatcher knows that I will do whatever he needs. It is a sort of relationship where there is some give and take on both parties. I didn't tell you guys about it this latest time, but I had to be home for some more surgery recently. I've been dealing with some nagging issues with skin cancer. I've gotten all the time off that I need, and been able to take my truck home for extended periods of time without any mention of turning it in until I can return.

The reason dispatchers love a driver that they can always count on is simple. We always stress in here about how the pay in this business is performance based. I can't speak for every trucking company out there, but most of them pay their dispatchers a base salary with incentive bonuses for their levels of productivity in moving freight with their drivers. When a dispatcher has the type of driver that is always getting things done with little or no problems, that driver is not only valuable to that dispatcher for his peace of mind, but he is also valuable financially. My dispatcher recently said something to me about how his wallet would take a huge hit if I ever quit! It becomes in his best interest to keep that driver happy and busy. This becomes the drivers responsibility to make this all happen. The more dependable you are, the more you will be depended upon.

I had my latest surgery last week, and I had told my dispatcher that I would come back over to the plant in Delhi, Louisiana on Monday, but my plan was to get there and then take a ten hour break so that I could start on Tuesday with a full clock ahead of me. Typically we have better loads leaving that plant on Tuesdays anyway. As I was driving to the plant, my phone rang and it was my dispatcher. He was distressed because it was his first day back from a vacation he had taken while I was out, and he had just discovered that one of our new drivers had dropped the ball on a load that was supposed to leave the plant on Saturday. When the dispatcher got to work Monday morning the folks at the SAPA plant were giving him grief because the loaded trailer was still in their yard. He called me to see if I would take the load which was already going to be late and try to make up some time on it. This is a good example of how these guys will depend on you. I'm finishing that multi-state and multi stop load tomorrow, with the only drop that was late being the very first one. I somehow managed to get it done, but it wasn't easy. Total miles in in six days came to 3,038 plus I got about 235 dollars in accessory pay, and I have a pre-plan on me with a load that gets me back home so that I can get my stitches removed! What more could you ask for?

As far as having a bad dispatcher goes, I'll just share my experience in that area. Some of you old timers in here will remember when my dispatcher at Western Express quit. I was really frustrated because I had worked really hard to establish myself with him and then one day I got this message on the Qualcomm that said. "Hello, I am your new dispatcher. So and So quit, and you have been transferred to my board." That was it! I met the new guy a few days later while I was at the terminal for some service, and we did not click at all. He was a young punk in my opinion, and he looked down his arrogant nose at me like I was some kind of a dinosaur that he was sure would be useless to him! I was really feeling devastated. Fortunately a unique thing happened just the following week. Out of our approximately 4,000 drivers, I had met the requirements to be honored as "runner up driver of the month." Now, I didn't have to prove myself all over again. Immediately this new dispatcher who did'n't really seem to care about me a few days before was sending me messages saying how he hadn't realized "what kind of a runner" he got when he got me. From that point on I continued to keep him happy with my results, but he never was the kind of person I would ever want to be friends with or even to sit down with and share a cup of coffee.

If you can produce consistently good results you will be rewarded with all the best loads, and the favors you need at those times of special needs. It is a precarious position to be in at times, but it is well worth the efforts you will put in to maintain that kind of relationship.

Best of luck fighting that cancer, Old School. I'm all too familiar with it as it runs in my family. 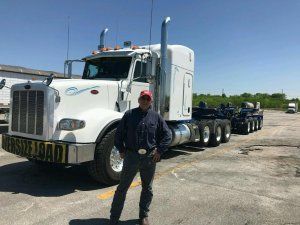 Old school you are so right! I'm a rookie too with 6 months of rubber on the pavement, but like you, I'm of the mind that you get more out of life by busting your tail then by sitting on it. As you said, starting as a rookie is hard enough but then factor in the proving yourself on top of that can be quite humbling. You get the least wanted loads, the rejects from all the experienced drivers and you quite frankly put up with all the c**p no one else wants for a while. Ok...so big deal right! If you do it with a great attitude things change, and sometimes pretty quickly. In my case I made it my mission to be one of the "go to" drivers for my dispatcher. Following the wisdom freely given on this website I swallowed my pride and just worked at being there for my dispatcher. Whatever, whenever, wherever... all legal of course...but the point is I didn't whine and did it knowing that it wouldn't last forever...it was the much talked about growing pains. In the end I've got a great relationship with my dispathere and he's come to rely on me when he needs things done. The fruits of my labor is paying off too... this last week I'll have run over 4300 miles! Not a bad week for a new guy I'd say. From one older guy to another...thanks Old School. Your guidance here and wisdom has been invaluable to me and others I'm sure. Tony

even if it means you sometimes get stuck doing something you don't want to.

Like that blindside backing off a busy 4 lane road in downtown Chicago IL. it payed off though, my next load was 2100 miles to Stockton CA.