Wow, tomorrow huh? No worries, you got this!

You'll be fine. Just remember that during the air brake test you can stop at any point and start over, if you think you forgot something. Once you say you've completed your pretrip, thats it.

Also, during the road test it's hard to fail by points alone. It's the "impeding traffic" things that'll get ya. Don't stall it when someone's behind you. Don't pull out in front of someone. The rest is gravy. Don't sweat it if you grind a cpl gears or miss a shift. No biggie.

Good luck! I'm excited for you!

Test day!! Ok here we go. Wake up dark and early! Go grab some breakfast before heading into the conference room to sign in for the drivers test. They also went over what would be going on today and what we and our trainers would have to do. I was 8th on the list. Wooo I was excited because I would be able to watch a few others go before me.

The first 3 set up and start doing their thing. One failed on the air break test, one pointed out on the drivers side parallel and the other pointed out on the alley dock... ahhh all 3?? One other student set up. The students that were numbers 4 and 6 on the list weren't there to set up so #7 went to set up and then my trainer said "ok you're up Yhe other guy isn't here yet" panicked a little bit because I thought I was going to get to watch one more round. So we get on the pad and someone walks up to the truck and says "what number are you?" We said 8 then he said "oh we are 6 we just didn't hook to a trailer yet" so we gave them the pad... so I did get to watch one more round. One of the guys I had class with was testing. He pointed out on the parallel. He used up a lot of his points on the offset first though. So I took the pad he was on.

There I am sitting in the truck alone facing the opposite direction of the only girl left still backing so I couldn't see her finish but I heard the whistle that no one wants to hear signaling you're over the points and it's over. So I was like "everyone is failing today" so I'm just alone with my thought for what seemed like hours but I know it wasn't haha. The examiner comes Timmy door and asks me to step out. I do coupling, trailer, lights and in cab. I finish the air brake test and hear "I don't get the pleasure of many perfect scores, but I did just now" wooooo hooooo! On to the backing. Straight line no points, off set no points. Drivers side parallel, I knew I was getting close to the back of the box but I still couldn't see where I was on the line on my side and I knew I had the points to spare so I kept going. I heard the whistle I knew was coming. Pull up just a little bit saw I'm in the box got out just to make sure got back in honked that horn with the biggest smile and sigh of relief. Made it to the road test!!! I'm counting in my head what I think he's writing down for my points but st this points I'm feeling pretty confident and my nerves had settled after how well I did backing. I knew I took a couple turns a little wide and I felt like I was grinding gears which was ok with me because I didn't have a lot of practice with shifting. We got back to the pad. "Does your trainer have an automatic is that why we are in pad truck?" I said yes she does" he says "wow that was impressive you didn't miss one gear" I was shocked when he said that I told him thank you. He said "tell your instructor you did wonderful, you are allowed 30 points, you got 6, thank you, you've been a breath of fresh air" we get out and he said "ok your trainer is coming look at the ground like you're dad "I said it's impossible not to smile right now" he just laughed. We got to my trainer and he said "she's a very good driver" and told her the great news. We high fived like little kids. I just breathed out a huge sigh of relief.

Every time I think about it I just breath out a soft "wooohooo" my trainer just repeats it haha. Feels so good to be able to say I have my CDL , I am a truck driver guys!!! Big thanks to this site for better preparing me before I got out here. Such a huge difference maker! 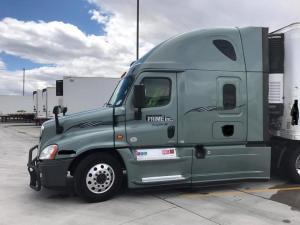 Kori, that is just so freakin awesome! We've watched you progress up to this point, and it's incredibly exciting to see your success!

Thank you!! It's definitely an amazing feeling. I still can't believe I'm CDL holder now! So crazy! Next step my own truck! How is life on the road with your own show?

Kori, that is just so freakin awesome! We've watched you progress up to this point, and it's incredibly exciting to see your success!

Yes!! Sorry ladies and gents! There hasn't been anything exciting to post on here just yet. I've been waiting around to get my sleep study done so I haven't hit the road yet. I got the all clear today, no sleep apnea thank goodness. So hopefully I'm heading out tomorrow. My trainer said if it's ok with me she would rather not take any hometime so I can get into my own truck faster. As much as I miss my family and my dog I agreed I'd much rather be in my own truck when I go see them. Ready to get this show on the road! Oh khbtrainer surprised me with a brand new blueparrot headset today for my trifecta present. Super excited about that! They are expensive so I was going to have to wait a few weeks before I got a set so I am very thankful! But other than that no news to report just yet. Soon though!

Congrats on the trifecta pass :) glad to see your doing well.