Well, now that I'm thinking about it more, I shouldn't have said ditch... Truth is, I probably wouldn't take the ditch either. As much as I want to "save lives," I'm not really into suicide missions either. Most of the time, it's not a ditch though--it's a shoulder or another lane. Really the only point I'm trying to make is that I think it is occasionally acceptable to leave your lane to avoid a collision. I've done it and successfully avoided a collision. The other lane was clear and I felt confident I could safely make the lane change, so I did. If I hadn't felt confident about it, I probably would have just slammed on the brakes and hoped for the best. The other guy was completely in the wrong anyway.

One time I was fully loaded, 79,000+ pounds, pulling a food grade tanker without baffles, and I was in the left lane of a 4 lane divided highway. Heavy traffic both directions, people all around me.

A guy going the other way was making a left turn across our lanes. He started to go, realized he might not make it in time, panicked, and stopped dead across my lane like someone would if they were trying to commit suicide. I was doing about 45 - 50, it was a 55 mph zone, and he was only maybe 150 in front of me when he stopped. There was no dreaming of getting stopped in that amount of time, there was traffic to my right, and I have a sloshing tanker full of liquid without baffles.

Fortunately the median was fairly flat, with a slight lean toward the middle, but mostly just grass and a few telephone poles. I softly veered left just enough to miss him, went through the intersection and into the grass median, then softly brought it back up the slight incline toward the highway, got it back up onto the highway, and kept on goin. Never touched the brakes, never scratched a fender, don't even think I squashed a bug.

About 10 minutes later a cop pulls me over. He says, "We got a call about what happened and I just wanted to talk to you and see if everything's ok. Can we take a walk around the truck to make sure you didn't hit anything?" I said, "Sure, absolutely." So we took a quick walk around and I told him what happened, and it was exactly as it had been described to him.

He said, "You did an amazing job. You saved that guy's life for sure." I just said, "Yeah, I'm glad I was able to find a way around him." I mean, there wasn't really much to say. So he said, "Have a great night" and off I went. We weren't even on the side of the road for 10 minutes. He never looked at my license or logbook or anything. Just wanted to talk for a minute.

That was one of many close calls over the years. I was so close to the guy and it was all so vivid that I can remember he was wearing glasses and a short sleeve shirt, driving a station wagon.

I guess I didn't have time to think about what the insurance company would want me to do. I just thought it would be pretty awful to run the guy over and splatter him all across the highway so I found what I thought was a better idea, and it worked. I never met the guy or anything but I'll bet he saw the world a lot differently after that. That's either a story he never stops telling or a story he'll never tell anyone. But I know he was still around to have the opportunity either way.

A partition or separator within a liquid tank, used to inhibit the flow of fluids within the tank. During acceleration, turning, and braking, a large liquid-filled tank may produce unexpected forces on the vehicle due to the inertia of liquids.
Bud A.'s Comment

My story wasn't pointed at anyone in particular. Different people had different takes on it. I just thought I'd share that story so people know that staying in your lane is not always the only option. I don't want to be a dead hero any more than anyone else does, but if you have reasonable options it's worth considering in my book. 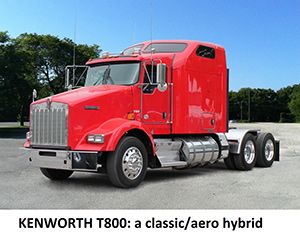 There is a song about a heroic truck driver, Big Joe, who "takes the ditch" (or was it a cliff?) to save a bus load of school children while dying himself.

Yesterday I was bobtailing back from Findlay OH & there was a road closure. I had to detour down a country road (with no lane divider) in the middle of farmland USA.

Out of nowhere 2 dogs come bolting out of a cornfield into the road (I use cornfield generically, no idea what they're growing).

I'm probably doing 45-50mph at the time. There's a motorcycle in the oncoming lane that SWERVES INTO my lane (head-on) to avoid these dogs. I have 2 options. Hit the brakes or take the ditch. I hit the jake, depress the clutch & basically stand on the service brake. The motorcycle comes within arms reach of the tractor before swerving back into his lane.

I'm a dead stop, heart beating out of my chest. I thought I was going to kill him! I hit my hazards, open the door & puke everywhere. The bike... just keeps rolling.

I compose myself & get back into the truck (which is a loaner). The red exclamation point on the Qualcomm is flashing & I have messages asking if I'm okay. The truck recorded a hard brake critical event (obviously).

My usual truck (which is equipped with a drive cam) is in the shop for service. This truck doesn't have one...which is a shame. This was the exact kind of videos they show to new-hires in orientation. I could have been famous! Lol.

Seriously though, everyone is fine & I maintained control of the truck. I have to talk to the safety dept. guy (who is out of the office for the holiday) on Tuesday. This should be a fun conversation.

I'm a little concerned with having to discuss a critical event, but All-in-all...I wouldn't have done anything differently. I saved someone's life yesterday. I'm happy with that.

Stay aware! Anything can happen, anywhere at anytime. 👍

It's obvious where the NEW UNDERWEAR comes into the story. I would slow down through those cornfields. Maybe 35 MPH max.

My story wasn't pointed at anyone in particular. Different people had different takes on it. I just thought I'd share that story so people know that staying in your lane is not always the only option. I don't want to be a dead hero any more than anyone else does, but if you have reasonable options it's worth considering in my book.

Oh no, I wasn't taking it as directed at me. In fact, that was a very interesting story and some great driving on your part. I just thought about it later and realized I was a little strong in my statements.

It's obvious where the NEW UNDERWEAR comes into the story. I would slow down through those cornfields. Maybe 35 MPH max.

Certainly will, especially when I see an oncoming bike.

Awesome story Brett! Thanks for sharing. 👍

Adverse Conditions Truck Driver Safety Truck Driving Stories Trucking Accidents
Click on any of the buttons above to view topics with that tag, or you can view a list of all forum tags here.