Well... I Survived The First Wave 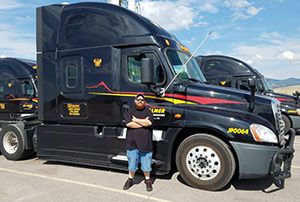 First load being solo, I had 5 stops. I can say I'm exhausted! Today was the big day, 4 deliveries. Made my first one in Seattle on time. Glad it was 2am in the morning since I had to back up on the street. Second place appointment was 4:45am... I get there at 3 am, park on the side and walk to the back door to see a sign that says 5:30 am receiving hours.... so I took a nap. First guy had a half a trailer to be unloaded by him and counted by them so it put me way behind. Was late for Costco dc but they took me anyways. I'm guessing since I was late they took there sweet time unloading me haha but once they did I took off to Tacoma, Supervalu.

Interesting place, parked by the meat dock to be told I need to walk a half mile to the other side where the guard shack is. It was 11 am he said to hurry up they close at noon. Luckily they took me so I made it and delivered everything. Two of them may have been late but at least it wasn't anything I did. May have got lost a couple times! 😂 Especially leaving SuperValu, tons of construction, trying to beat my 14 hour clock to get here in north bend wa, which I made with 10 mins to spare. 😂 Other than this first load. I'm just glad it's over. These multiple stop ones can be tricky and definitelyly was tested. I know things I need to improve on and go from there. Anyways, hope everyone had a great weekend and a safe one at that. Take care all. Hopefully tomorrow load goes just as smooth as these did..... 😑

Man, that's a tough load to start with by God! But you made it unscathed, and now you can tell people you're truly a professional trucker in the big leagues! Congrats and welcome to The Show!

First load being solo, I had 5 stops. I can say I'm exhausted!