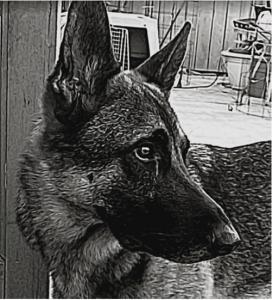 Yes, woe is me. So went for my driving test finally, and the thing I was very worried about, my pre-test and in-cab, I did excellent (examiner said "Best today and you seem to understand what you're doing and why."), so that was nice.

Then the thing I wasn't worried about, backing, was next and it was ugly... I won't tell about the straight back or offset except to say I accumulated about 8 points (no more than 15).

Alley dock was next.

I had enough points left to pass and was in the alley good (didn't hit the sides), focusing on getting the bumper into the box at the end of the alley without going over.

Used all my pull-ups and get outs and bumper was in the box.

I signaled I was done and the examiner opened the passenger side and asked me to get out to see. I asked 'Is that good or bad?' but he just grinned and said, "Come look." (by the way, he was extremely nice and professional, don't interpret anything I say to suggest he was rude or anything, he was very polite).

So I was in the box excellent (yeah!) but he pointed out I was a bit crooked in the alley... and that that was 10 points. (yeah, 10 points...) and you have to be in the box and straight. So that thru me out.

Okay, bad news; I failed the alley but my school allows for 2 tests before asking for more money so I will reschedule in two weeks.

The good news; my school is in Minnesota but they also have a site in Wisconsin, so we do all of our testing in Wisconsin (then I would take my results, when passed, to the DMV in Minnesota and I will be issued a MN CDL).

Why Wisconsin? Minnesota states you have to pass all three at the same time (pre-trip, backing and road) but Wisconsin states that you can do them individually, so I won't have to retake my pre-trip when I retest (yea for me!). Also Minnesota has time limits on each maneuver but not Wisconsin, and Wisconsin allows for more pull-ups without penalty.

On a side note: one thing that is funny about the testing world, is in the real world its GOAL (get out and look) as much as you need, take as many pullups as needed, safety first. In testing you are penalized for GOAL and pullups, basically being penalized for being safe.

So, other than schedule a retest, what am I going to do? I'm going to schedule more backing practice and now with the experience of the test I can practice more intelligently and I'm watching ton's of Youtube videos on backing (already picked up a couple of tips I hadn't thought of).

My school uses barrels instead of cones in the backing range (cones wouldn't survive, lol) but i ordered some 7" cones from Amazon and I'm going to measure the spaces to insure they are correct and (although I'll look like a giant dork), i'm going to put those cones out to replicate the exam area.

Ya'll pray for me.

James, youd be surprised at how many of our members failed their driving test multiple times. It's not a big deal. When you go looking for a truck driving job they never ask, "How many times did you fail your CDL test?" They never ask that question because it's not important or critical to your success.

Hang in there, you'll get it done. The folks who failed their test multiple times get the same opportunities as those who aced it on the first try.

Yep! heres my article about just that