I thought this would be an awesome way to show the constant changes we face on a daily basis and why you need flexibility to handle these situations.

Recently, I picked up a load 4 hours early going from Phoneix to Indiana. I got 170 miles away and received a message: "Please park. Shipper only sent half, receiver needs full shipment. You may need to go back and get reloaded."

Whatever. I would get paid for all the miles, however, if i needed to turn around, i woulndt make it by closing. and thw shipper opened late the next day which meant I wouldnt have enough time to get the load all the way to Indiana on time. In the end I wound up taking a full.10 hour break sitting there, then high tailed my butt to Indiana to make my payroll cutt off. Yay!

Today I arrived at 0600 for an 0800 load that was supposed to be a live load. They told me, "Nope it is a drop and hook and it isnt ready. This won't be loaded until 1600." Because of.my divery appointment time of 0300, I had to choose to take an 8 sleeper or even a full 10 hour break at the shipper. My 14 hour clock played a pivotal role in what time I leave out if the load is done early.

Last month I ran over a boxspring that flew off rhe back of a pickup pulled flatbed trailer. 4 hours of roadside waiting caused my load to be taken from me.

What kinds of things happened to you recently that changed your plans? 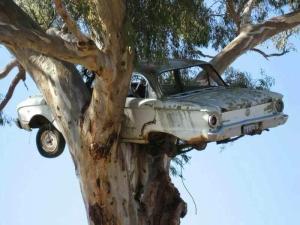 GREETINGS RAINY and OTHER DRIVERS,

In '02, I, for 8 months, drove for a local O/O leased to P.T.L. (Murray, KY) and in the beginning (about 3 months) I Picked Up/Delivered both H.M. and non H.M. After the 3 or so Months, I usually arrived to Shippers to receive TEAM loads (that I learned when sending Loaded calls) with impossible SOLO delivery times, therefore "Pass The Load". P.T.L. then was known as Pay The Lady (as the owner and wife were divorcing), Pass The Load, Park The Load, Pay The Lumper, Pass The Laugh, Pathetic Truck Line and other creative bits.

I usually swapped trailers with O/O Teams or if I hooked a dropped Loaded trailer, there were things wrong and usually had to sit and wait on repairs OR just transport reasonably "safe" (questionable Brakes) Trailers to another Local Location and Drop (for some other unfortunate Driver). - - - - >>Times of Loading and Unloading interfered with REST and SLEEP, like today! DIRECTIONS: >> Qualcomm messages to Drivers that were significantly INCORRECT as to updated ADDRESSES, like Today! >>Pick Up and Destination Points were OLD (as much as 6 months) and either abandoned buildings OR another Company wondering WHY I was there, like Today! >>Directions (usually) from opposite direction of travel so WE Lost and Forlorn Drivers ended up on Snake Trails, Goat Paths, Dead Ends and sometimes, Residential Communities, like Today! >>This was when WE had no "cell phones" or "g.p.s.", when Truckers were defined by their PROFESSIONALISM and ABILITIES as in [B]REAL TRUCKERS!![/B] Few of US remain and we're TIRED OF THE HOSTILITY from many "newbies".

>>I ONCE spent 24 hours at a Shipper in Northern MD and, the next day, P.T.L. Dispatch offered a mere $50.00 which I refused and offered a not so humorous descriptive idea of where to place it. That incident was minor. Ford Motor Company Factory in Missouri was far worse and once on the property, they "held" the trailer hostage, for 2.5 days, then were hostile when I wanted to leave EMPTY, like MANY S & R Companies today!

I've MANY TRUTHFUL STORIES of MANY ADVENTURES in Ground Transportation and shall continue a bit later.

Thanks For Reading1 CHEERS!!

Good topic, Rainy. My experience is very limited compared to most others here, but I really appreciate the VALUE and NEED of flexibility in this profession. I'm sure that if I drove longer, I would have encountered more situations like Rainy describes, but my solo experience was pretty uneventful for the most part. Schneider is a very well oiled machine, in my humble opinion. So for me, it was very routine: Get an assignment, figure out how to get there on time, pickup or deliver, comply with HOS and then move on to the next adventure. Yes, there were a few hiccups, but "flexibility" enables us to take those in stride and not get knocked off balance. Adapting to everyday difficulties becomes so routine that we don't even realize that things didn't go as smoothly as we planned.

One thing that takes a flexible approach for new drivers is living in a truck for weeks at a time. Most of us grew up in a normal American home with normal conveniences like running water, indoor bathroom, fully equipped kitchen, Mom picking up after us, etc. Then we get confined to a sleeper cab and need to adapt to that. It can be a challenge to make the switch, but it's really cool to figure out how to make it work.

Did you know that studies have shown that people who figure out how to adapt to new and changing situations are less likely to develop dementia and Alzheimer's? It's like the brain is a muscle and if we don't use it we lose it. Figuring out how to be a successful truck driver is like mental gymnastics.

Much better than working in a boring office job all day!