Looking To Start A Career! 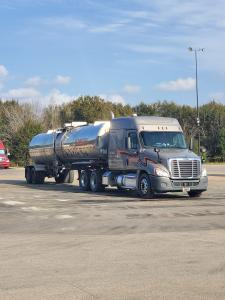 In Florida you don't have to pay to take any of the written tests, if you pass the first time. Only pay for the endorsements and background check and finger prints.

I completely agree it wouldn't be wasteful, I do plan on getting my doubles/triples and hazmat for sure, I'm just strapped for cash and I'm on a time crunch as well. I have to be at orientation in less that a week and from what I understand it could be a very long bus ride so I may end up having to leave this Saturday, I really dont want to bus in, I'd rather fly,but that's an entirely different story haha! I appreciate all the feedback from everyone, more than you can imagine!

It's safe to say I will probably be asking a ton more questions and going through forums in the next few weeks/months once everything starts bombarding me, thanks again everyone! This new driver appreciates it a lot!

If he's light on funds why waste $100+ on something that might not be needed? Just remember it can take 30 days ( mine took less than a week back in August) for TSA approval to come in.

I would say our views express the difference between getting by in the short-term or building a career for the long term.

You're thinking short-term; do the bare minimum to get by. I get that. Sometimes we're seriously strapped for cash or in a time crunch so we have to make sacrifices. Unfortunately, every time you sacrifice the long term to appease the short term, you make things more difficult later on. People who live that way do what I call, "bouncing along the bottom" or "returning to zero" because they get nowhere in life. They're building nothing for the future, they're just surviving for now.

Building a career (or any part of your life) for the long-term means making sacrifices in the short term to make things better down the road. If you live that way consistently things will keep getting better for you. You will build a resume that keeps getting better and finances that keep getting stronger.

He wouldn't be wasting $100. He would be investing in himself by increasing the number of available opportunities in a career where he has the potential to make over $50,000 in his first year and $75,000 by the end of his third year.

Investing in yourself is the best money you can spend. Anything you can do to make yourself better will pay off in some way down the road.

We certainly hope so!

There will be plenty of situations in the coming months that you'll be unsure how to handle. That's true for everyone. Please make it a point to ask us for advice before making any career-changing decisions. It's heartbreaking when someone shows up and says, "Well, I got in a huge fight with my trainer and my dispatcher wouldn't let me get a new trainer so I quit. Now I'm sitting home without a job. What should I do?"

Panic! That's what you should do. You just tossed your career in the trash.

So anytime you're facing a tough situation let us know. We'll be happy to help. That's what we're here for.

The primary person a driver communicates with at his/her company. A dispatcher can play many roles, depending on the company's structure. Dispatchers may assign freight, file requests for home time, relay messages between the driver and management, inform customer service of any delays, change appointment times, and report information to the load planners.
Country boy's Comment

Yes,does have to be paid,but I was just putting my ideal situation out there is all. As for local driving gigs I'd definitely be willing to take one but I'm thinking more so along the lines of a regional job or a local company that would put me on the road for 5 days and me be home for 2. But I realize that would be harder to do at this point,just trying to give as much info as possible man.

I was wondering if you called any of the "Mega-Carriers" that you see regularly in your area? I know most, if not all, of them have dedicated accounts for many of the "big box" stores and factories/distribution centers that could have you out for 5 days out/2 days home, and they pay very well.... I see that you live in Tennessee. Have you looked at A Duie Pyle? I know someone who just transferred to their terminal there. You could start in the warehouse, and have them train you as a yard jockey, then once you get your class A, and an opening occurs, you could work out of the terminal... Just a thought/suggestion...

I would contact all the companies that have the paid CDL programs and see which one fits your needs/wants/desires best. Be open and honest with the recruiting departments at each company. Then go to a local truck stop a few times over the course of a couple of weeks, and talk to the drivers having dinner, if they seem to be willing to talk. Ask them all the questions you want. Most of us will tell you the good, the bad, the ugly, and almost anything else, and I know I was honest about my company.....

The downside to most mega carriers is (if you want to be home 2 days a week during training) is that you will have to be out for 4 to 6 weeks on average to get your minimum miles/hours in before you get upgraded to your own truck. And then you can see about getting onto a local dedicated account that will get you home 2 days a week, hopefully weekends like I had.