Another Pileup - SLOW DOWN!

What is so hard to understand about slowing down in Inclement weather? 50+ vehicle pileup on i80 east side of Des Moines today with several trucks involved. Traffic backed up atleast 7 miles when I came through 2 hours after it happened. Estimated to be closed another 3 while cleaning up the carnage. Thankfully I'm familiar with the area and jumped off where it was backed up, tried to help other guys over the CB to get to i35 so they could get back on I80 but others were telling me I was wrong and to take a different route 15 miles of city streets back to 80, atleast I tried. Spend the money to get a CB and truck friendly GPS unit with traffic updates. Most importantly, SLOW DOWN and INCREASE FOLLOWING DISTANCE in inclement weather! It's not even winter yet and we've already heard of way too many pile ups.

I received a phone call shortly after it happened from our VP making sure I was safe and that I was aware so I could be ready to stop and avoid any secondary accidents.. He was calling everyone that went east today that wasnt back yet. To me, that speaks volumes for who he is as a person and what my company stands for. 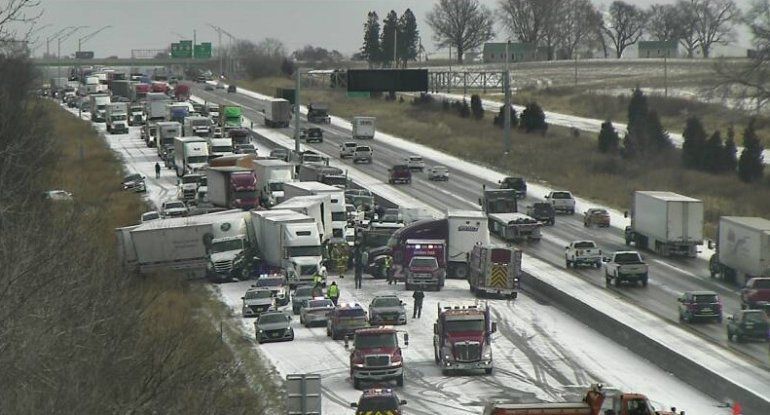 The cars AND trucks drive like idiots around that city. Way too fast for me.

The cars AND trucks drive like idiots around that city. Way too fast for me.

I'm sure you stay on 35/80 and stay outside town when you're going through, but on I-235 that takes you through downtown it's even worse. Speed limit drops to 55 mph for a stretch and I'm probably the only one who abides by it. They turned off speed cameras because people cried they were unconstitutional even though you weren't ticketed unless you were doing 10 mph over. Now they end up having a task force doing speed traps almost monthly. This last one stopped 130 cars in a 3 hour period with the top speed being 90 mph in a 55.

There have been many accidents involving dump trucks in the area lately. The video in the link showed 2 of the same company slamming into the mess going way too fast. I had my DOT physical last Thursday and a dump truck driver was there to be checked and post accident drug screen. I overheard him talking. He didnt see a SUV as he hooked a left and had the SUV slam into his rear tires. He said it hit with such impact it lifted him up and thought he was going to roll, and that he didnt even go check on the other vehicle because he assumed they were dead. Fortunately they were unhurt. I am absolutely amazed at how people around here drive and then complain traffic is so bad. In a metro area of 600,000 people theres no reason traffic on any of our highway systems needs to be so crappy. Seriously, 3 lanes on 35/80 and 4 for a majority of 235.

I get in the second lane and move at the speed limit or under.

Every city I go through, no matter the state, the driving gets worse the closer I get. That's mainly why we prefer the major cities late at night, if possible.

The driving and delivery schedule you deal with at your job....my hat's off to you!

I see this on all the roads I go throughout this beautiful country. But your going to change these trucks minds on how fast they go. They zip by yesterday in a huge downpour and slow down. Saw several cars in a ditch because they wouldn't slow down. They seem to be in a hurry to die or kill someone else. Anyway glad your safe. Keep up the good work.