What Would You Do? (Icy Roads)

Had this experience a couple of years ago in Michigan I believe. The roads were elevated on bridge type platforms. Several lanes either direction. Everyone just kinda started sliding and coming to a halt. I got to the far left lane and put my tires on the rumble strip.

After that I got to watch the oncoming traffic do the same thing except they had a steady stream of people that were in to big of a hurry and had to go. So 1 by 1 you could watch cars get a good slide going and slam into a jersey wall, either the one in the middle or the one on the far side of me. After a good couple of hours a salt shaker showed up and we got moving again.

But I'll never forget people watching others wreck and then deciding they can do better on an ice covered embankment in a turn. 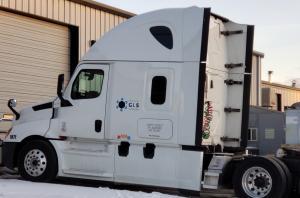 That FedEx driver ended up getting stopped down at the Floristan, CA exit. He had no air to the 2d trailer. I was running cans to TraPac at the Port in Oakland CA and sitting at the 76 in Dutch Flats. I was fortunate to have run out of hours, so didn't have to chain and go. Laura

This doubles driver wasn’t going to sit on the shoulder in icy conditions. I don’t think I would of done this. Nope. 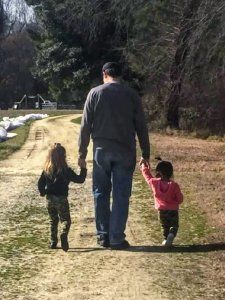 Last night I was on 94 heading from Chicago up to Milwaukee. It was snowing but nothing out of the ordinary. I was moving along at about 35-40mph comfortably. Just 10 miles from my stopping point my windshield wipers started accumulating ice rapidly, and no amount of hot air on the windshield was making a difference. Within a minute my windshield was completely iced over and I had to look out my passenger side window to see how close to the roadside barrier I was while I slowly nudged the truck closer and felt for the edge of the road. I broke all the ice and cleared of my windshield and wipers, then got moving again. Immediately the ice began building up quickly and I had to pull over again within 2 miles as my windshield was again nearly completely blocked. During those last 10 miles I pulled over 4 times to clear ice and just crept along slowly between stoppages in anticipation of losing visitability. I saw many spun out cars on the side of or in the middle of the road I saw during those final miles. No way I was going to risk parking on the shoulder for the storm. Just chugged along at 10-15 mph until I reached a safe place to park. Have been in seemingly worse winter storms and never had ice build up like that.

That's the same stuff I watched near Joliet when I parked early. Got up the first time this morning at 0100 and everything had ice on it.

That's a tough situation, if I saw somewhere safe to chain up I would (a regular interstate shoulder would not be safe enough) so I could limp off at the first exit. Would try to make it to the exit very carefully if I was in that situation. Ice is tricky though, if you go too slow you are going to be stuck in short order.

If you have a cb and see a salt shaker, holler at em and they'll help you get off. Most of them run radios.