Freightliner Cascadia Started Getting Check In When Goes Up The Hill 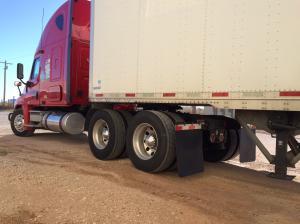 Thank you in advance for any suggestion!

Have the shop pull the codes and they will tell ya. Are you company driver or o/o?

I am an O/O. Thanks a lot for the advice.

Hopefully you have a good warranty.

I did replace fuel filter and air filter recently. So they are not a cause of the problem.

I am an O/O. Thanks a lot for the advice.

Regarding the fuel filter. Double check and make sure the Micron rating on the filter you installed matches Freightliner specs. If the filter is too restrictive, you’ll have issues.

Oh boy, this could be lots of things.

Yuriy, to try to help narrow this down---according to the experience I had, it may be an "electronic" problem. Though that is very vague and I'm no mechanic, with some effort I should be able to find out what the exact cause was in case it's the same as yours, if you remain stuck not knowing and it could help a lot. Here's the clues I base it on that might hopefully help a little (e.g., could it be the same problem and if so it may be a tricky, sort of unique diagnosis that the average truck mechanic wouldn't come up with):

The other day I was just starting out on my 2nd-to-last training drive at school in one of their 9-speed Freightliners (I don't know the model), when something similar sounding happened. We were about a mile into the drive when I hit the gas as usual to get up to 45 but never quite made it. Lost most of the power, so had to pull over and then she stalled. I think it was 3 engine lights that went on. The instructor thought of the same possibilities that you did. He called it in and the mechanic there at the time had little to say from a distance. We soon found out it had already been trouble-shot earlier that day and evidently they were initially wrong about what the problem was, cuz when we took it out it had been put back in the line-up of available trucks. The thing that seemed suspicious to us was that the triangles were lying out of the box on the floor when we got in, which led to learning it had broken down during the school's day class.

However my instructor WAS able to drive it back to base via a longer safer route to break down on, and there was less of a power loss for him, though some, and the engine lights did go on. (Didn't notice for sure if they ever went off like yours did, but I don't think so.) He parked it at the shop bay; then next day I saw it back in the yard and asked about it and was told it had been some sort of electronic problem. Day after that was my exam and I wanted to use it as it had been my favorite training truck, but another instructor said he thought it STILL had a problem. Also it had no trailer then, so of course I used a different truck and that's all I know since I passed the exam and am done at the school.

My other half says it's related to sensor in pdf system. It's probably saying DEF is low when its actually not. Could be sensor for DEF level or a pressure sensor.

He's been driving 25 years, is also a mechanic, and has had a cascadia do that before.