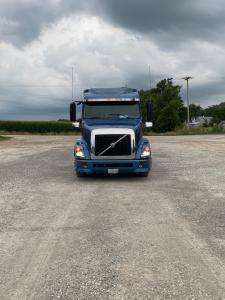 Checked into a decent hotel. Not quite as good as the orientation hotel but passable for one night.

I will meet my TE at the Walmart Distribution Center at 0700 tomorrow. I just hope I can rest enough tonight to be wide awake for the first day. I’m sure there will be a lot going on. I’m staying the week in the truck while the TE will take the hotel room. It’s going to be a balmy 20 degrees in the morning. Five days to go....

It’s been one busy day. Started off meeting the TE and the people at the Walmart DC. Then it was off to find our trailer and start the workflows.

Two stops today, both about 2 hours from the DC. We didn’t really get started until almost 9:30 am. After we made our two stops then we had a back haul from Kellogg’s in Minooka, IL. Made it back to the yard about 8:30 pm. I’m wiped out.

It’s been one busy day. Started off meeting the TE and the people at the Walmart DC. Then it was off to find our trailer and start the workflows.

Two stops today, both about 2 hours from the DC. We didn’t really get started until almost 9:30 am. After we made our two stops then we had a back haul from Kellogg’s in Minooka, IL. Made it back to the yard about 8:30 pm. I’m wiped out.

I’ve been running Walmart Dedicated for 7 years. 12 hour days are the norm.

Good luck...keep up the good work.

Last night’s post was actually day 1. That’s how exhausted I was.

“Easy” day today. Did a drop and hook in Romeoville, IL, taking the empty we picked up at the Walmart in Romeoville to Wisconsin for 48,000 lbs of bottled water. Took almost 3 hours for the live load. Brought the bottled water back to Sterling IL. Today’s mileage for me was 349. Practiced backing fir a bit and called it a day. Tomorrow will likely be the same - drop and hook from the burbs to Wisconsin for water.

I got my winter driving in today! Started out as a cold rain at 0700 which turned into a wind and snow storm by afternoon. Today’s drops were in Huntley and Crystal Lake IL. Then we did another Wisconsin water run. Except it took longer to get back to base. It was a 4 hour drive vs a two hour drive. The wind and snow got pretty fierce by 4pm. I averaged just over 30 mph on the trip back. Near whiteout conditions in some areas. We stopped near a toll on 88 to break the ice off of the windshield wipers. The lock froze on the trailer even with a tennis ball covering the lock. Had to ask the service department for a small propane torch. We start all over at 0700 tomorrow and... yes... another Wisconsin water run.

Anyone who says truck drivers have it easy are seriously mistaken.

Started out pretty good. Easy drop & hook at the second stop, a Walmart in Romeoville. Other than a few traffic delays it was pretty smooth. Picked up a load of Ocean Spray in Plainfield Wisconsin and started back to Sterling, a 144 mile trip. It would only be 120 miles if you followed Jill's (Schneider's Navigation on their tablet) directions. We stayed on 94, 294, and 88. Jill would make us take small country highways and secondary roads. Since Walmart pays the tolls, we stayed on the expressways. A little longer much easier drive. Jill won't give you toll roads. I'm putting Karen (my Garmin Dezl 580) in my truck since she lets me take tollways if I want. Got back to base by 7:30 pm. Easy day.

The Navy Seals say "the only easy day was yesterday." True for this day.

After a late start (my TE liked to chat with everyone over an hour or so each morning before we pre-tripped) we left for a one store drop and hook and back to Niagara Water. An easy day for my graduation. Wrong! So - so -so wrong.

Our drop and hook failed big time. The trailer we were going to grab at the Walmart in Lake Geneva Wisconsin had no trailer registration. Someone had broken the lock on the registration/paper box and took the papers. So there we sat, waiting for Walmart to unload a very full trailer so we could use it to pick up water in Plainfield. It had to be alive load, due to the weather. We were only 45 minutes behind so no big deal. Wrong! So - so -so wrong.

When the trailer was being unloaded someone broke a row of juice bottles on the bottom of a pallet. The whole trailer floor was wet. If you know the Niagara Company, they won't load a trailer with a wet or broken floor. The robot loader they use weighs 10 tons, and carries 2 tons of water bottles. So... off down the road we went to find a trailer. Finally found one about 30 minutes away. Cool. Nope. The brakes were frozen. After freeing the brakes we went back to Niagara and waited for a live load. Then the snow and icy rain started. Left Niagara at 5 pm and made it back to Sterling at 9:50 pm. Spent a while going thru my progress reports and signed my name that I agree with my TE's evaluation. Instead of being back at base at 5 pm we were 4.5 hours late.

That's the end of TE week. I was allowed to move on into my own truck and get a mentor to help me when I need it over the first month.

Next thread will be "First solo adventures of a Schneider Dedicated Walmart driver."

Peace to all and happy Super Bowl Day!

Great job surviving, Dean! Now you're education will actually begin as a soloist. It's all on you.

Great job surviving, Dean! Now you're education will actually begin as a soloist. It's all on you.

Great job Dean! I know exactly what you went through. If you learn your craft and your territory, you earn very good and consistent money.

Thank you PackRat and G-Town! It was an experience for sure. I compiled a list of take-aways from the experience.

1. Pay attention to what the TE teaches you.

2. The dedicated business has dedicated paperwork. It's a little overwhelming at first, but you will get the hang of it.

4. Don't hurry. There's no reason to hurry. Follow the Schneider way of pre-trip, TIV, post-trip, couple/uncouple, etc. Don't take chances because you want to feel that you are the fastest.

7. People are watching how you react to difficulty. Do you compose yourself and retry, or do you throw your hands up and say "frick it?"

8. Be on time. Fifteen minutes prior to your appointment is just in the nick of time. Give yourself some space.