Page 1 of 2 Next Page Go To Page:
Chelsea H.'s Comment

Greetings Ladies and Gents, I need help/advice for my hubby who's been in training and away from home since March 9th with no concrete end date in sight. He was told this company training would last from 4-6 weeks tops (1 week of orientation, 14? days training, and 10 days team.) His drug test was sent to the wrong corporate office (delayed for 5 days), he was assigned to the wrong trainer (delayed another 3 days), and then mechanical issues abounded (multiple delays.) All totaled, he has been delayed around 3 weeks and counting. This last clutch replacement has him tied up (and not driving) until Tuesday or Wednesday with still another 6 days of team driving left to go--provided nothing else breaks. He then still has to be assigned his own truck and given a route that will bring him back home (another week perhaps?), leaving him what looks to be another 3 weeks out! He's fed up to be out so long with no home break. His son has told him he doesn't believe he's coming home and thinks the foreign exchange student is his new daddy…

I think no one at corporate has paid any attention to this issue because it hasn't been brought to the right person, so I'm asking you all: 1) To whom should he speak about this issue? 2) Should he ask to get sent home now, or tough it out and request all of his break time in a lump and start fresh in solo mode with his own rig? 3) Can he demand this time be given to him? Or should they offer additional pay since by time (hours) he should be making full pay (not team) rate? 4) Are all trucking companies this blind regarding their drivers?

Welcome to Trucking Truth. Some experienced drivers will chime in shortly, I'm sure. I'll say this from what I've been told by experienced drivers. What you're describing is what can happen with trucking. And everybody on this forum will just be going from what you're telling us. Not saying you'd deliberately try to be deceptive, but sometimes when we're upset, our perspective is skewed, whether we realize it or not. Being upset can trigger rash behavior. A skewed or emotional perspective can then be communicated unwittingly to anybody listening. Anybody listening with any amount of listening experience will know in the back of their head that they're just getting one side of the story. Having said all that...

Breakdowns happen, this causes delays. Corporate mistakes (like the drug test example you mentioned) happen in any industry. Being assigned the wrong trainer, although I'm not sure what you mean by the 'wrong' trainer, is something similar to what I've heard happening at other companies. I've heard stories of trainers being delayed. Trainers being swapped out in the middle of training. All of this spells delay. It happens. This doesn't mean USA truck is a bad company. You're husband has just gone through a lot of bad circumstances.

First thing's first. He'll have to tough it out - to use your words. He's put this much time into it, no sense in rocking the boat and causing problems for himself by getting on somebody's bad side. He shouldn't DEMAND anything. He's the rookie - he needs to prove himself just as much by his attitude as his driving. While nobody should be a doormat, he's in a position where he'll be better off if he just remains patient and sticks through it. This situation is temporary. The best thing you could do is support him and encourage him. Knowing that you're being patient and supportive will make it easier for him - he's the one away from home!

I'm not condoning corporate mistakes. Breakdowns ruin everybody's day - including the trainer. Just hang in there, and don't rock the boat. You'll both be less stressed if you take the high road and count it as a sacrifice. Remember, it's only temporary!

I agree with Bill. I had a bit of a delay myself that resulted in an extra three weeks in limbo and at my own expense. I am single, with grown children and grand children (and would never be mistaken for a foreign exchange student - maybe an alien) so my circumstances are not nearly the same. HOWEVER, patience is the key word here. Communicate your concern over the mistaken circumstance but DO NOT take the attitude that you are demanding anything. These are people your husband is working with and for and are just as sympathetic as anyone else, even if they work for a corporation. You've heard the cliche but it is true: you get better results with honey than vinegar . . . be patient and chalk it up to training - your husband's as a driver and you & your family's as the support system he is going to need to make this whole thing work. Besides, the home coming will be a bit sweater that way, eh?

Bill W., I don't believe I stated anything that could be remotely construed as deceptive. He is upset, slightly emotional at this point, and may react rashly under the circumstances, which is why I put his questions up for experienced truckers to comment on (if only to calm him.) I'll pass along your response... I already understand that delays do happen, but when they occur through no fault of anyone's, there needs to be a policy in place to guide what should be happening and when it should occur. I haven't heard of anyone going through 80+ days of training away from home with no break. Rookie or not, no one deserves to be treated in an unfair manner, and a boat needs to be rocked.

That being said, it is my belief that no one in a position to help with this situation has been notified. They can't very well rectify any issue that has not been brought before them. Which is why I asked to whom he should speak and what he should do. His attitude has been proven by his willingness to do the job and be away from home for this long with no end in sight due to mechanical issues, not his skills as a driver. My questions are still posited on his behalf.

That being said, it is my belief that no one in a position to help with this situation has been notified. They can't very well rectify any issue that has not been brought before them.

Chelsea, (my daughter's name is Chelsea as well) . . . I believe the chain of command begins with the dispatcher - hopefully his usual one and not a "weekend" replacement. Communicate any concerns (especially training concerns) with the dispatcher first. It is considered "normal" to ask to speak to the next "boss" a level above (or more than one level above) if necessary and should not engender any "hard feelings" as it is sometimes necessary to find the person with the right authority to get problems resolved. I don't mean to sound condescending in any way, but I just want to remind you and your husband that courtesy and professionalism goes miles towards resolving conflict so don't let your frustration color your words or attitudes. Your husband is the "injured" party in these circumstances and his/your humility in this situation will go miles towards getting someone to try and resolve this for you. Best of luck and I hope this is an anomaly for your husband and not the start of a tend.

The primary person a driver communicates with at his/her company. A dispatcher can play many roles, depending on the company's structure. Dispatchers may assign freight, file requests for home time, relay messages between the driver and management, inform customer service of any delays, change appointment times, and report information to the load planners.
Chelsea H.'s Comment

Jopa, thank you for your prompt reply. Luckily I will not have to be the one to speak with any of the "powers that be." I'll let him know to slather on the honey and tough it out.

Chelsea - I did not imply that you were being deceptive. Perhaps a poor choice of words on my behalf. I didn't mean to offend you. I assumed your husband was upset, and therefore that you are upset. Rightly so. Still, the best thing to do is be overwhelmingly patient and just stick it out.

…. Besides, the homecoming will be a bit sweater that way, eh?

Are you saying that she'll give him the cold shoulder, or did you mean to say "SWEETER"?

I can sympathize. Check the link to what I went through. These guys are all right on the money with their advice. Tell him to take a deep breath and just go with the flow, it will all be a distant memory in a month . I am starting my 4th week solo and I have loved every minute of it. The delays sucked but now its just a funny story to tell. In the big scheme of things, whats another 3 weeks matter at the start of a long driving career. Best of luck to both of you, keep your head up 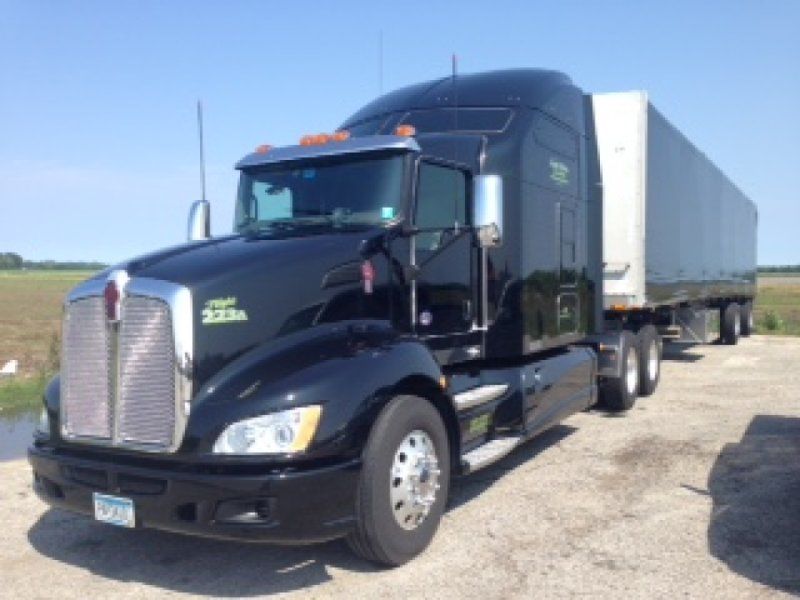 When I went through training, before we left the terminal , we had the cell phone number of the head trainer to call with any problems. Along with communicating with the driver manager/dispatcher, I would also contact the training department.