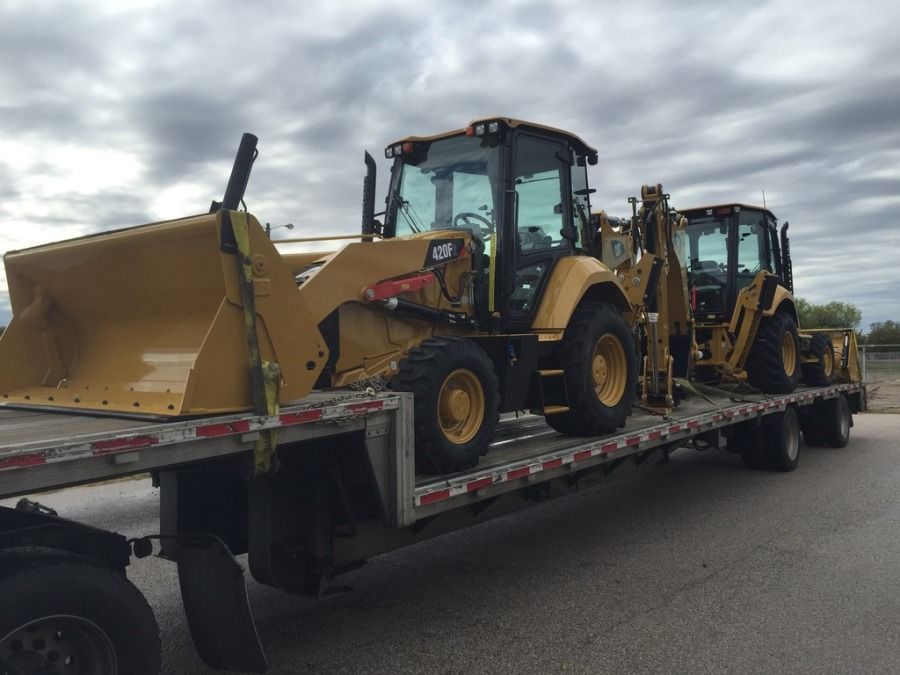 These were pretty small by comparison to the ones we hauled earlier this year. Only 65' long and 55k. Just had to use the stretch trailers for these ones. I did not get a photo of it on the truck but I did get a photo while I was waiting for the crane to pick mine. 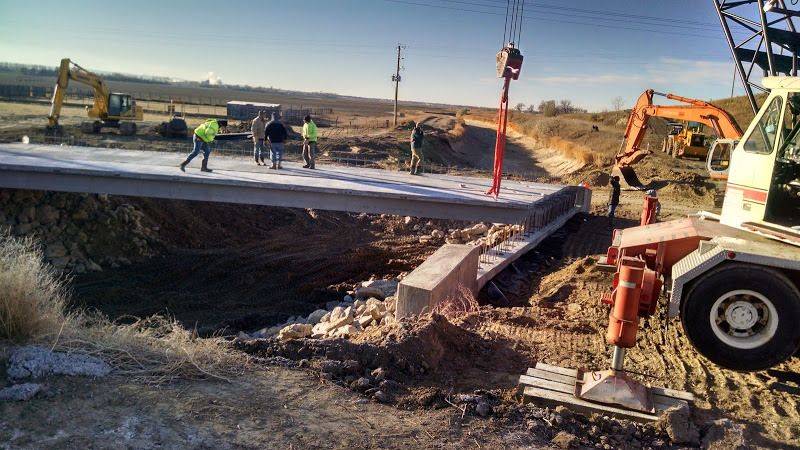 They are not even hanging over the side of the trailer. What gives?

They are not even hanging over the side of the trailer. What gives?

I only haul the little kittens. They're so cute and fluffy!

Made my usual stop in Cressona, Pennsylvania today for a back haul load going south. I picked up these 53 foot long joints of aluminum extruded material. They are going to a Great Dane trailer manufacturing plant in Statesboro, Georgia. They will be incorporated into the decking of some nice new shiny trailers. This load weighs in right at 40,000 pounds, so it is not extremely heavy. 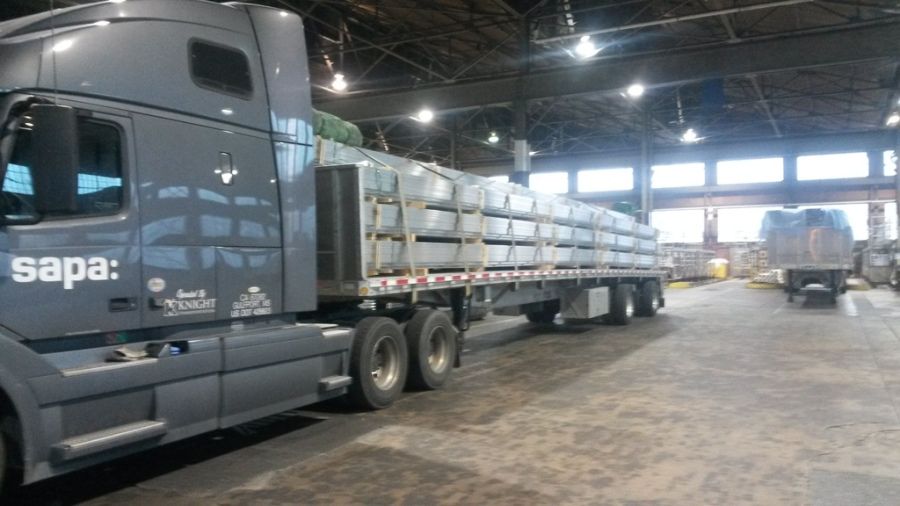 All these loads have to be protected from the weather, so here is what she looked like after I had her all dressed up and ready to go out for the night! 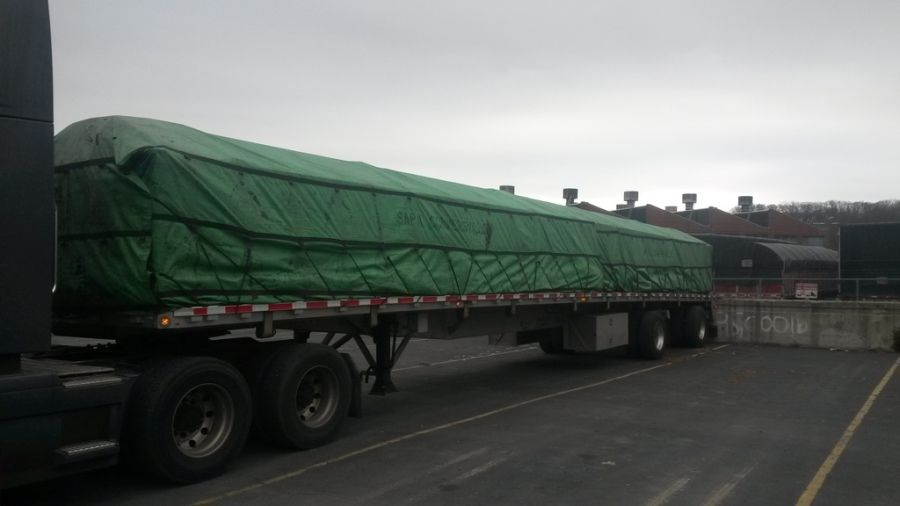 This has to be my smallest load EVER! We took two side dump trailers over to Spokane last Friday..... Well apparently they forgot to put the tarps back on the trailers so I had to take them over there. Maybe 500 pounds total and NO I am not going to tarp tarps. 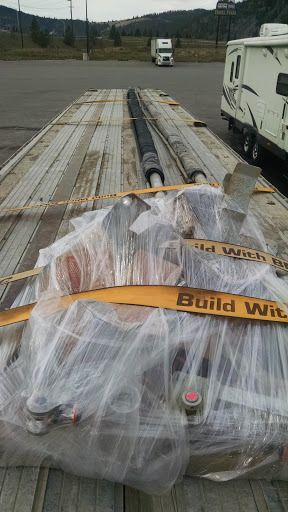 Ok, my turn again. Sorry I haven't posted pics in a while! These are some of my more unique loads from the last couple months or so:

Some roofing tiles for a residential construction site: 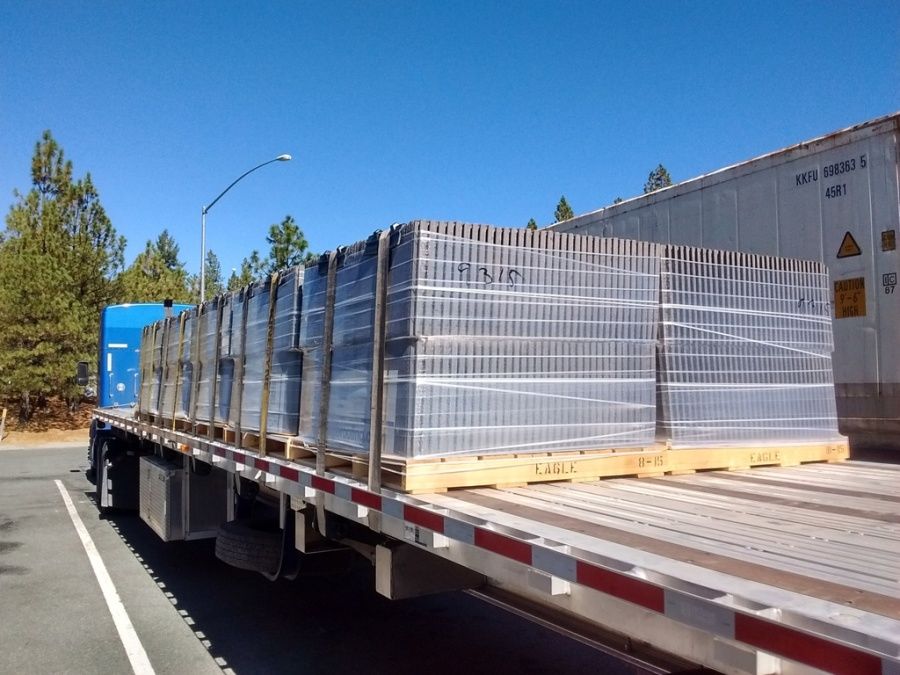 Some sort of siding material, don't remember where they went: 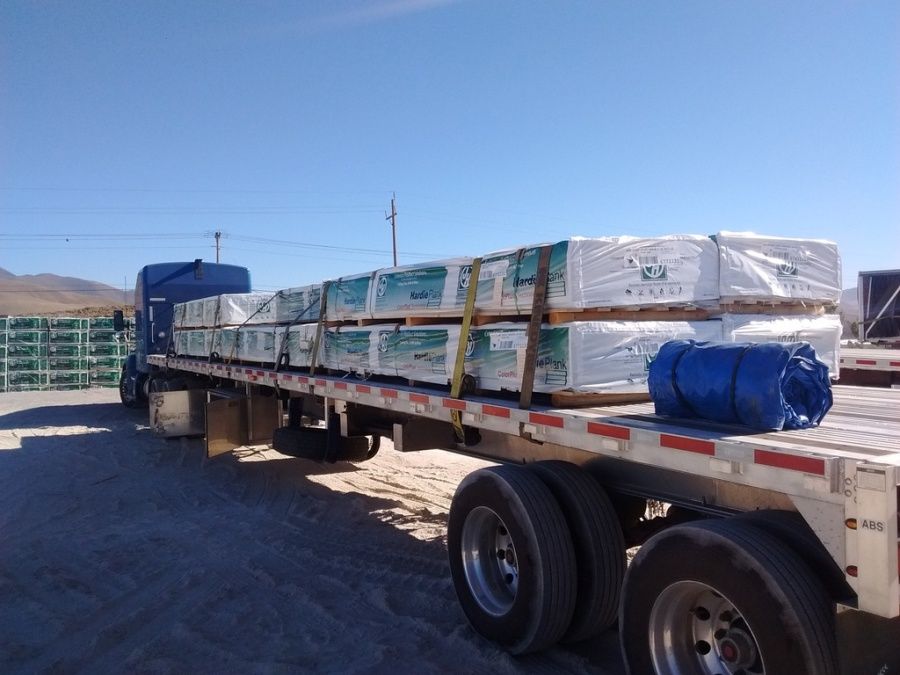 Lumber that was destined to become pallets: 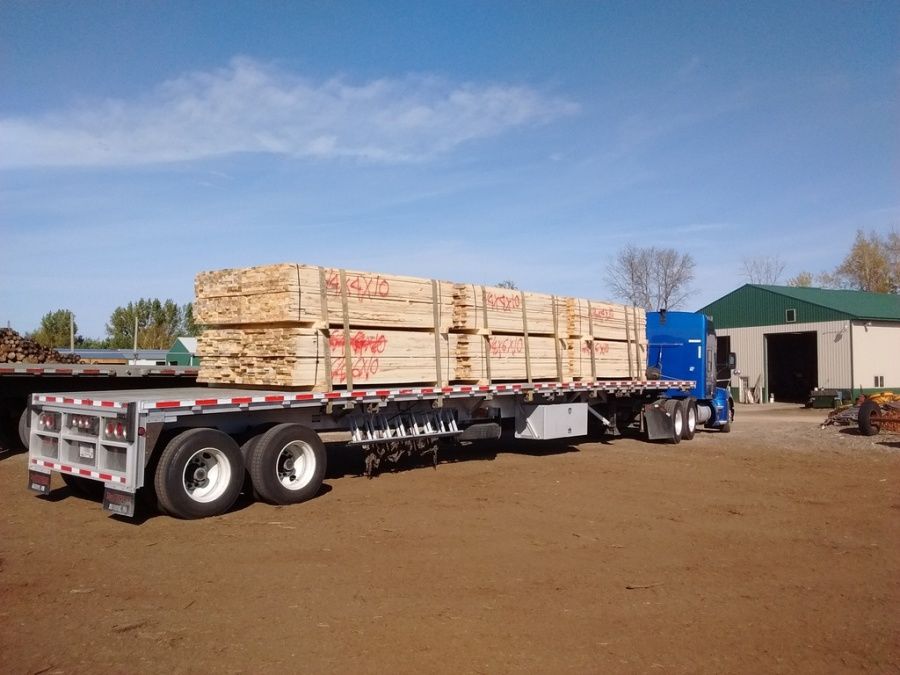 Loading some roofing/siding panels in crates, going to a new hospital. This was a super light load since the panels were L-shaped, which meant the crates were filled mostly with air. The trade-off was that it was probably my highest load so far (I was pushing 13'6" with these): 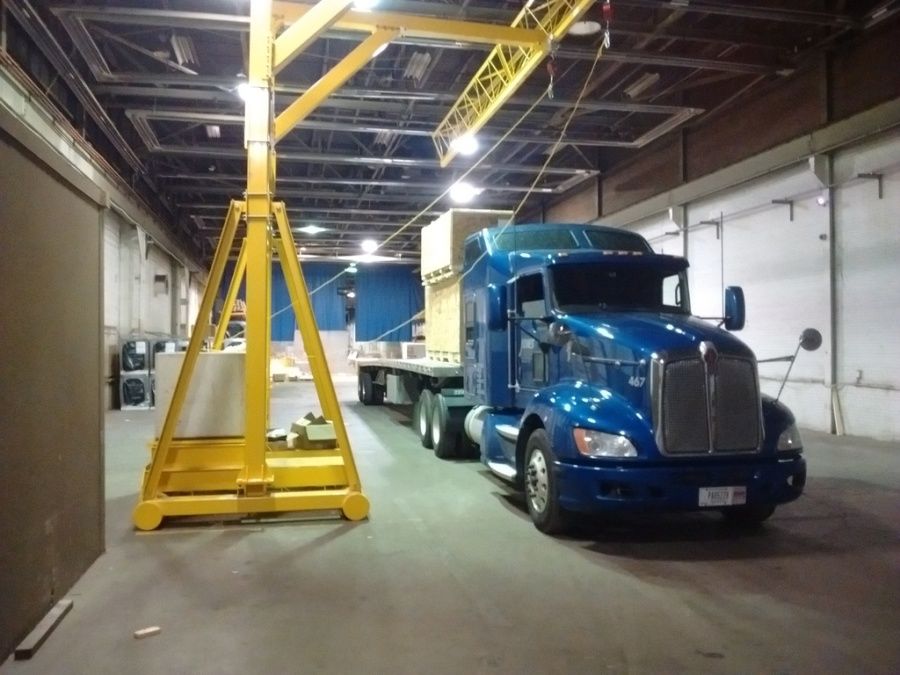 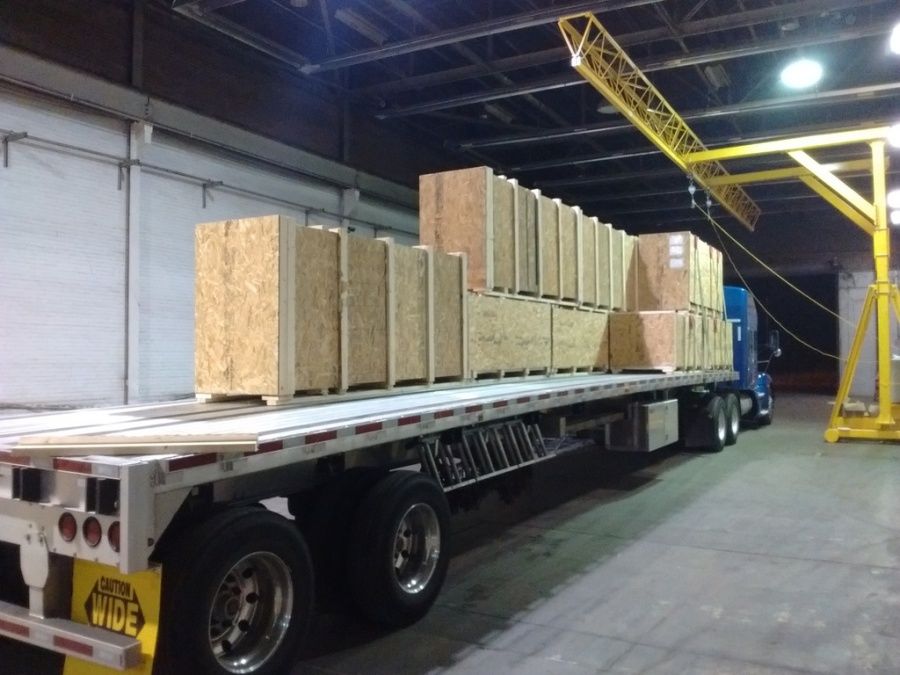 Some kitchen tiles, sinks, fixtures, etc. going to a small building supply store. Pic 1 is before untarping, pic 2 is after. I had to use the little grey tarp to cover the front bottom edge because the flap didn't reach all the way down: 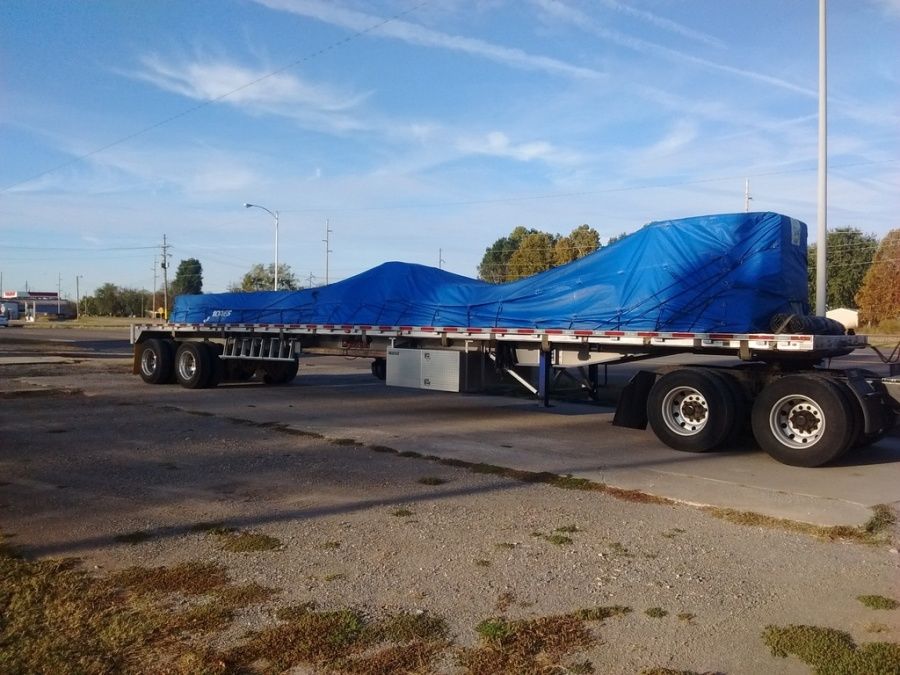 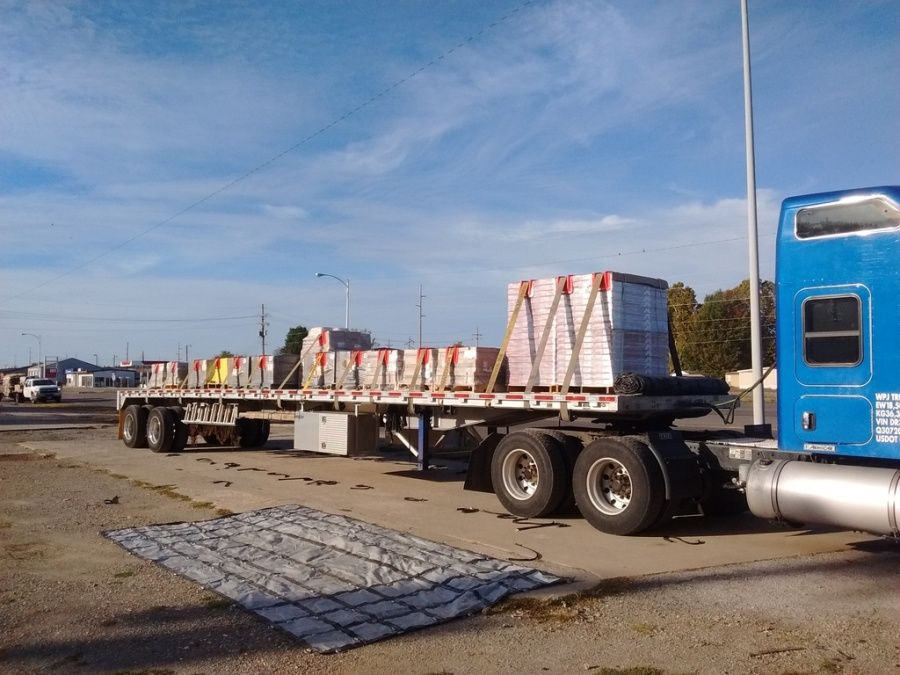 Some rolls of roofing material. Notice the v-boards. I didn't have any, so they charged the broker $20 and "allowed" me to build my own at their v-board station. This was probably the easiest load I ever tarped; low & easy to work on/around, the perfect height for my bungee D-rings, perfectly uniform, etc. 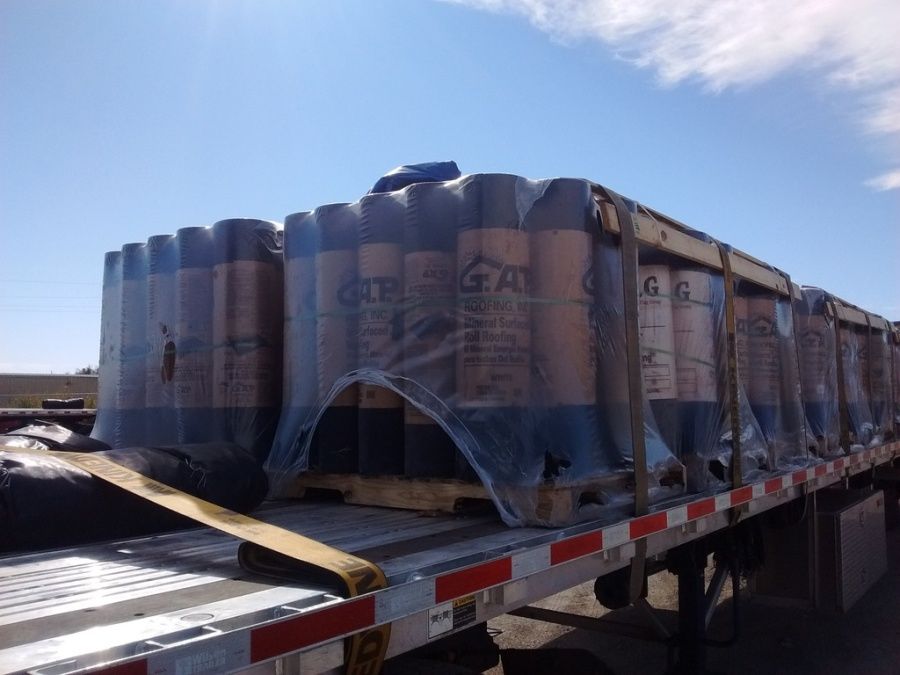 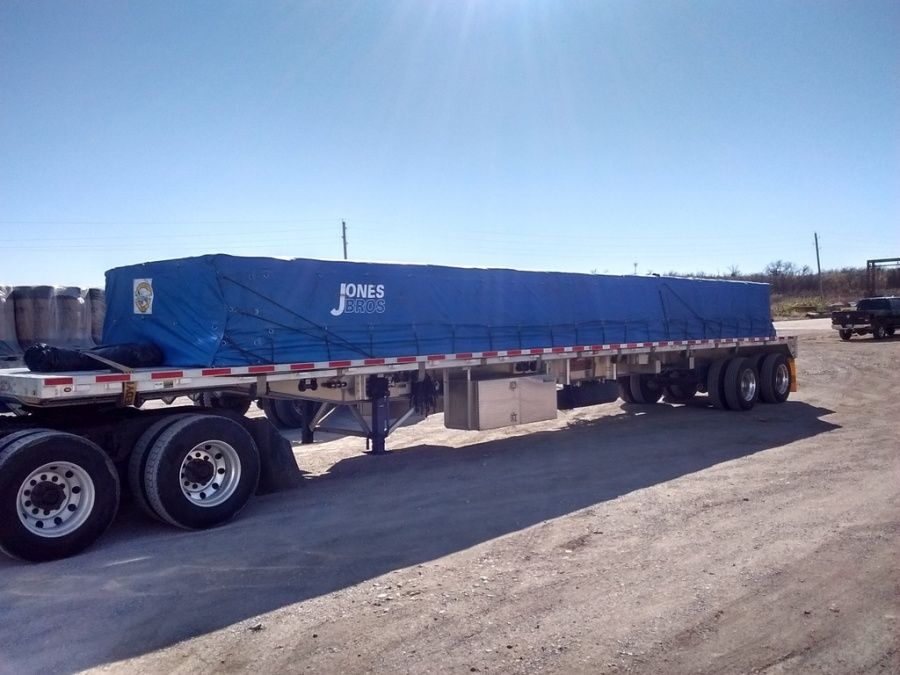 I delivered some rebar to a jobsite in Minnesota where they're building some huge concrete bridge pieces, then shipping them up the river to the job site. Anyway, they had some rebar that was either extra or the wrong size, so they reloaded me with it right there and sent me back where I came from. That was the worst load, so irregular and difficult to secure since they just plopped these random, loose bundles of rebar on the deck: 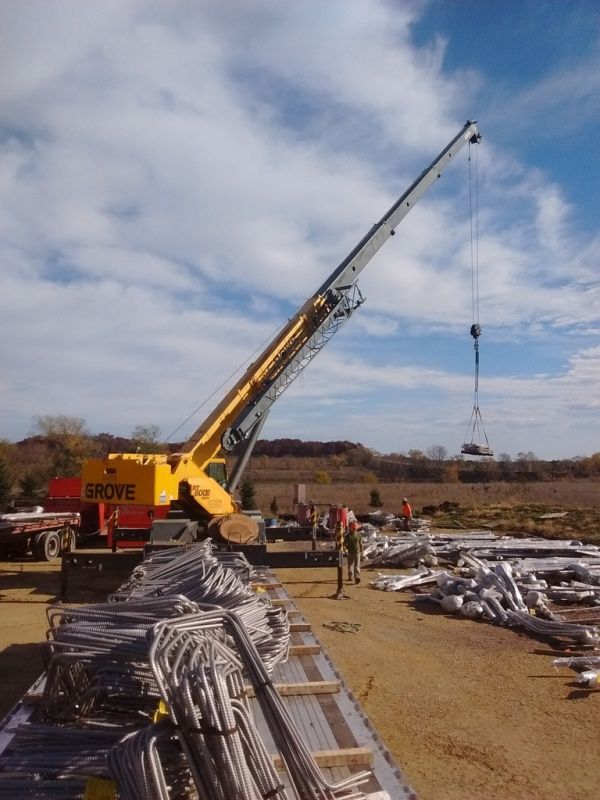 Loading aluminum extrusions in a really cool old brick building in Ohio. The customer is super picky about any moisture getting on them, so we have to cover the deck in plastic, wrap it up the sides, then cover the top with another sheet of plastic before tarping. See all the straps? There's really no way to belly-wrap this load since each row has multiple units of varying height (even if I could run a strap through the middle, it would push down on some pieces and push up on others), so I just secured it with everything I've got: 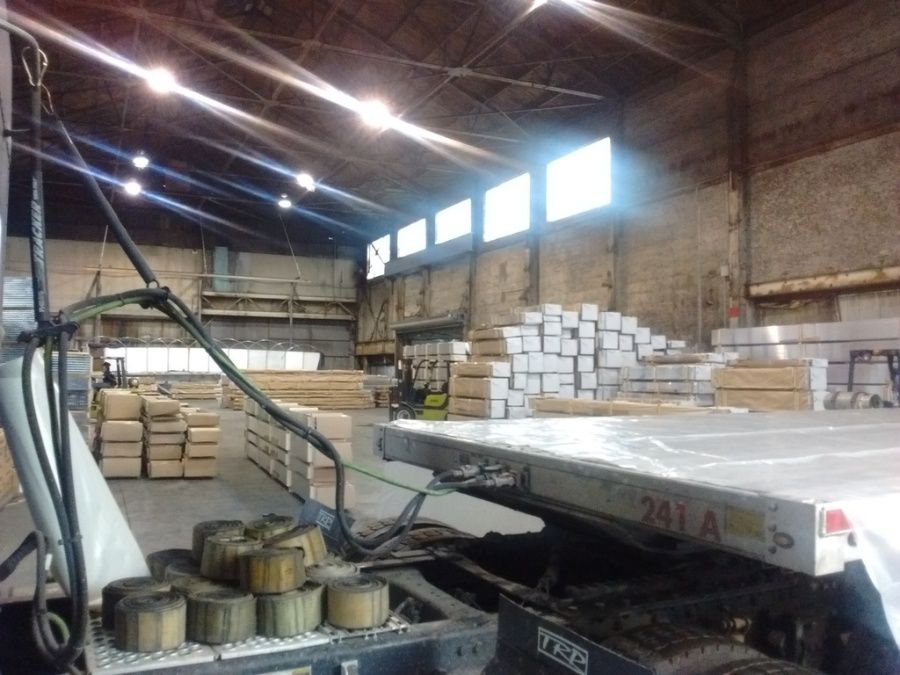 Some nice pieces of hardwood (walnut and oak). They let me tarp in one of their sheds since it was raining:

In line to load sheetrock. This place was weird, they had you stage your straps, tarps, edge protectors and bungees on the deck before going in, then they had you stay in the truck while a team of workers loaded, secured, and started the tarping for you. All you had to do after pulling out of the building was bungee up the sides of the tarp. Kind of nice, but in a way not so much because I'm very particular about how I want my loads tarped. The second pic is my first time unloading in the snow, in below-freeing temps and biting winds. That was fun. Definitely no "epic Old School experience" though. Welcome to winter I guess! 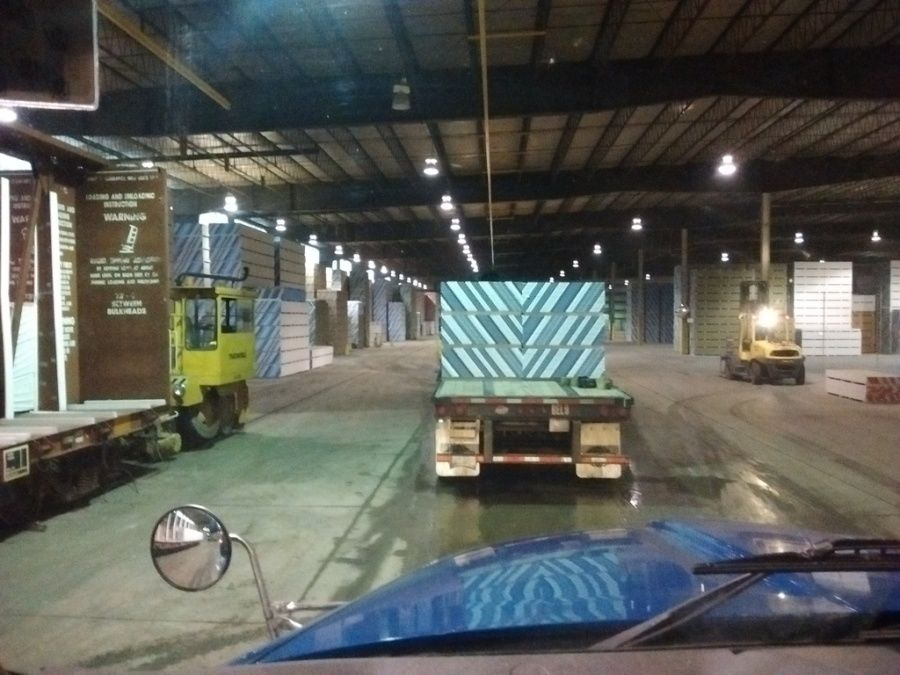 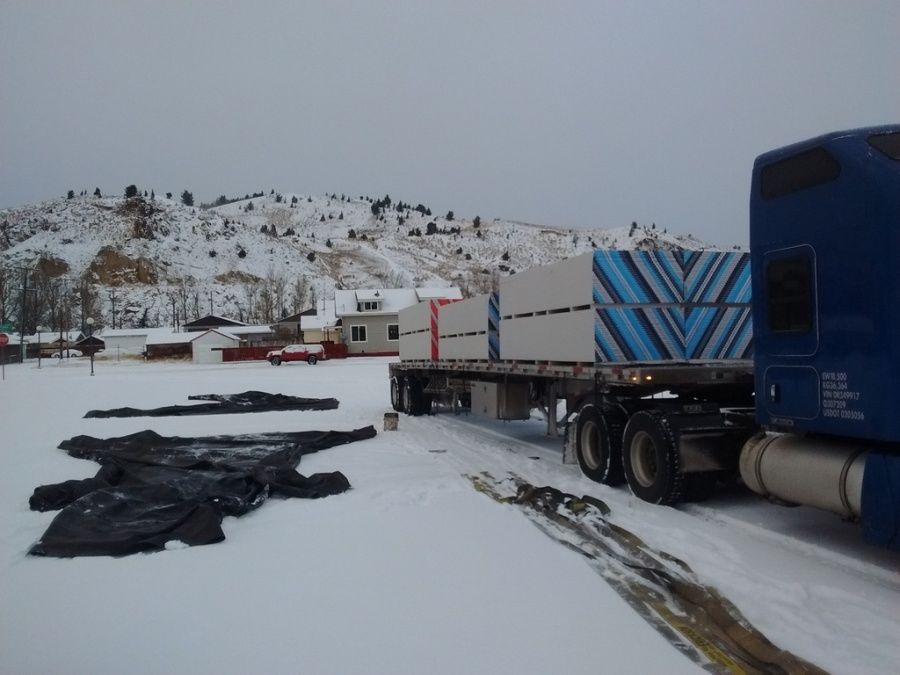 Thanks for sharIng, Old School and Persian Conversion! (And Pat too! And everyone else!)

Today I had my toughest load ever. It took a long time to load because the guys doing the loading are welders, not forklift drivers. They're taking apart a plant that made plastic bags and shipping the equipment to other plants for the same company. This load is going to Idaho but I'm only going as far as Denver then handing it off to someone else while I enjoy some much-needed home time for a week.

In fact, let me apologize for being a little crazy and cranky lately. I've been out too long, which makes my usual crazy, cranky self even more so.

Anyway, here's the load. It was a real challenge to secure because there were only a few places where I could get chains or straps across the bases and there was barely enough room to get binders on the chains. I wanted to put the binders in the middle where there was room on the chains, but everything was already shrink wrapped and there wasn't much room to maneuver inside the machines anyway. 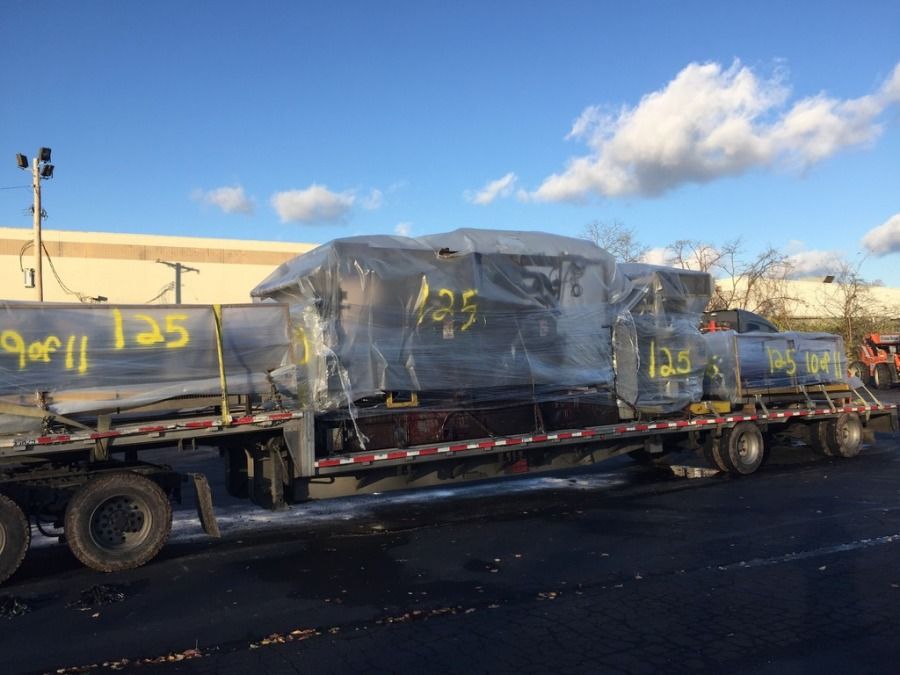 And a mere 10 hours after arriving, everything was loaded, tied down and tarped! 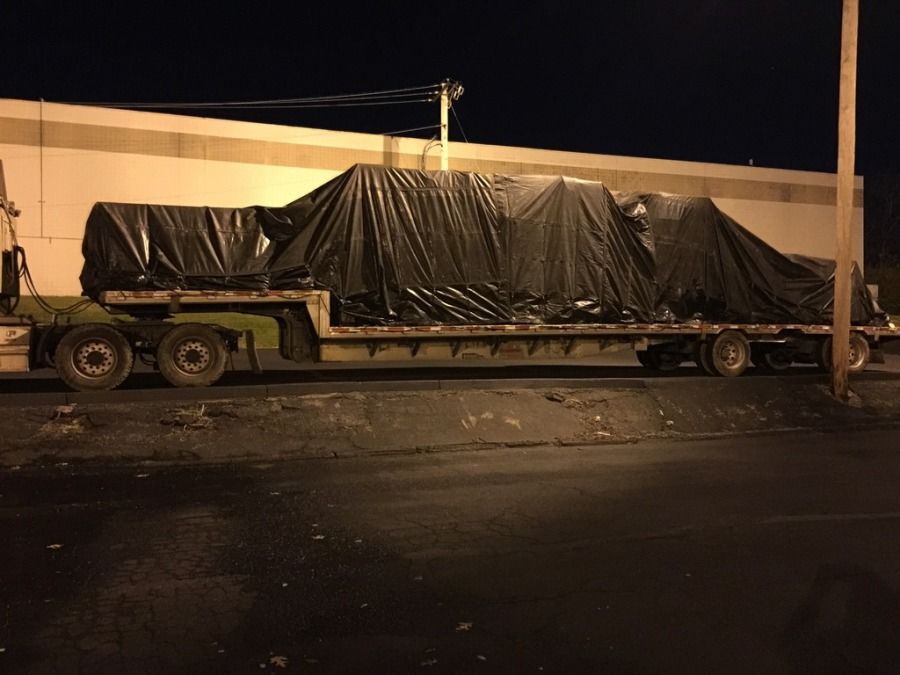 I'm really thankful I will be getting home. It made this load bearable.

All I got to say is WOW! This flat-bedding is serious work, I would be shytting my pants always being worried if I secured the load correctly.