Page 1 of 3 Next Page Go To Page:
6 string rhythm's Comment

I posted a thread the other day about the 11% grade I had to descend. I've been relying on my engine brake for all mountains so far. I even leave it on while driving on the highway so I don't have to use my service brakes - it's a convenience.

I'd like some experienced drivers to chime in on descending a mountain w/o using the engine brake. Since winter is here, and engine brakes shouldn't be used on slick roads, I need to start learning to be comfortable descending with just the natural retarding of a low gear and use of the service brakes as needed. I understand the concept of choosing a low gear and having the rpms close to governed speed of the truck, and the 5-3 technique of braking, just wanted to hear some input from all the experienced drivers. It's time for me to just start acting like I don't have an engine brake so I get some practice.

For those not familiar w/ the 5-3 technique, it's also called snubbing the brakes. You determine your controlled speed, and try to stay under that number. When you reach that number, e.g. 30 mph, you apply the service brakes for only 3 seconds at a time (continuous pressure) until you reach 5 mph below your controlled speed - in this example, 25 mph if the controlled speed is 30 mph. Rinse and repeat. This is the technique my school taught me, before they even covered the subject of using a retarder or engine brake.

When coming down a mountain in winter, especially if the road is covered in snow and ice, what I do is pretty simple. Since the roads are crappy I'm already going slow anyway, and as I'm approaching the downhill run I'll coast a bit to slow down even further and drop down another gear. On bad roads I'll usually descend the hill between 13 and 17 mph. When braking, I don't "stab" the brakes, because I'm looking to avoid any kind of sudden changes in momentum that could cause me to lose traction. What I do is gently apply only the side of my foot--not my whole foot, just the upper corner where my pinky toe is--to the brake pedal. It only takes a couple of seconds to get my speed back down, and then I let the truck roll again until it's time to bring it back down again. By doing that I was able to come down Homestake Pass in Bozeman, MT when the roads were a solid 2 inch thick sheet of ice from Miles City to Missoula without so much as a single butthole pucker. Well, except when some super trucker went flying past me at 50, but that's a different story.

Thanks for the reply Fatsquatch. I totally hear you on the stab braking. Some drivers get stab braking confused w/ snub braking - not saying you're doing that.

For the sake of some other folks that might be reading I'll quickly distinguish between stab and snub braking. I was confused on this when I was a student.

Stab braking is a technique of braking for emergency situations where you brake hard until your wheels lock up, release, and hit them again until you can stop or slow down to a safer speed. Again, for emergency use only.

Snub braking is consistently applying pressure for a brief amount of time - usually 3 second intervals - in order to slow down your truck safely without burning up your brakes.

Back to what you posted, I appreciate your info. Do you look for a certain rpm along w/ whatever speed you're trying to maintain? I"m sure this will vary from truck to truck, i.e. the high rpm range where the engine naturally resists speeding up in a low gear.

Hey Bill, to me this is the most important thing Fatsquatch said:

Since the roads are crappy I'm already going slow anyway, and as I'm approaching the downhill run I'll coast a bit to slow down even further and drop down another gear. On bad roads I'll usually descend the hill between 13 and 17 mph.

I did like his little technique of using the "pinky" toe side of his foot. As I was reading it I realized I do the same thing sort of instinctively. I never really consciously thought about it, but that's how I maintain a slight pressure on my brakes in bad weather descents while being sensitive to the responses of the vehicle.

The main thing is slow and steady without sudden changes in momentum or deceleration.

Old School and Fatsquatch, do you guys look to maintain a high rpm while descending? 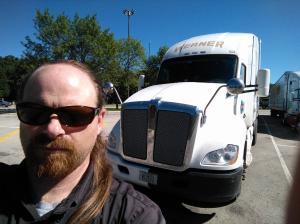 What you're saying makes sense in regard to having the rpm range available to pull if you need to, but I'm not so much talking about getting out of a slide or potential jacknife, as much as I'm trying to get input on the actual technique of descending a grade w/o using an engine brake.

Generally speaking, you use the same gear-to-speed ratio on bad roads you'd use on clean roads. So, for instance, if on dry pavement you'd use 6th gear to stay in a 13-17 mph range, you'd use 6th gear to stay in the same speed range on wet, snowy, or icy pavement. The primary difference is in braking technique, and being mindful that you're not going to have the engine brake assisting you.

Generally speaking, you use the same gear-to-speed ratio on bad roads you'd use on clean roads. So, for instance, if on dry pavement you'd use 6th gear to stay in a 13-17 mph range, you'd use 6th gear to stay in the same speed range on wet, snowy, or icy pavement. The primary difference is in braking technique, and being mindful that you're not going to have the engine brake assisting you.

On my other post where I talked about that 11% grade, I stayed in 6th gear w/ the engine brake on high. I actually had to use the accelerator a few times to get up to speed since I was slowing down too much. The posted truck speed limit was 20 mph. I was hovering between 17-20 mph. I never had to use my service brakes.

All things considered, if that situation would've been in bad roads w/ everything else the same (my gross weight), and if I wanted to NOT use the engine brake, you're saying that I would've kept everything identical but should have just used the snub braking technique instead of the engine brake ... right?

I'm trying to remember, I think when I was fluctuating between 17-20 mph in 6th, I was around 1200-1300 rpm. I was in a Freightliner Cascadia, Detroit engine (don't know the model), 10 speed transmission.

I disagree, you want low rpm going uphill. There's a much greater chance of sliding and/or losing control climbing a mountain with high rpm.

Safe Driving Tips Tips For Braking
Click on any of the buttons above to view topics with that tag, or you can view a list of all forum tags here.