Gave My Trainer A Story... (aka, Popped My

Page 1 of 2 Next Page Go To Page:
Carter's Comment 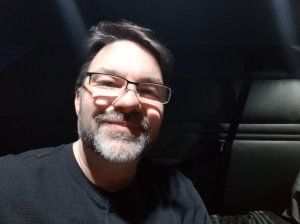 Greetings everyone from beautiful Utah. Well, I finally did it. I performed an action that my trainer can use as an example of what NOT to do for any of his future students. I knew that providing him with fodder was inevitable, not sure anyone makes it through training without at least one level 4 brain cramp, I'm just glad it is out of the way and no innocent lives or property were damaged.

The scene of the crime was Gary, Indiana and he wanted me to fuel up at a TA. Everything was ducky at this point, he had gone to sleep a few hours earlier, I was going to show him that he could feel comfortable sleeping for mundane things like fueling and so on without having to get up (anybody catch my first mistake?).

I come off the interstate , make my turn and start towards the entrance. All good so far. I see the big sign on the corner up ahead at the light and assume the truck entrance is over there (who here caught my next series of mental errors?)

So yeah... I catch the "truck entrance" sign out of the corner of my eye add I roll past it. "No problem" I think; I figure I will just circle back around. I turn left at the light to find myself in... a residential neighborhood. Crap. At least there is a fairly large parking lot with not too many cars here on my left. I'll just swing through there... Yes, that is really what went through my mind. It was 2 am, don't judge ;-)

First half of the parking lot went swimmingly, right up until I offset my way into a corner with about 2 cm between my trailer and a parked car. At least there was a storage container pretty close to the other side to take some of my focus off of the potential property damage I was about to inflict.

I was contemplating my options (going to Mexico and getting a new identity did flash across my mind, but...) when Satan came out of the bunk (in boxers, of course). He politely asked what was going on, or maybe it was more colorful than that, but I digress. After some swearing and video game level steering, he got us out.

He bought me lunch the next day. And told me to never, ever. Ever. Try to fix a mistake by creating a bigger one. He told me if I'm ever in doubt, stop, don't make it worse and then we will figure it out.

Sure glad i never made any mistakes like that .

I'm sure glad that, a: I made that mistake with someone experienced on board that could save my bacon, and b: that I didn't ruin my career by clipping a beat up '84 regal with missing hubcaps except for the fake spinner on the front.

I agree. He has his quirks (who doesn't), but he knows his s#!t and is willing to teach, not just collect trainee miles.

Interesting because I remember vividly that finding the right entrance into truck stops was one of my bigger concerns in the beginning. The car parking lots at truck stops are almost always waaaaay too small to move a rig around in so I knew I'd be in a mess if I went in the wrong entrance.

But everyone goes in the wrong entrance at customers and that sometimes. That's just normal stuff. Heck, one time I passed a customer and wound up in a very bad residential part of Washington D.C. Let me tell ya....I wasn't sure how that was gonna end. It was really sketchy for a while. Not only did the street quickly become lined with curious onlookers but I was inches from parked cars as I squeezed around tight corners. Made it out unscathed, but I'll never forget that I'll tell ya.

Brett, that would have given me a heart attack. The lesson, as always, take your time, check your surroundings and don't make a bad situation worse, throw on the 4 ways, figure out a good safe escape plan and execute...safely.

I made a left off i40 somewhere in New Mexico looking for a loves GPS said it was on the left of i40 but it was on the right and I didnt see it.. But anyways I made a right hoping to turn around at this little gas station but I was wrong and the road I turned on turned into the entrance of a trailer park lol I was freaking out luckily there was a circle in front of the park and I used that whole very little circle to turn around... It was a bad day lol

I was on tour with my bus back in '09. Headed to the hotel at 4AM after the gig - took a wrong turn down a residential street that ended in a "T". No room to turn the bus & trailer at the corner without taking out parked cars (that were parked right up to the corner). Had to back a 48' bus & 15' trailer some 300 yards without hitting anything.

Took me the better part of an hour - with wasted, sleepy musicians whining the whole time.

Happens to the best of us.

Took me the better part of an hour - with wasted, sleepy musicians whining the whole time.

Say it ain't so! Stoned musicians are whiners?

Yeah, that doesn't sound fun. At all.

Life On The Road On The Road In Training Truck Driving Stories
Click on any of the buttons above to view topics with that tag, or you can view a list of all forum tags here.