And you too Errol V! THANKS!

Vic, I'm not stalking u I swear lol. I see your concern about the money. Yes you will make more money driving a truck than whatever you're doing at 10hr. I've also said several times that these flatbed companies pay well and not one will outshine the other so much that there will be an obvious choice. It's a dangerous job simply driving, being a rookie flatbed driver just adds to that. Pick a company with thorough training and decent equipment to make your job easier. You will make money out here, but it depends more on you and your ability to solve problems and efficiently doing the job. You could make .75cpm and not make any money if you don't know what you're doing.

Also this post is very old, maybe you should start a new thread.

Ok hold the horses! I too really value you Old School and Errol V. but what you said Old School has got me now in doubt of who I want to go with because TMC pays by percentage and then .20 cpm for every mile after 150 so my question is, is TMC still worth going with or would I as a future student grad be better off going with a company like McElroy than TMC or another company? Cause if it is ALL based on my performance, and I am a rookie how am I supposed to make even decent money the first year?

Victor, I'm just going to lay it out real simple like. Everybody labors over this decision on where to start as if it were a really critical life altering decision. It's not, in fact it is so simple that most of us miss the whole point. There is enough advice in this older thread to answer any of your questions about why we are not that big on percentage pay - I don't think there is very much I can add to the discussion. Some people like it, but it has it's draw backs and detractors. You will notice that there are not that many companies that do it. You have got to prioritize what it is that is most important to you. Is it maximizing your income, is it being home on weekends? Those two choices may work against each other for a rookie driver, so which is the most critically important to you? There are flat-bed companies that try to work both of those choices into their program. namely TMC, Maverick, and McElroy. Personally I have discovered that how much money I make at this has little to do with what the company is offering me, and much more to do with what I have to offer them. What that means is that I determine how much I make by my all out effort at being the best I can be and making the sacrifices that work to make me efficient at producing the most miles.

I sleep on the property of where I am delivering the next morning most of the time, something that many drivers don't like to do. They would rather be in the air conditioned T.V. lounge at the Flying J watching the Dallas Cowboys get trounced by the other guys! I slept in blizzard like conditions the other night in North Collins, New York because I knew that it may take a while to get unloaded in that kind of weather the next morning. Had I slept at the truck stop I would have had to start my clock and wasted my hours waiting on them to unload me the next morning. Sure enough, there was such a layer of ice on the parking lot in the morning that they had to take the time to put snow chains on their fork lift just to get started on me. 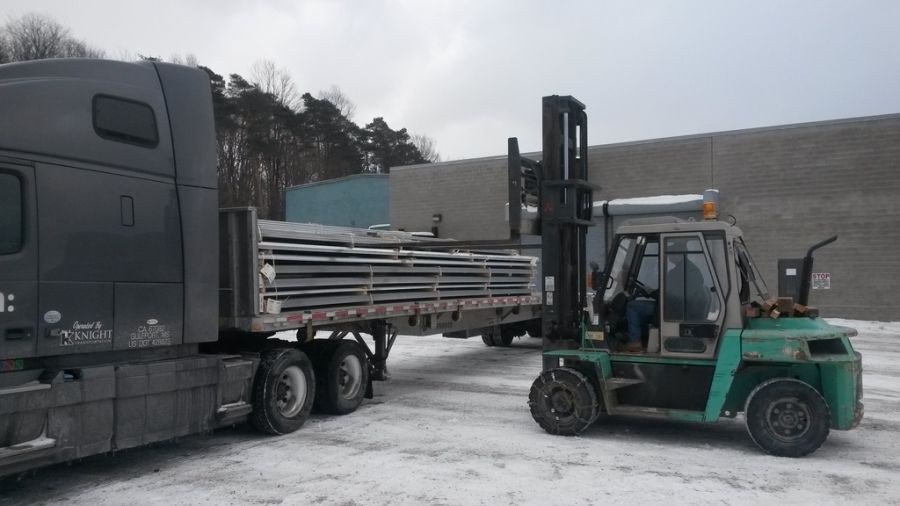 Let your focus be on how you operate, and you will discover the secret of success at this. It has little to do with what method they are paying you. TMC has developed this unique strategy of convincing people that they will make a lot more money by getting paid percentage, when the truth is that it is a cost control measure that helps them keep their payroll expenses in line with where they need them to be. Don't be fooled by all the little gimmicks out here. Just be prepared to make the sacrifices necessary for success and you will do just fine out here, and it wont matter whether you go to work for TMC so that you can always remember how to spell the name of the company, or if you go to McElroy where you will actually have to know how to spell if you need to write down the name of the company!

When I was working for TMC I was on percentage pay. I always tracked total dispatched miles per load and per week and calculated what I would have made for mileage. It was almost always very close at the end of the week, usually a bit higher with percentage, but sometimes a little higher with what mileage would have been. It's ultimately just a different way to get paid and at the end of the year you'll likely be doing similar work for similar pay at any of the flatbed companies mentioned in this thread.

Exactly. Something I liked about it personally was it actually simplified my pay compared to some companies (surprising, I know) because there were less "other" categories. Some companies will do the "short haul" bonus where it is a higher CPM or a flat rate for short loads, and then pay less cpm for very long loads. With percentage pay that just worked itself out, because short loads tend to pay the company more per mile, and long loads pay the company less per mile. Again though, I truly believe it is personal preference and your take home won't be noticeably different.

Wow am I ever thankful and indebted to you Old School, Steve C. And to the many others who have helped me through making my decision on which company and what pay method I would like! I cannot express enough gratitude for your wisdom and experience in this industry.

Just a side note, I LOVE DRIVING A SEMI!! I got to for my first road trip drive a International Prostar with twin turbo and man was it fun. Just a different way of shifting than in my pov!

So I would be much better off reading this vs reading my Georgia CDL manual?

Absolutely. Our program is based off the Illinois manual simply because it was the most thorough of all of the state manuals but 98% of the various state manuals are identical. So you can read through your Georgia manual if you like but it's not necessary. If you use nothing but The High Road you'll get awesome scores on your exams and you'll retain the information far better than simply reading through the manual.

I have to agree Brett! The TT High Roads Training Program is awesome! Easily digestible chunks of information broken down into a useable format! I love the quizzes that reinforce stuff you've already learned! Much better than the Georgia CDL manual! I may go to that manual for state specific stuff, but it isn't the primary source HRTP is!

TMC Transportation CDL Test Preparation Company Sponsored CDL Training High Road Training Program Truck Driver Salary Truck Driver Training
Click on any of the buttons above to view topics with that tag, or you can view a list of all forum tags here.