How accurate is the GPS on the Qualcomm? Is that the only GPS truckers use to find their location besides an Atlas? Or do truckers use their phone GPS or what GPS have you guys bought that was pretty spot on accurate?

Omnitracs (a.k.a. Qualcomm) is a satellite-based messaging system with built-in GPS capabilities built by Qualcomm. It has a small computer screen and keyboard and is tied into the truck’s computer. It allows trucking companies to track where the driver is at, monitor the truck, and send and receive messages with the driver – similar to email.
Sunrise Driver's Comment

Rand Mcnally GPS systems are the most common.

I'm sure you've heard this before but nothing beats proper trip planning using your Atlas. 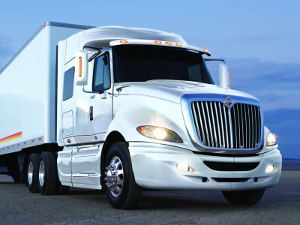 Rand Mcnally GPS systems are the most common.

I'm sure you've heard this before but nothing beats proper trip planning using your Atlas.

Ditto, use it myself

I have a Rand 720. It is about 80% spot on. The other 20 it and I have to agree to disagree. It's a wonderful tool just like the atlas. Most companies give you a fuel/route plan. They differ in how close they expect you to follow it. My current company doesn't. I fuel at pilot/flying J. I know this in advance so I make that part of my trip planning as a good driver does. They do give us local directions for the customer. Usually starts at the closest exit from the major highway in. I get the address's then I get the book out and see what best route city to city is. I compare what I came up with to what the gps says and go from there. I know drivers using the Garmin and they love them. The biggest difference I am aware of is Garmin gives you up to date traffic conditions and Rand makes you subscribe to a service for it.

Qualcomm GPS is only a tool, as with everything else. At least for ours at Swift, it seems to be outdated by about 5 years, based on highways that are that old but GPS doesn't recognize them. What's more, the Qualcomm can lose connection with the satellites, it can crash, it can go through an "update" at any moment (thus taking your GPS offline for several minutes -- not good if you're navigating a big city when it happens), it can lose a fix on your position, etc. And often it will route you through some goofy little roads to save a few miles -- not worth it; it will take you down roads that are legal for trucks, but not for the weight you're carrying, etc. But it's still a useful tool. Just gotta know its limitations and problems.

An invaluable tool is Google Maps, as you suggested, especially if you have a computer to use for the web version. Can try different routes and see the miles, use Satellite View to get a look at the customer's facility and where to enter and park, and even Street View to read signs and virtually drive difficult routes before going there. I wouldn't be without it.

The written text directions provided by the company sometimes can provide further assistance, but they too are often outdated, confusing, or flat-out wrong.

Bottom line: for a difficult route, I look at every bit of information available and then try to make sense of it. And even then, keep your eyes open to watch for something unexpected along the way and be ready to adapt, fast (often there is no opportunity to stop and make new plans).

Omnitracs (a.k.a. Qualcomm) is a satellite-based messaging system with built-in GPS capabilities built by Qualcomm. It has a small computer screen and keyboard and is tied into the truck’s computer. It allows trucking companies to track where the driver is at, monitor the truck, and send and receive messages with the driver – similar to email.
Errol V.'s Comment

I've used the QC GPS since my mentor training. No problems (ok, a few bad reception situations, but my backup is Google maps.)

Do not depend on google maps for your plans, though. That's what the atlas covers: low clearances and weight restrictions. But overall, the QC GPS lady tells me where to go.

QC is ok, I find it likes to go down more the farther north you go. It has more then once tride to send me down rr tracks, dirt roads, low clearances. And bridges that I was to heavy for. I use google maps satilite view to see were truck interences are for plants. My atlas is always checked agenst my QC route And I make adjustments as required . but your head and eyes are the best tools you have put there so use them the most.

I use the Qualcomm gps, my rand McNally gps, and my atlas for all of my trip planning. I like to have both gps's plot their respective routes and cross check them in the atlas.

The Qualcomm one tends to find the shortest route, while the rand McNally looks for the quickest. Both can lead you astray at times because neither is perfect.

When I get within a few miles of my destination, I tend to use the Qualcomm since it will often have the truck entrance to the location I am heading programmed into it. Whereas the rand will take you to the exact street address you programmed in.

Long story short, they are all useful tools, but don't rely on any of them exclusively.

Omnitracs (a.k.a. Qualcomm) is a satellite-based messaging system with built-in GPS capabilities built by Qualcomm. It has a small computer screen and keyboard and is tied into the truck’s computer. It allows trucking companies to track where the driver is at, monitor the truck, and send and receive messages with the driver – similar to email.
Brian 's Comment

All I have in my truck is the Qualcomm gps, I have used it for 15 months, dispatch sends a preloaded trip, If in doubt, I double check with my atlas, and also check Google maps.

It tends to send you on state highways For shorter distance on trips, but looking at your atlas will help you plan a route using interstate highways.

Yeah they definitely aren't cheap. Now what I did was save up a lot of rewards points at a truck stop and used them to but mine. And when you consider the majority of the points came from fuel and def which my company pays for, the cost was much less of an issue that way.