Page 1 of 4 Next Page Go To Page:
Pianoman's Comment

Get your popcorn guys, this one's a doozy.

So I was supposed to deliver at this Walmart DC in Brundidge, Alabama, tonight: 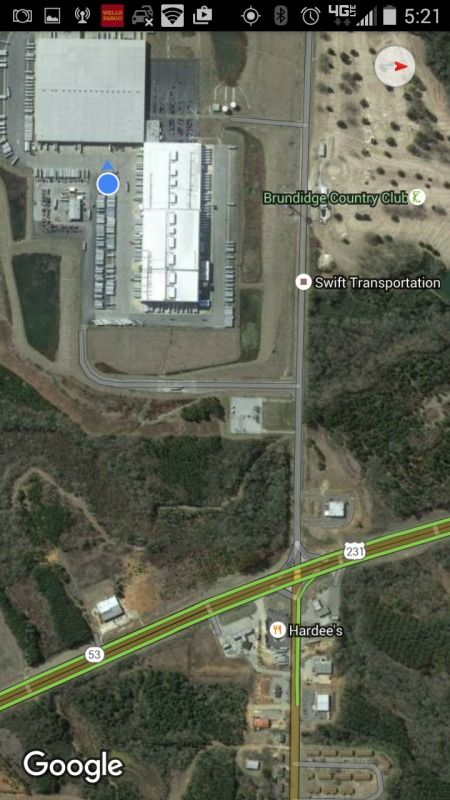 Sorry, I don't know why the image is showing up so big like that.

I was planning on parking at the Hardee's like the preplan said to do, but I got there a little later than I originally planned on and it was completely full (go figure!). There happened to be a policeman in the gas station next door, so I asked him if there was anywhere to park. He said there was a gravel spot north on highway 231 I could park on, but said to be really careful turning around at night cause it's pitch black. I found the spot and shut down next to a couple other semi's, but I'm thinking to myself, "Is this guy seriously thinking I'm gonna make a U-turn on a highway?" ...Not that I haven't ever done it, but I know I can get fired for that. Here's a shot of where I shut down:

Again, sorry for the size of the image. You probably see where this is going now. The pink blob is where I shut down. I didn't know what was up ahead, so I got on Google maps satellite view and tried to find a spot to turn around down the road. If you want to check for yourself, just look up "Walmart DC Brundidge AL" and you'll find where I'm talking about. I couldn't really tell where would be the best place, but I figured I'd just start driving that direction and I'd find somewhere to turn in. It looked like there were a few businesses or at least side roads up ahead. No big deal. When I got up around 2:30 in the morning, the cop was right: pitch black. I really debated doing the U-turn but again figured I'd just find somewhere to turn around. But I went ahead and rerouted the qualcomm gps from my location, and it said to turn down that road with the big yellow arrow--3356. It looked ok when I got to it so I turned in. DIRT ROAD. I got out and looked...no signs saying private property, no trucks, whatever. I had taken a dirt road with my trainer before so I thought maybe it wouldn't be bad--it was pretty wide too. Last thing I wanted to do was back up onto that highway.

So I started down the dirt road. My plan was that if it looked like I was gonna get stuck, I'd back up til I got to the highway and call the police to stop traffic for me. In hindsight, I should have just called the police right where I was. I made it about a quarter mile before the low branches started. "Ok, so they scrape up the top of the trailer a little bit...not a big deal as long as they don't get lower." They got lower. And lower. I was almost to the end of the road when I got to a bridge (roughly where the red mark is, maybe even a bit further) with a 23T weight limit. I was loaded to 72K. Not happening.

I was so far down the road, it was so dark, and I was in the middle of a dense little forest. This was a true nightmare. And I rightfully felt like an absolute idiot. I called the police and explained the situation. One came up behind me and the other in front of me. The older cop was piiiiisssed. He actually told me I should have backed onto the highway. Really?? The younger one, who had come up behind me, was like, "Definitely haven't had this happen before." They spotted me while I backed all the way down that road back to the highway (I believe it was about a mile or so), stopped traffic for me, and then followed me to the Walmart DC. As soon as I pulled in, they left.

So there you have it. The only good thing about this: I didn't get a ticket, and I didn't hit anything. Well I scraped up the top of my truck a little bit, but that's it. And I learned that it's way better to just call the police in the first place than get yourself stuck and then call them.

Oh yeah, and when I did get to the Walmart (late for my appointment now), that back was the easiest one I've ever done.

You didn't hit anything or get cited? That's not a bad story :) I've had the gps tell me to turn down roads with "no truck" signs or roads that I obviously didn't want to go down often enough that I don't have much faith in it any more. Anyway, good job that you didn't just back up onto the highway (which I might have been tempted to do, even though it's something that I could get fired for as well).

You didn't hit anything or get cited? That's not a bad story :) I've had the gps tell me to turn down roads with "no truck" signs or roads that I obviously didn't want to go down often enough that I don't have much faith in it any more. Anyway, good job that you didn't just back up onto the highway (which I might have been tempted to do, even though it's something that I could get fired for as well).

What it really comes down to is that I didn't want to call the police, which I ended up having to do anyway..

Oh and another driver came up to me at the DC saying he was one of the people who had to stop for me--when he parks where I parked, he just takes the U-turn.

I've done that. I figure if you're pulled off on to a side area, that it's not really a u turn, it's just a really sharp left turn. But I don't know if my company would agree.

Don't you just love doing this stuff at night? 😃

I haven't been to this WDC, all I know is what you say and a look at Google maps/ satellite view.

Part 1:
Some the highway is undivided at your overnight pullout, there was plenty of room for a big u-ey. At 0 dark 30 traffic should be non-existent. There was nothing in the way, it seems, for you to bash as your trailer swung around.

Part 2:
In spite of what the GPS lady says, I wouldn't head down unknown narrow roads in the dark. Keep driving. I went 20 miles on a (better) highway to turn around rather than risk any kind of getting stuck.

Part 3:
A closer look at the satellite view shows a couple-three places just past (dang!) where you turned onto your fateful dirt road, with room to turn around in.

This is called "Getting the Hang of Driving This Beast".

I haven't heard about any Swift "policy" or "rule" about U-turns. Didn't ask, either. However, making a U-turn and causing damage will certainly be on you.

I have made several U-turns. (There! I said it!) Always in a place where my trailer had an absolutely clear place to swing around. Where no other traffic would be inconvenienced by my antics. Where I could turn with minimal mini-backs.

Once, late at night, I got out and walked around my turn area, just to make sure it was clear and I could get turned around in less than 30 seconds.

Don't feel bad. I pulled a u turn on a highway over here in Kansas and almost got stuck... I don't know what I was thinking, pulled a swift move for sure, but no one was watching...

Thanks Errol and Devan. The reason I didn't feel comfortable pulling the U-turn is that where I was parked is just over the crest of a hill, so I can't see what's coming southbound for more than a quarter mile. And the traffic never stops on that highway for some reason, even though it's a small one. I could've done the U-turn but I just didn't want my camera to come on or a cop to see me.

I haven't read any Swift policy about u-turns, but in messages from my DM to her fleet, she has mentioned drivers getting caught with the dash cam doing u-turns. She mentioned it right along with not wearing seatbelts and texting, so I think it's considered bad. And my first mentor said you'll get fired if you get caught doing one (although he may have been exaggerating).

Most of the large carriers have a no U-turn policy. But regardless of policies or the lack thereof, most of the time a U-turn in a big rig is risky at best.

I didn't feel comfortable pulling the U-turn is that where I was parked is just over the crest of a hill.

Excellent reason for No U-turn right there! That and the traffic. It's like Russian Roulette, isn't it?

Swift Transport Advice For New Truck Drivers First Solo Months On The Road Hard Lessons Learned Life On The Road Safe Driving Tips
Click on any of the buttons above to view topics with that tag, or you can view a list of all forum tags here.