Errol, I saw somewhere online to get a piece of galvanized or black steel pipe. A 10 or 12 inch long nipple threaded on both ends. I'm guessing 1 1/4 inch and buy a cap to put on 1 end. Slide it in the hole and the cap keeps it from sliding through. I'm gonna pick one up myself next time I'm home!

Black pipe is less expensive. I've seen people buy an elbow rather than a cap because it sort of gives you a handle, if that makes sense?

Thanks BZ. That makes more sense! I will take it a step further. 10 inch nipple, 90 degree elbow, 6 inch nipple, cap on the end of the 6 inch. Perfect L shape with a handle to grab on to. Kinda like a Long Barrel Colt!

Bravo Zulu great minds think alike. I was in Lowes to get the pipe. Lowes has only 10" precut nipples. I looked at the caps and at the Ells. For the 50¢ difference, I got the Ell fpor the reasons Tractor Man said..

@Tractor Man: the short end of an Ell makee for some kind of weird giant caliber Derringer handle!

There's a power switch on the floor by drivers seat that shuts off all power to the truck. When my friend got assigned his truck he thought the battery was dead. When mine didn't start I looked for a switch ... eureka!!

Not all EZPASS Express are for trucks. Do NOT go through the EZPASS express lane in the Washington dc /baltimore area. Trucks are not allowed Hrm. Lets see what I can contribute.

I already mentioned in a different thread about using the way a truck crabs together when parking brakes are applied to break loose tandem pins or push against docks at picky shippers or receivers.

If you have a Velcro privacy curtain in your truck, Velcro the two halves together, then push both halves to one side. Never have to fight to get the Velcro to line up again.

Carry a few feet of Romex wire (household electrical wiring) in your side box. It's sturdy enough to hold your doors tight against the truck in a tight dock. It's also strong enough that you can use it to entirely replace a missing door retaining chain.

Carry 100 foot of 1/2" rope in your side box. You can tie the rope to a pallet and then to a tree or other heavy object, and then drive the truck forward very slowly to drag pallets to the back of your trailer at receivers who have no docks, or in a truck stop if your load shifts and you can't get legal because too much weight shifted forward.

That rope also comes in handy if you get a trailer with a bent mud flap bracket. Tie a load lock to the bracket with a whole bunch of turns of rope, then use the super-long lever to bend the mud flap bracket. I actually did this today on a trailer I picked up. The mud flap bracket was less than a half inch from the left rear outside tire tread. 1/4 inch angle iron is a serious beast to try to bend by hand when it's only 2 feet long. Add an extra 5 feet or so, and it's not bad. Of course, the load lock bent too, but not too much. Load locks are a LOT cheaper than tires, and they can work just fine when bent slightly.

We delivered astroturf dye to a high school and using load straps, pulled the pallets to the rear of thd trailer so they could unload it. Their weird offroad looking forklift couldn't reach that far into the truck. Also did that at a small family owned lawn equipment dealer with no dock. That totally works!

I have pulled many things to the tail from the nose of the trailer using lifting straps and or chains. You can buy a pallet puller. Which uses a scissor action to clamp onto a pallet. It has a chain to hook up to.

Several people have suggested using Google Map's Satellite view to check out locations. Here's another way to use Satellite view. Take a look at the size of the corners on the left and right sides of this intersection: 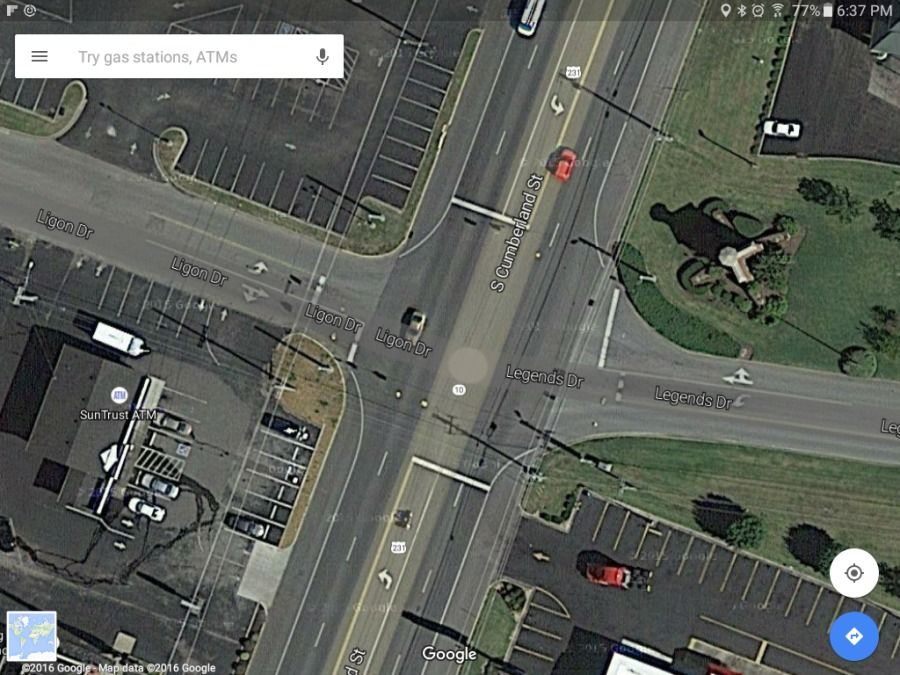 The left side is for "regular" 4-wheel traffic. The right side street is actually the truck entrance to a Walmart. The corners of the turn are much bigger because, you know, trucks need more room.

If you're using Satellite view to look at roadways you may be travelling on, check the size (radius) of the intersectionn corners, too.

Have a pair of Vise-Grips™ (or generic equivalent) in your truck.

Whenever you stop at a place that has a bathroom, use it! Even if you don't feel like you have to go, do so anyway.

Whenever you stop at a place that has a bathroom, use it! Even if you don't feel like you have to go, do so anyway.

Never throw away an empty bottle. In the middle of the night they get pretty valuable.

You can jump your truck battery with your reefer battery. Saw a dry van dead yesterday.. And he didn't even have cables..asked to borrow mine. One time I was glad I drive reefer hahah.

Advice For New Truck Drivers First Solo Months On The Road Items To Bring On The Road Life On The Road Truck Equipment
Click on any of the buttons above to view topics with that tag, or you can view a list of all forum tags here.