Why Do You Need A CB? 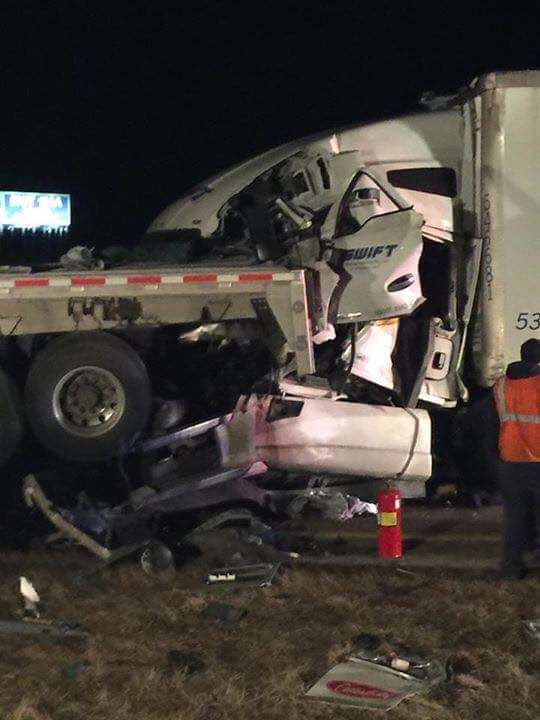 This is why. This accident happened yesterday on 70 at the Ohio/Indiana border. Traffic was stopped for another accident, this driver was still running 60mph right into the back of the stopped flatbed. The driver of the Swift truck died, the impact was so hard that it broke the kingpin on the flatbed driving the trailer into the truck and knocking the cab off the frame.

Get a cb, use it and pay attention while driving. This should never happen. 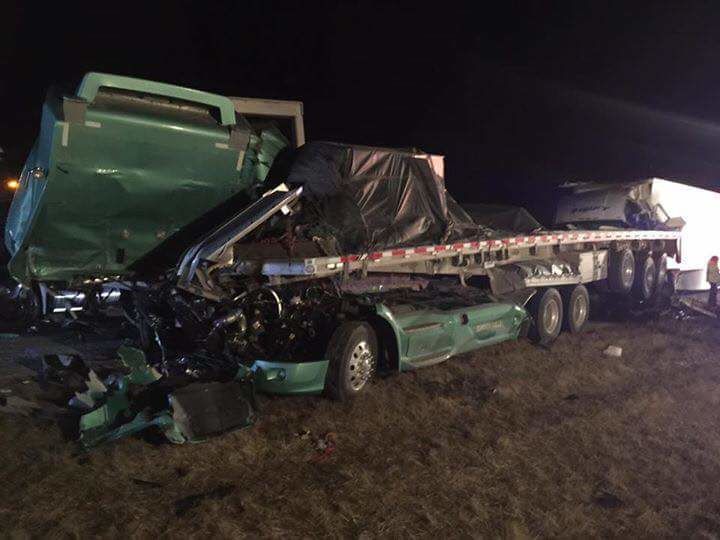 Horrible accident. Not entirely sure a CB would have prevented it.

And not that I don't own one and advocate using it - but if you're tooling down the road listening to music, you sure you're going to hear or notice a traffic discussion - if the guys in the flip side are even warning about it?

Or are you saying that drivers should listen to nothing but the CB when they're in motion?

Traffic was at a standstill when this happened. You'll never come up on a situation where traffic is stopped and not hear radio chatter asking mile marker, which lane is clear or even local drivers giving re route directions. These pictures were taken by a good friend and Air Force buddy who had just left Wright Patt in Dayton. He heard about it 10 miles or more before getting to it and apparently other drivers were screaming to back it down.

I should have added on the fact that it happened on a fairly flat stretch of road, no hills or curves as a surprise and yes a cb can save your life.

Horrible accident. Not entirely sure a CB would have prevented it.

And not that I don't own one and advocate using it - but if you're tooling down the road listening to music, you sure you're going to hear or notice a traffic discussion - if the guys in the flip side are even warning about it?

Or are you saying that drivers should listen to nothing but the CB when they're in motion?

As long as you leave your CB volume up higher than a whisper, yes you will hear it over your music. I listen to a LOT of hard rock/heavy metal (think bands like Slayer, Pantera, Sepultura, etc.), and I can still hear when someone says something on the CB. I may not be able to make out the gist of the conversation, but you better believe if I'm hearing a lot of overlapping chatter I'm going to mute the music and see what all the hubbub is about.

Having said that, I do tend to agree there was more going on here than just a lack of CB on the part of the Swift driver. Plain old inattentiveness coupled with a whopping dose of impatience would be my first guess. By the looks of it, he hopped into the hammer lane to get around slowing/stopping traffic, and wasn't watching what was happening in his lane when it came to a stop. Probably futzing with his phone or rooting around in a cooler on the floor.

But yes, if he'd had a CB on, he most likely would have known about it long before he got there, and might still be able to convert oxygen into carbon dioxide.

Shoot - hit submit instead of PREVIEW.

BRETT - BRING BACK THE EDIT BUTTON!

More on the accident from a local news channel.

I'm not denying a CB isn't a useful tool. Just that driving around paying attention to the CB all the time, can make you NUTS.

Now - I use one on road trips - and I shout out to the flip-side about traffic hazards, speed traps and the like occasionally.

But there's really no way to tell whether this Swiftie had one, was listening or not, or that having one/not having one could have in any way prevented this accident.

News article claimed he was going 70? Thought these guys were governed at 60? This was an inattentive, distracted or asleep at the wheel driver.

The terrain in that area is flat, the road is straight - no hills, mountains or curves. It was daytime, weather was clear and unremarkable. Speed limit there WAS 70 - but I doubt he was actually going that fast (in a Swift truck - no pokes at Swifties - just we know they're hobbled).

Prayers to the families of both truckers.

After a long discussion, here on TT, we did get a cb. Took a week, trying to figure what we needed. Price, antennas, etc. We were over thinking it. We were thinking what a big hassel we're getting into. We bought a $45 one, hooked it up to existing cables and turned it on. Read the instructions, channel 19 for emergencies, skwelched it down and didn't hear much for 2 days. Then out of nowhere we heard "break lights!, break lights! After exit such n such! Blah blah blah!" Around the curve and over a small hill we see a mile or more of stopped traffic. 4 wheelers were turning around and going the other way! This was a major interstate in Georgia. We found out a twister whipped a tt on it's side and tore thru trees and huge billboards. We found out how long they were there, what happened, when they started to roll again. We got to warn drivers behind us to slow down. 45 bucks. No excuse.

BRETT - BRING BACK THE EDIT BUTTON!

We never had an edit button.

Robert, thanks for bringing this up. You know I'm a huge fan of CB radios and I personally think it's borderline irresponsible to drive without one knowing how critical it can be for safety. This is the perfect example.

But there's really no way to tell whether this Swiftie had one, was listening or not, or that having one/not having one could have in any way prevented this accident.

Having his CB on would have saved his life. I don't doubt that for a moment. Traffic doesn't come to a stop on the Interstate without other drivers giving the heads up on the CB. You can be certain people were screaming about it long before he ever came to it.

What's interesting is that Swift will know exactly what that driver was doing because of the driver-facing camera.

What's also interesting is the future of CB radios as far as "distracted driving" goes. If talking on cell phones is illegal, how can they say talking on CB radios is legal? I'm hoping there isn't enough attention on the matter to worry about it because they would be doing a huge disservice by preventing real time communication amongst drivers in close proximity like that.

I would also _love_ to see accident investigations for rear end tractor trailer collisions account for the CB radio. Was there one present and was it on at the time of the accident? I've never even heard a study on this but I'd love to hear that they're looking into it.

This accident happened yesterday on 70 at the Ohio/Indiana border. Traffic was stopped for another accident, this driver was still running 60mph

Driver was on I-70, "running" 60mph, so the Swift governor was still working.

It appears to be a night scene. Stopped traffic at night is worse than in the day. Unless you see flashing lights or brake lights, the only clue is the tail lights ahead seem to be getting larger.

Any time I come up on stopped/slowed traffic, my flashers go on, to give people behind me a heads up.

Advice For New Truck Drivers CB Radio Cell Phone & Wireless Driver-Facing Cameras Safe Driving Tips Truck Driver Safety Trucking Accidents Understanding The Laws
Click on any of the buttons above to view topics with that tag, or you can view a list of all forum tags here.