Has anyone ever had to use one? Just wondering I know it's a worst case scenario, do the high piles of rocks actually slow the truck to a stop or the sand?

Yeah they definitely work. I've never used one but I've seen a few trucks in them. You're going to come to a stop in a pretty big hurry it seems. But it's certainly better than the alternative if you've lost your brakes. The ones I've seen were basically pea gravel and the front end of the trucks wound up buried to about the depth of the tires. They would tow you out from behind. I'm sure it's going to do fairly extensive damage to the front end of that truck, but I wouldn't expect it to be a total loss, unless it twisted the frame itself pretty good. Then it goes into the shop for dismantling.

I'e never had to use one either. If you just take your time, respect the grade, and use a low gear you won't ever come close to using one.

I ride the jake all the way down the grade. Using brakes as needed. Never once have i ever felt i was out of control. Just gotta be smart and stay within your limits. And in cases like the rockies and other steep mountains, be WELL within your boundaries just in case.

Also keep in mind that grades that HAVE TURNOUTS, give you a pretty good clue that it's a hill you want to pay pretty good attention to (brake check pulloffs are a clue too).

They will do damage to the truck (depending on how fast you were going when you hit. You will typically be cited and charged a bundle to be hauled out of one. And stand a good chance of getting a ride on the greybus home.

These are 95% driver negligence. Brakes fail because they get overheated (from improper use), or they weren't working correctly (defect - pre-trip).

Better to use one than to take out a school bus or go over a cliff - but better to NEVER HAVE TO USE ONE AT ALL.

I have seen a couple of trucks in the runaway ramps in Colorado on I-70. Coming out of the tunnel, there's a 7-mile long 7% grade with two ramps. Here's one of the ramps, with a truck stopped at about the same place I saw one. 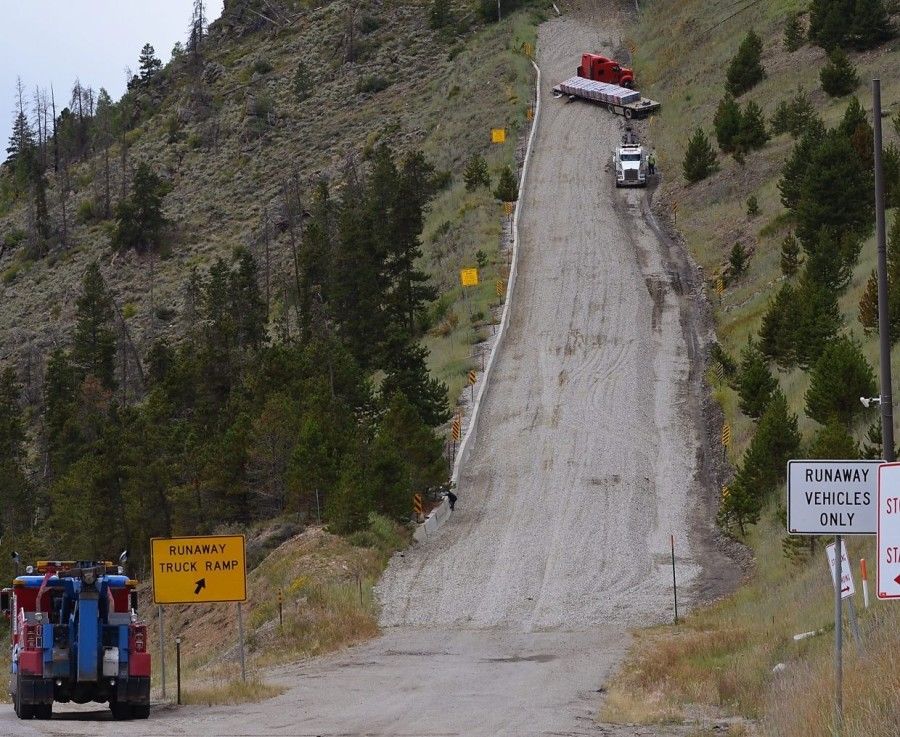 From the accompanying article:

"According to a Colorado State Patrol officer on the scene, the summer months see more runaways than usual — about two or three per month."

That's right, more people lose it during the nice weather than when the mountain is covered in snow and ice. One of the hazards of gaining experience is that people have a tendency to become complacent about things that are always dangerous, like 7-mile long 7% grades.

Another driver in Colorado told me a story from when he was a rookie. He came over Monarch Pass headed east. The west side of the hill was icy and he felt his truck slip a couple of times. It scared him. A while later after he'd gotten over the hill he saw another truck from his company headed west. He called him on the radio to warn him that the west side of the hill was icy. The other driver said, "Ah, I've been over that hill a hundred times."

A while after that, my friend told me he stopped in Alamosa to fuel up and the people in the truck stop were talking about a bad truck wreck on Monarch Pass. Yep, it was the guy who had "been over that hill a hundred times." The driver who told me that story has over 20 years of experience now. It's a story he tells newer drivers (and himself) as a reminder that experience doesn't mean you're exempt from danger on roads that are inherently dangerous.

There's one runaway ramp in Wyoming that has steel cables across it since it's short. The cables will slow the truck down enough to stop it. There's an interesting video about it on YouTube.

I know there are i think 2 runaway ramps going down Monteagle in TN. The grade itself isn't that bad (only 5%) and it's like maybe 5m or so if that. First time going down it after stopping at the brake check area, I followed the suggested speed sign of 25mph carrying about 40k lbs. Medium Jake all the way down, I was honestly bored... next time I went down it, 35k lb load, 45mph with medium Jake, still a smooth ride.

Medium Jake all the way down, I was honestly bored

Much better to be bored than some of the other options.

Medium Jake all the way down, I was honestly bored

Much better to be bored than some of the other options.

Those rollovers are quite exciting!