Page 1 of 2 Next Page Go To Page:
Heavy C's Comment

So I've been out of the loop here for a while, so I'm not sure how much you guys have been talking about this company or this truck. However this is new news. I may never get to drive one of these trucks, but I can't tell you how excited I am to see this moving forward.

We already have a failed hydrogen network for fueling trucks.

The problem is our industry is slow to adopt new technology and resistant to change. Rear-backing cameras, collision avoidance radar, headlights bright enough to make it seem like you're driving in daylight - all standard even on mid-grade family sedans yet not coming to your CMV anytime soon.

There are several attempts to move from diesel currently and have been in the recent past. You don't have to look too hard to find LPNG pumps (Liquid Propane Natural Gas - methane) at truck stops. You can't blame the trucking companies. They have to pay more for the truck up front, risk uncertain fueling options and then face a lower resale value for the truck.

A live load once took longer than expected so I had to limp into a truck stop after dark hoping to find somewhere to park. All the regular parking spaces were occupied so I asked the manager about parking options. She suggested I park next to the LPNG pumps. I asked, "Won't that be in the way if someone wants to fuel their truck?" She replied, "No. We put that pump in 8 years ago and we've only used it once!"

There may be a slight difference in this latest attempt at alternate fuels though. First off of the social and political climate. The pressure has never been so high to make a change. The ever increasing need to either get away from fossil fuels or at least make big jumps in MPGs is becoming a global issue. America won't be able to sit back much longer with the rest of the developed world advancing. No matter how stubborn drivers are. Second thing is there two major contacts Nikola has in place for when produce rolls out. US Express and Anheuser Busch becoming partners for initial models is huge. These are two top players in the trucking game. And from two different areas. OTR and local type driving. If they can prove these trucks are successful in both arenas, I bet you'll see that next time a fleet is ready to upgrade they may just start signing on.

And it goes beyond just the fueling stations. If this truck gets anywhere near the stats it's projected to get and companies can save money whilst at the same time getting environmental and political groups off their backs. I think your gonna see a big shift in this industry.

America won't be able to sit back much longer with the rest of the developed world advancing.

As a Russian foreigner, I couldn't help but laugh out loud. In Russia the great majority of roads don't even have lanes. Yes, we are definitely starting to fall behind from the advancing world. Lol.

The problem in the U.S. is that we only do something if some huge corporation can make a lot of money from it. We don't think ahead and make strategic investments in critical infrastructure for the good of our society. Our healthcare, education, Internet, and most of our infrastructure is all profit-based. So in the end, to make the most profit means to provide the worst service that people will tolerate at the greatest price they'll tolerate.

As far as political pressure, at the moment there is no internal pressure to do anything for the environment, and our current regime doesn't seem to care whatsoever about outside pressures.

For instance, the media would have you convinced that electric cars are some far out, futuristic idea we're trying to develop. Yet that's the opposite of the way it is. Electric cars were super popular and functional at the start of the 20th century! Look at this:

Before Tesla: Why everyone wanted an electric car in 1905

Back then the government should have looked at the situation and simply mandated electric cars for the highway. Every last scientific resource we had would have all focused on developing the best electric cars and electric infrastructure to support them. Instead, we went with gas and diesel and that continues to this day because in the short run gasoline was cheaper. Once the large oil companies became rich enough to command vast amounts of political power they maintained their hold over society around the globe. What a sad reality.

If you look at the stats for healthcare, education, Internet speed and price, and tons of other metrics we've been steadily declining for a long time. All we hear is propaganda about how amazing our country is, and it is in a lot of ways, but we are indeed slipping further back all the time in the most critical ways. The government is the only entity that can step up and mandate certain technologies or the creation of certain types of infrastructure but they corporations control the government in so many ways that we end up with everything being profit-based.

It was roughly 1995 when the Internet first became mainstream. Can you imagine where we'd be if the government would have immediately set up a program to run fiber optics to every home and business in America??? We could see Internet would be one of the most critical infrastructures and most powerful driving forces in our society forever forward.

What did we do about it? Turned to wireless infrastructure and turned the entire thing over to a couple of corporations so they could provide the worst service we would tolerate at the highest prices we would tolerate. Here's a graphic from late 2017 showing the U.S. is ranked 114th in broadband prices:

The Most And Least Expensive Countries For Broadband 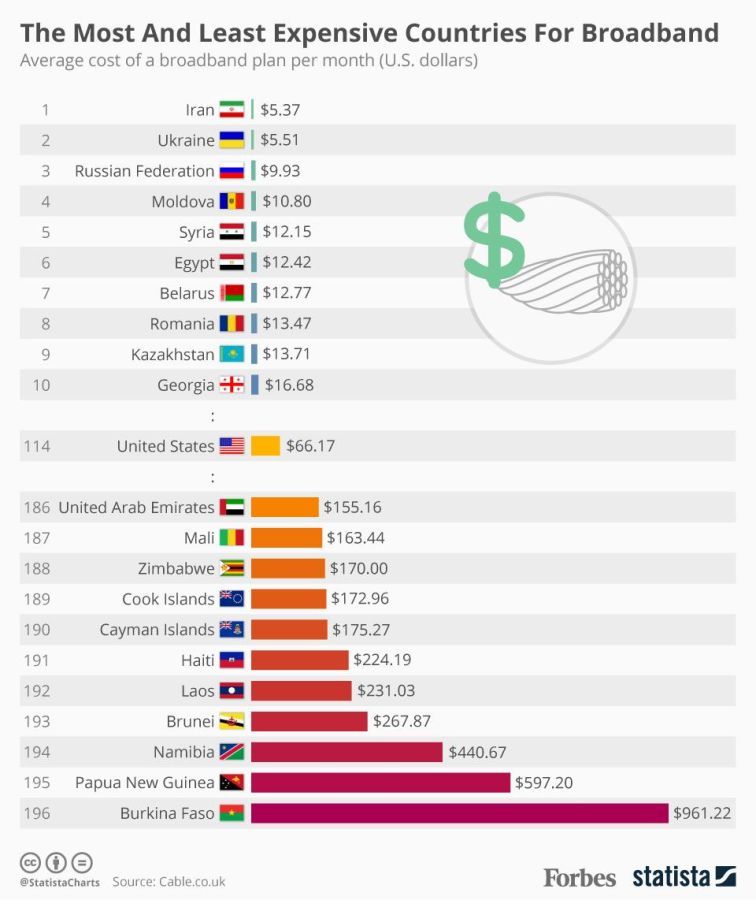 Ok Daniel one country. The majority of the EU, Japan, South Korea. There are many countries that are leaving is behind in more than just one category.

Brett so where do you stand on this particular thing, this company. Do you hope it succeeds? Do you think it will fail? What happens to the best of companies that already have a sizeable investment already put into this company?

Brett so where do you stand on this particular thing, this company. Do you hope it succeeds? Do you think it will fail? What happens to the best of companies that already have a sizable investment already put into this company?

I don't think major infrastructure changes like this can happen without massive amounts of government money and support, and there's no way to predict if that's going to happen or not. I'm in support of all technologies that can get the job done with less stress on the environment.

The most popular voice you'll hear in the media is, "Keep the government out of it!" but I don't agree with that. Most of the people saying that are corporations making major profits in the current environment, which isn't always the best environment for our society as a whole. I wish the government would step up do it's most critical job which is to mandate changes that are logical and necessary for advancing our society as a whole, which includes building the best infrastructure we can and protecting the environment at the same time.

Yea we certainly can't predict what's gonna happen. They do have a lot of things stacked against them. I for one am pulling hard for this to do well. Even if I never get the chance to drive one, I really want to see this industry take a step forward.

"I have no doubt that Andy will continue on with our great and lasting EPA agenda. We have made tremendous progress and the future of the EPA is very bright!"

The future of the EPA might be bright, but there won't be a habitable Earth if they execute their agenda.