Rise in Insurance: The rise of mandatory insurance coverage WILL PUSH many smaller companies and O/O's right out of business. Right now - insurance is one of the largest line item expenses for those that aren't self-insured (upwards of $12K a year or more - for trucking liability insurance). Increasing potential premiums by a factor of 5 (requiring $5Mil coverage). This will change the expense of being legal, to, in many cases - almost 50% of gross revenue. Whether you like the idea of O/O's or small companies or not - this is going to end up being grossly unfair. As OOIDA elaborates - the winners here will be the LAWYERS - who can get upwards of 1/2 a settlement, ESPECIALLY if it goes to court. Commercial vehicles have a huge target on their backs - because the shysters know that their minimum coverage is already that high. Except in the case of wrongful death or EGREGIOUS NEGLIGENCE on the part of the driver - how many accident victims are really entitled to $1Mil (or $5Mil) for a settlement?

CRST wins poaching lawsuit. I know we have a CRST vet here as a member - so I will refrain from talking smack about them. Honestly - if you sign a contract and you know ahead of time that you are joining a company that's 100% teams - then you are bound by that contract. CRST is somewhat legendary at enforcing and collecting on it's training obligations. And while companies are not bound to NOT HIRE someone based on a non-compete in the DRIVERS CONTRACT - this judgement now makes them bound by a contract they (in this case Swift) was not a party to. And I don't think Swift was PURSUING CRST trainees - but they weren't turning them away either. And I'm sure word gets around amongst disgruntled drivers that Swift will take you on, even when CRST tells them you're under contract. Somehow CRST was able to convince a jury - that Swift was going out and PURSUING these drivers, versus simply taking an unsolicited application. CRST's threat of suing companies, when they get an employment verification request (he's still under contract, we'll sue you if you hire him) - has now been given TEETH. Which will in turn, discourage other companies from hiring their drivers that leave.

Again - not going to smack talk on CRST, but conversations here and elsewhere lead me to believe that their turnover rate on trainees is really high in comparison to other companies. Main complaints come from people that just aren't cut out to run forced teams forever - in a truck with a stranger that never stops moving, for a year. I wouldn't sign up for that - but some folks do - and sadly, if you are an adult and SIGN A CONTRACT - they are going to ENFORCE IT. I'm disheartened by this decision - but they must have proven to a jury that Swift was actually TARGETING CRST drivers.

What is funny is that CRST was targeting Prime drivers, hence, Prime added a non-compete clause as well.

JB Hunt, Amazon, and CRST have been emailing me since I switched my CDL back to NJ (still under contract). I am guessing NJ sold my info. My trainee from MS (3 momths left on contract) gets emails from JB Hunt and CRST as well.

If they got the info from the state DMV , the recruiters may not even know these are new drivers under contract. 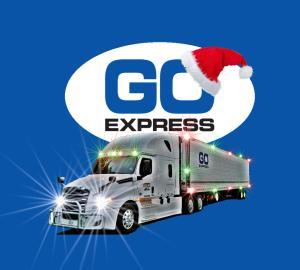 I love sharing this letter - every recruiter has gotten it many, many times. But if you are under contract with CRST, until you finish it or until you pay them back, every place you apply gets this letter: 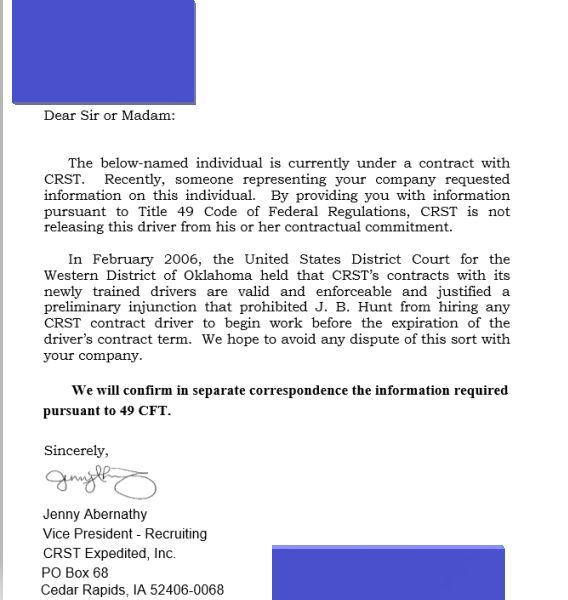 I love sharing this letter - every recruiter has gotten it many, many times. But if you are under contract with CRST, until you finish it or until you pay them back, every place you apply gets this letter:

I've seen this case before.

Interestingly - there's a stretch between CRST drivers under contract wanting out, and other companies soliciting or actively poaching their drivers. Nor is the contract between CRST and the driver, binding on a subsequent company. It would be in the subsequent company's best interest to put the driver under contact, and pay off their obligation to CRST if they're going to hire people that are still under contract.

In any respect - don't see this judgement as a good thing. While the contract is being construed as a non-compete, it is in reality more along the lines of a financial obligation between the driver and CRST, more than an enforceable contract prohibiting other companies from hiring someone under contract. Non-competes in many states are considered unenforceable, as long as trade secrets or company confidential data is not disclosed (which is usually covered under an NDA).

While the judgements are good for CRST - they are bad for drivers and other companies, as it escalates a purely financial contractual obligation between CRST & the driver - to a binding injunction against all trucking companies.

In the short & long of it - if you SIGN A CONTRACT - BE READY TO LIVE UP TO IT. If you go with CRST - you better STICK TO YOUR OBLIGATION, or just get out of the industry.

It appears, from the way this goes - even if you leave CRST and take some time OFF the road (even up to forfeiting your CDL) - if you decide to get into trucking again - CRST will hound you to the ends of the earth (unless you pay off your training obligation).