I just read a post from one happy fellow that got accepted by western express..hes in a similar situation with tickets..j read the reviews and they are pretty bad..I'm happy for him but my question is now getting issued faulty equipment that will get dot violations ect and how does that effect your licence ? I read two hours of horror stories..bed bugs..no pay..you name it..I'm willing to do whatever it takes that's legal to succeed..just wondering what your thoughts are..I'm very grateful for your time and effort

I read the reviews and they are pretty bad..I'm happy for him but my question is now getting issued faulty equipment that will get dot violations ect and how does that effect your licence ? I read two hours of horror stories..bed bugs..no pay..you name it..I'm willing to do whatever it takes that's legal to succeed..just wondering what your thoughts are..I'm very grateful for your time and effort

I know you didn't read these reviews on Trucking Truth. Think about this, Steve: who wants to tell the world their story, those who are happy with their job or those who feel they got screwed?

The happy people are too busy enjoying their work and too busy making money to stop and write a glowing review. But what about someone who didn't understand how things worked, felt they were short-changed and were fired?

Western Express is a large company simply because they do things right by both their customers and their drivers. No company is going to put broken or illegal equipment in the road - frankly, because it will cost them more than it does to fix it or sell it off.

You just joined us here. Before you get too much farther, please read other posts. This website isn't called Trucking Truth for nothing. Read this post, by TT's founder first: A Thank You, And A Promise To Our Community

I'm willing to do whatever it takes that's legal to succeed..just wondering what your thoughts are..

Stephen, I completely understand your feelings. Reading internet reviews on Western Express is nothing short of depressing - it's mind numbing.

I had some issues getting my trucking career started. I got rejected multiple times. Finally Western Express gave me a shot. I can make a single phone call today and have a trucking job anywhere I like. Partly that's due to them taking a chance on me. I had a great start to my career there, and I often say that I'd still be there except I got a really great offer from someone else. I worked for Western Express for 16 months. I did really well there.

Now, let's talk about those really unnerving reviews. I was literally frightened to go there. The reviews would haunt my dreams at night. It sounded as if the devil himself was running that company. It didn't take me long to understand why the reviews were so bad, and I'm hoping you can understand my explanation and also take hope from it.

Western Express has lower standards for hiring than many of the other large trucking companies. That's not necessarily a bad thing. It gives people like me, you, and Victor a chance when we're being denied everywhere else. It also gives a lot of people who really don't deserve the privilege of having this great responsibility a chance at establishing a trucking career.

Listen to my personal experience, and then I'll explain those crazily negative reviews. We had approximately 150 people in my orientation group. By day 3 we were down to about 50. That many people got axed for things like failed drug tests, lying on their applications, and trying to conceal bad criminal records. Sounds like we were a stellar bunch of characters doesn't it?

By the beginning of the next week we were ready to go out with our trainers and we were down again to about 20 potential new drivers for the company. Most of that was due to bad attitudes, arrogance, and an inability to pass simple tests we were taking to verify that we were at least paying attention in orientation. I had made several friends in that core group and had there phone numbers. I tried calling them two weeks into training. Guess what? Each of them had already quit.

Trucking is an extraordinary job that requires extraordinary people. They were giving a chance to a lot of people who don't fit in that category. I never experienced any of the problems that you mentioned in your post that you've read about Western Express. I didn't have the most stellar trainer, but I seriously wanted a trucking career, so I endured the unpleasant parts that I knew could get me where I wanted. As I came to later find out, only two of that original group of 150 people stayed with the company for one year. Myself and another fellow.

Now, how many of the losers who either quit or got sent home went online to write reviews? I have no way of knowing, but I do know that the reviews are so over the top bad that they have been authored by people seeking revenge for their own shortcomings.

I always had great equipment and tons of work. I had an excellent dispatcher fot my first year or so, and then he left. My next one and I just didn't click so well, but he never failed to keep me busy. I had one experience where my pay was wrong, but one simple phone call to payroll had it rectified on the next week's payroll. It turned out I had made a mistake on my paperwork I scanned in. It wasn't because the company was trying to cheat me.

Anytime I read online trucking reviews now I see them as a report on the drivers who author them. They are not prepared for the effort required to make it in this business and they got into trucking with false expectations. In reality only a small number of folks who attempt this career go on to having professional productive careers at it. This is a most rewarding adventure for some, but it takes special people to succeed at it.

There are a lot of trucking reviews penned by people who will never be successful at this. They simply don't have what it takes. Unfortunately they take no responsiblity for their shortcomings and failures. They spend their lives blaming others. Frankly, it gives them a twisted sense of worth. It's really sad when all a person can produce is lies and innuendo.

I hope you have the grit to jump in here and make a career of this. You'll never do it by trusting online reviews. There's one thing you can trust to help you make progress in trucking. That one thing is your own determination to make it. That will see you through. Without that you'll fall prey to the lies and discouragement. You are the determining factor. You're the one holding the wheel. Drive your career into a bright future. 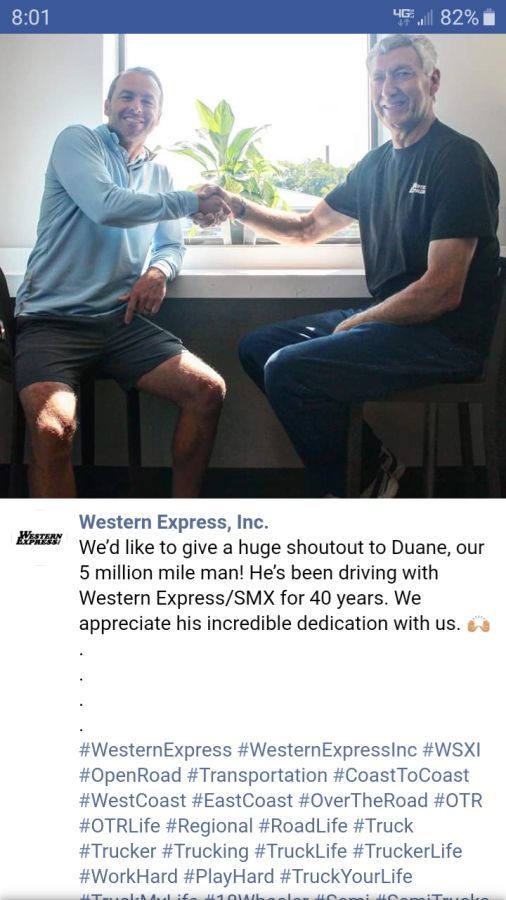 if Western Express is so bad this guy wouldn't stay so long. With that record he could get probably a job with ANY company he wanted and yet he chooses to stay at Western Express. we understand negative reviews are rampant online, we all remember doubting our choice of company due to those. The truth is a driver can be successful at any company if they take the time to learn things work at that company, and are always striving to get better.

Stephen I hope you are still hangin'-in-there with us...

If we collectively believed all of the head-trash and cyber negativity found on the internet, none of us would have ever become truck drivers...and I doubt I'd be driving (after 6+ years) for SWIFT. Yes...I said SWIFT. The information Rob posted about the Western Express 5-million miler is significant. All of the companies represented in this link - Paid CDL Training Programs have similar examples of drivers with millions of miles in the seat.

Victor is a really good example for you to follow...his determination is without question. Now,... all he needs to do is execute, and he will. "Watch him"...this could be you...