Leaving Security For Trucking. Why? I'll Tell Ya!

My dad had a train wrecking company in the 70's and had a purple and white Peterbilt, single cab, and a GMC gas powered big truck that hauled a small lowboy. It seemed so cool to see him driving off to a job. But he went bankrupt and we moved on.

Fast forward to a life after being in the flooring business from 1992-2012 and then again from 2015-to now. 2012-2015 I went around North America estimating hail damage to cars and setting up Paintless Dent Repairs.

I hated the flooring business when I left, the first time and never wanted to get back in it but an opportunity to buy the old store I worked at came up and even though I begged my wife not to make me get back in it, you guys know, happy wife happy life blah blah blah.

I had two sons from a previous relationship and when I married my now ex wife, my ex ran off with my kids and it took months to track them down, once I did, I was awarded full custody.

Once my ex wife and I decided to get divorced, I not only gave her the store, I ate over 35k in debt, gave her additional money on the sale of our house, etc, I went to work for good people in Waco. It's a well paying job, I'm home every night(when I'm not delivering pizza for Domino's, trying to get my divorce attorneys paid off because my ex is fighting to keep me from ever seeing the kids even though there's absolutely no reasons other than she just hates me).

Both times my kids were used against me as a weapon, I had been employed at or owned the business and I just got so sick of it I walked out in Dec of 2018 and will never go back in it or even near it.

In January of this year, I had an adverse reaction to an antibiotic that inflamed my liver, making me yellow, sick, itchy(jaundiced) and a transplant was discussed.

At that time, I realized I wasn't happy with my life. I hate flooring, the customers, the installers, the distributors, you name it, I hate it.

I met a young man in the park who had a dog and my daughters were playing with it and he mentioned he was going to truck driving school after discharging from the Army, and it just hit me like a hammer.

I am kind of a loner, I am autonomous to a fault, I love new experiences and I don't get scared or nervous about new things, even at the age of 52, I still want challenges. I love driving, driven car haulers, moving trucks across the country, etc. and I have NO intention of ever getting re-married, once was enough.

So I immediately started doing research and came across this site, which has been a treasure trove of information. I wanted flatbed, at first, and TMC seemed great and they were interested, but then, all of a sudden, decided not to pursue it any further so I went back to the drawing board and found a few others that have mostly good recommendations and narrowed my choice to Millis and was accepted, I saved money on the tuition because I am an honorably discharged former member of the Army.

They seem like getting home two weekends a month won't be a problem so I can see my young daughters on my weekends with them and they seem like the company that as long as I pay my dues and treat them with respect, loyalty, and dedication to go with a positive attitude, that they'll treat me with similar respect. Maybe in a few years I'll look for something regional or dedicated, once I understand the business in a few years.

In February I was sick, worried about my health, and not happy with my life and had no thoughts about being a truck driver.

Five months later I am healed, refreshed, and excited to become a truck driver, hopefully until I retire.

The thought of taking my daughters on the road with me, when they get old enough, makes me smile at the memories we will make. Waking up in one state and ending the day in a different state while trying to get to my destination on time, that excites me.

And hopefully I don't fail school and end up flipping burgers at McDonald's.

I think you are going to love this lifestyle Mike. It's super easy to get discouraged at the beginning. Don't let it get to you. We know all about the challenges and the rollercoaster emotions. Stay in touch with us and we will help you as we can. That's what we do here. We lend a hand to newbies.

This career is challenging. It's especially daunting at the beginning. We've been there and overcame it. You can too. We are always willing to help.

Definitely appreciated. I was in the Army, married, raised by psychopaths, so I don't get my feelings hurt or get mad at words or instruction. Don't want to get too ****y because that's when bad things happen but "stress", other than when it comes to issues regarding my children, doesn't really happen to me. A million other things might but I, fortunately, don't have an ego and can take instruction and I admit being wrong when I'm wrong, and sometimes even when I'm not.

Reading from people who don't get negative and have *****fests has been more than helpful. Other groups or forums are teeming with negativity and insults. No one has time for that.

I think you are going to love this lifestyle Mike. It's super easy to get discouraged at the beginning. Don't let it get to you. We know all about the challenges and the rollercoaster emotions. Stay in touch with us and we will help you as we can. That's what we do here. We lend a hand to newbies.

This career is challenging. It's especially daunting at the beginning. We've been there and overcame it. You can too. We are always willing to help.

The primary person a driver communicates with at his/her company. A dispatcher can play many roles, depending on the company's structure. Dispatchers may assign freight, file requests for home time, relay messages between the driver and management, inform customer service of any delays, change appointment times, and report information to the load planners.
Pete E Pothole's Comment 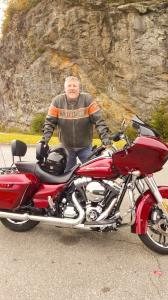 When do you start?

When do you start?