I wouldn’t need a ten I’d just run. With the new rules your clock pauses after being off for 2 hours straight.

Throw some sleeper into the mix and your running like an outlaw from back in the paper log days.

This is the reason a lot of companies don't like using the split sleeper rule - even with ELD's it can get confusing. Which is why most folks only use it (under the new rules) to pause the 14 hour clock - and still take a 10 to reset both.

I'd do the latter - you don't make $$ when you're shut down - and if you have 6 hours left to drive - might as well use them and make the $$ (and get in position for your next pickup/delivery). He didn't say his stop was a multi-stop, or if he had a pre-plan for his next load. Since he dropped at a DC, he might have a load going out of that same DC (in which case, depending on appt time - going to the TS and completing the break would be the smarter move).

What he does NEXT - depends greatly on WHAT HE'S DOING NEXT (and he left that part out). I'd be hauling my ass to the next stop, and not wasting a day sitting at a TS to finish the break.

The change in split sleeper, made it less confusing by giving you a 7/3 or 8/2 option and pausing the 14. Versus re-calculating - which made it all the more confusing for people - even some ELD's freak out a little trying to do splits UNTIL YOU FINISH THE SPLIT. 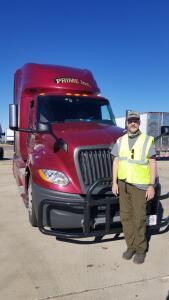 Butch is very thankful for all of your responses. He is still trying to understand the best way to do things, and hopes within a week or so to be making decisions on his own so that he does not end up in these challenging predicaments.

According to.the FMCSA website it is NOT a violation to use PC after getting LOADED in order to park at a reasonable distance with adequate parking. It specifically says in #3. "After loading or unloading" this was part of the 2019 change. It also does not specifically say you must be out of hours.... Just relieved from duty. Which if you are going to park, would be true. Then the argument would be that you were doing work during the BOL check out and closing doors, macros and sliding tandems.

Now what FMCSA allows and what your company allows would be 2 different things. Some people would argue the 5 hour in the dock then driving then parking for 10 hours is a waste of 5 hours. I can do 300+ miles in 5 hours..... Close to $175. We all know people who do this.

I was questioned about PC once during an inspection. A truck next to me hit another at a truck stop. It was easier for me to move and get out of the way. He saw I didn't go far, it was only a couple minutes in a truck stop. In this type of situation putting "repositioning vehicle" in the remarks can be helpful.

The primary person a driver communicates with at his/her company. A dispatcher can play many roles, depending on the company's structure. Dispatchers may assign freight, file requests for home time, relay messages between the driver and management, inform customer service of any delays, change appointment times, and report information to the load planners.
Barry H.'s Comment

Thank you Rake for bringing this topic up for discussion, much good feedback and things to ponder. 🤔🤔 I need to study the new HOS updates to expand my knowledge it appears, I'm not up to speed on the use of PC and it's requirements .. Safe Travels Sir 👍

Thank you Rake for bringing this topic up for discussion, much good feedback and things to ponder. 🤔🤔 I need to study the new HOS updates to expand my knowledge it appears, I'm not up to speed on the use of PC and it's requirements .. Safe Travels Sir 👍

Splits are probably the most confusing part of HOS (next to RECAPS).

I would think most companies should (that allow the split) "should" have their ELD's programmed for it...