Trying to get him to come aboard. I did just find out he ditched on Prime after only 8 mos. Went thru their training etc. His words "Not worried about owing them, its been 2 weeks and havent heard anything!" Oh boy! Hes going to be in for a surprise or two.

G'Town, Navy, thank you ALL so much; I'm still 'diggin' the 'gig' tho, G'Town! Tom doesn't really remember a whole lot from the 'slinger' days; he was with his brother, not really holding a permit, either....hehehe. (Hay, even Brett did rogue stuff, back in the day, right?)

I really DO believe you've found your niche, good sir. A thread on this, sure WOULD be awesome; many people have no idea what goes into operating anything moving, besides the T/T itself. Had I not run tanks with Tom, I'd have no clue what a PTO even is! I like that yours has the hi/lo range, G. Some of the 'older' tanks/Petes we used to pull, did not. I'm still not sure HOW that one guy burnt his up, to be honest....but as Navy mentioned, there sure WAS some red fluid blew out, and then....nothing! I'm still learning.

I appreciate the education within these walls, guys & gals. More than you know. Assuredly, so do many. I can't even COUNT the people I come across, that are 'read only' mode here, as they mete out the hours of their lives, and their current careers.

Sometimes it's better to jump in with both feet, as YOU have, G'! You've got more experience than Tom, in 1/2 the time driving, haha! Learn is as learn does!

Best to y'all guys!~

I have known this guy for about 8 years or so. He might be 30 now. His parents have always taken care of him. Nice guy but I was shocked he started driving. Hes delivering beer right now. Looking at Sheetz and pfg. Hmmm

Thanks for the the reply Anne and Tom.

PTO has two settings, high pressure for the walking floor and a low pressure setting for the lowboy (more on that later). The RPMs when the PTO is in are governed at about 900. The throttle is basically disabled while it’s on.

No idea whether this is similar to the slinger Tom ran.

Yes, it unloads in 10 minutes or so...depending on the material and moisture content.

I’ll try to get some decent pics this week.

A walking floor is an open top trailer with aluminum slats instead of a solid floor. It is operated off of a PTO from the cab and hydraulic fluid. When engaged the slats next to each other move in the opposite directions like one of those exercise machines mimicking skiing. It slowly moves the bulk product out the rear door of the trailer. I operated one with a company moving wood mulch and they are known for leaks in the hydraulic system because of the pressure involved. Hope that helps.

G'Town, this is totally fascinating! I understand the 'workings' of a PTO due to pulling tanks with Tom; however . . . 'he' has a question for you: If you try to run the 'floor' too fast (as one of his co workers did with the PTO on an asphalt tank) can you burn UP the PTO/hydraulics, or does it have a rev limiter or something of that nature? Back in 2015, Tom (we) had to meet that guy in Newark (OH) and pump off ALL the 6122 asphalt, and carry on, to the 90. (Final destination, haha!) Needless to say, we were on paper, and I had a CDLP.

Next question; is it similar (at all) to a 'slinger?' Tom pulled one 'way back' with his brother at Kokosing, as a favor; it was almost a V'shaped 'hull' trailer; with some sort of augers/rubber moving parts (unlike your S/S) pushing the product (a gravel mix) out the back. Not really sure if it was PTO operated, or electric, or . . . gear driven? Tom was pre CDL at the time, haha! Yeah, I know .. (shhh... 90's!)

I'm still hoping you'll start a thread on this, as you can. We'll have to get Brett to add a 'tag' for PTO instead of just lumping into 'truck equipment.' The physics of this stuff amazes me; as did dollies and pintle hooks. Sadly, I'm a sponge . . .even for something I'll never need to know, haha!

Always in your gratitude,

G'Town! Tom got BEHIND a 'slinger' today!! He was in the PV; no bulldog on the hood, lol! There's a pic in the 'postcards' thread; and here's the rear end; with a tail light out, haha! He doesn't really remember much.. being back in '80's etc... some rubber/auger stuff, moved the product. I LOVE this stuff!!

Waiting on YOUR thread, on PTO's! 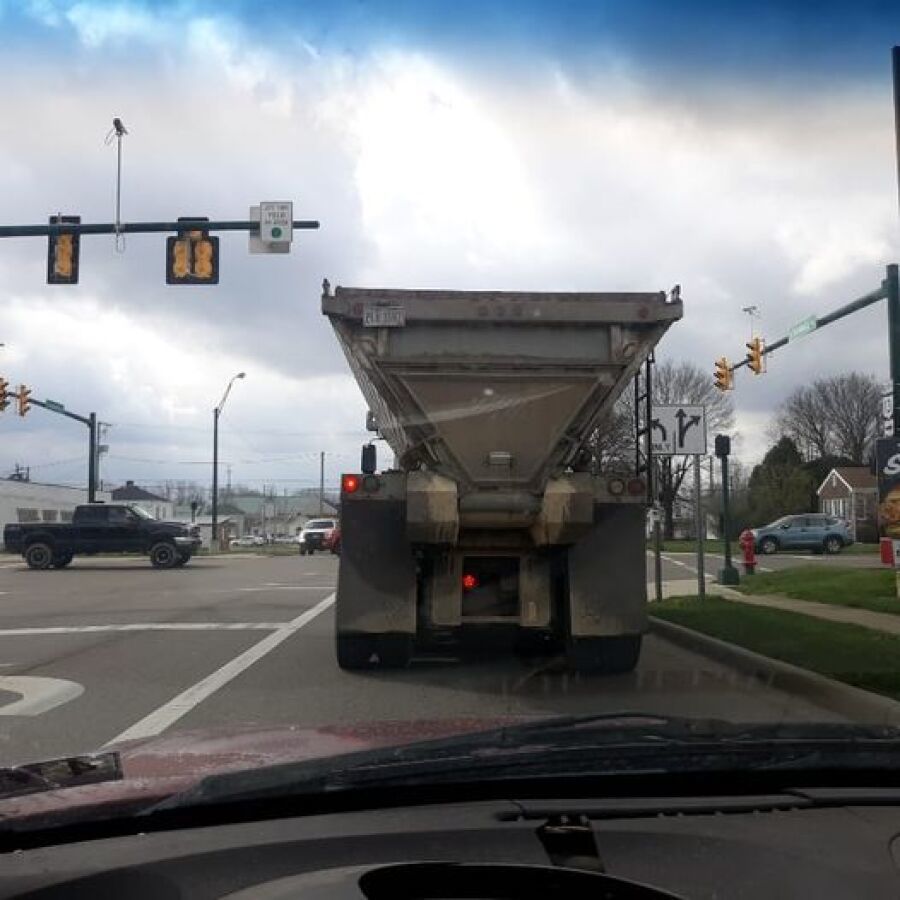 I have known this guy for about 8 years or so. He might be 30 now. His parents have always taken care of him. Nice guy but I was shocked he started driving. Hes delivering beer right now. Looking at Sheetz and pfg. Hmmm

Changing Careers Choosing A Trucking Company Doubles and Triples Linehaul LTL Driving Photos Trailers Truck Equipment
Click on any of the buttons above to view topics with that tag, or you can view a list of all forum tags here.