Mom Killed After Car Collides With Tractor Trailer In Chattanooga

Mom killed after car collides with tractor trailer in Chattanooga 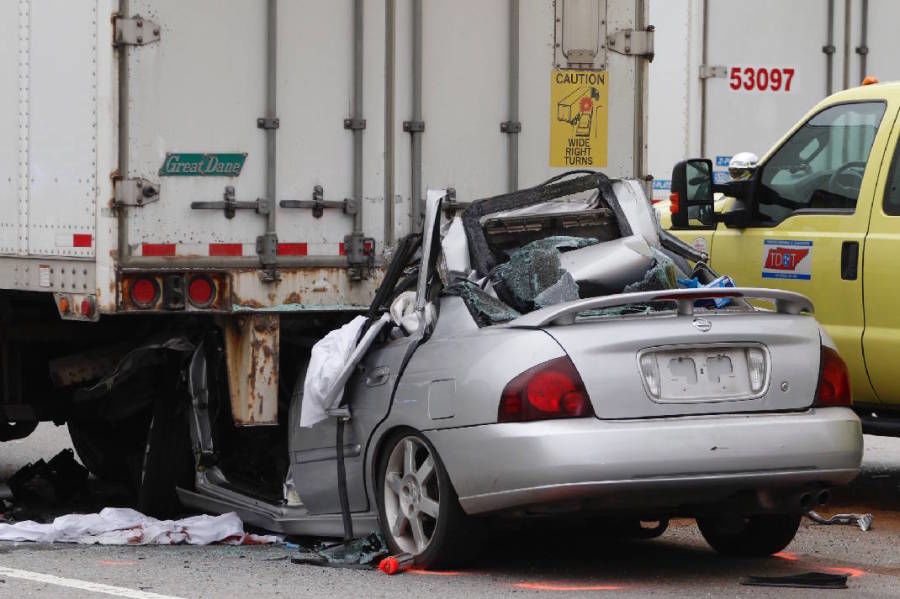 One woman died in a wreck between a car and a tractor trailer on I-24 today, according to Chattanooga police.

The wreck happened across from Moccasin Bend, near mile marker 178 at about 9:20 a.m. and shut down the interstate for several hours.

Police identified the woman as 27-year-old Cassandra A. Mason. Authorities say three children in the back seat were taken to a hospital but none of them were seriously injured.

Witnesses told police that Mason's vehicle slammed into a stopped tractor-trailer at close to 70 miles per hour. The tractor trailer was reportedly at a standstill behind other stopped traffic. One witness said Mason did not decrease her speed before the crash.

Mason was pronounced dead at the scene. She is the mother of two of the children, police said; one child was the son of the victim's boyfriend. The father of the other two children is reportedly on the way from Nebraska to take custody of his children.

An investigation is ongoing.

The picture alone should bring you back to reality. Accidents occur like this far to often because of both tractor trailers and four wheelers. PAY ATTENTION!

One "Best Practice" is that even you see your lane up ahead is slowly down/stopping quickly, turn on your four-way flashers ASAP.

Something tells me even the 4-ways would not have alerted this lady to the stopped traffic ahead of her. If she didn't even slow down, she must not have seen anything. So tragic for those kids.

This is so sad man. I feel so sad for those babies. When I saw this I just broke down crying. It is never a good thing when someone loses they're life so tragically. My heart goes out to the family.

Whoaaa ! that sucks ! luckily the 3 kids weren't killed too! wow look how deep she plowed under there yikes!..........Check the cell phone! texting? or just distracted, maybe by turning to kids? probably never know really. Sad whatever caused her to not even slow down.... RIP Miss Mason

I have found this out: just driving on the interstate (daytime when brake lights aren't so bright) if your lane slows quickly it'll come up on you too fast.

Sure mom might have been distracted, even to turn back with "If you kids don't quiet down now ...!", it only takes 1-2 seconds of distraction to kill someone this way.

Thought game - it's happened to you: you're approaching an intersection, you have a green light so you're going to go in. You look at your speedometer (1/2 second) and you look up to see a YELLOW light. Reaction question: just when did it go yellow? Now you don't know if you have time to enter before orange turns red, and it would be almost a panic stop if you decide to stop instead.

That's not true at all. That's ridiculous in fact. Cars are far safer than they've ever been. They're designed to crumple up like that to absorb the energy of the impact instead of transferring it to the driver. And of course airbags have saved countless lives.

It looks to me like the DOT bumper failed on that trailer. Obviously the point of having that DOT bumper is to keep the car from going under the trailer like that.

Hard Lessons Learned Truck Equipment Trucker's Family Matters Trucking Accidents
Click on any of the buttons above to view topics with that tag, or you can view a list of all forum tags here.