What Is The Reason For Changing Gears In Vehicles?

I mean what does it do exactly? To me seems like it's putting a vehicle in new "gears" so it can handle itself at higher or lower speeds? But what exactly does this? Can someone explain it to me? What's the purpose? Never driven a manual before ever and I'm going to have to learn at school to past tests..

Let me see if I can explain this in layman's terms.

Have you ever wondered how the Seattle Space Needle dining room revolves? Think of the dining room floor having gear teeth all around it. In order to move that gear you need a lot of force or torque. But how do they move it with such small motors under the floor? The answer is gear ratio. When we talk about trucks we normally hear about 4.11 or 3.55 or 2.38 gear ratios and such. What they are talking about there is the gear ratio in the rear ends. What it means is that the driveline in say a 3.55 gear ratio will make 3.55 revolutions for every one revolution of the tire. The same thing happens in the transmission where a small gear is used to turn a larger gear.

The limiting factor is the RPM limit of your engine. The larger the ratio the easier it is to get something to move. So with a heavy load it is easier to get a truck with 4.11 gears to start rolling than it is a truck with 3.55 or 2.38. With each gear shift the ratio in the transmission changes closer to a 1 to 1 ratio. We have to do this because of the RPM limit on the motor. You can only go so high before you lose torque and eventually the motor itself.

I know it is clear as mud but basically you must shift to protect the motor in order to go faster and slower.

When you shift gears in the transmission you are basically engaging a larger gear and disengaging the smaller one. There are also things about compounding gears but we will keep it simple. 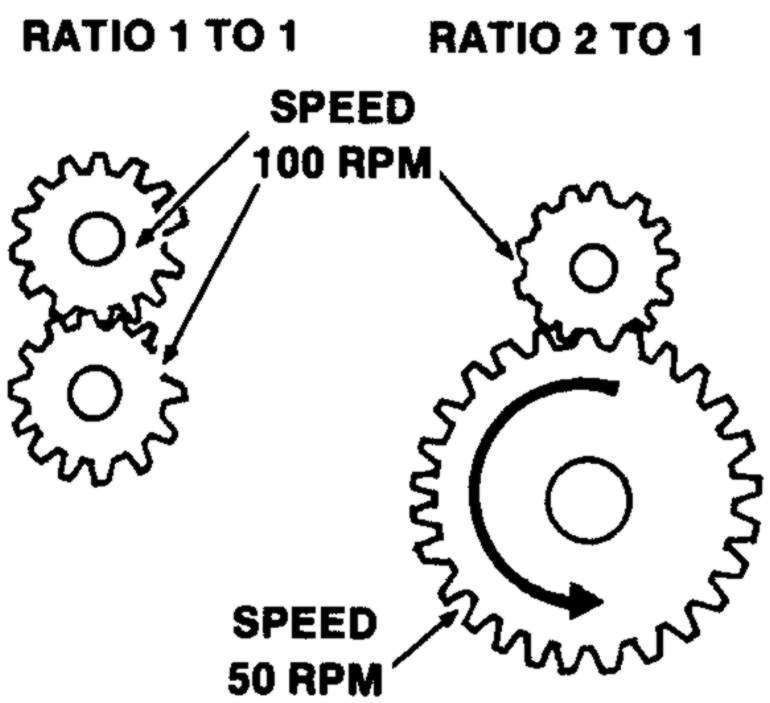 I actually saw this one when it was first posted and started to take a stab at it, and then I said to myself, "I'll bet Pat will jump in here and explain this one if i wait long enough for him to see it." And sure enough, you got in here and did a really fine job of it, and did it in about a third of the space it would have taken me to do it!

Another way of thinking about it is that every engine has what is referred to as a power band. The power band is the RPM range in which the engine makes good power. For a big rig diesel engine the power band is roughly 1,000 - 1,800 RPM or so. It varies between motors and manufacturers. In contrast, a NASCAR race engine has its power band around 6,000-9,500 rpm.

When a vehicle is first designed they take into consideration things like the weight of the vehicle, the engine's power band, and the job the vehicle has to do in order to determine how to setup the gearing. Is the vehicle heavy or light? Does it need to accelerate as quickly as possible or get great fuel mileage while cruising at a steady speed? Are you going to be pulling a lot of weight up giant mountains or are you going to accelerate a light load quickly for five seconds on flat ground? A long list of variables go into determining how many gears a vehicle will have and what the gear ratios will be.

The reason a big rig has so many gears is because the engine has a very narrow power band. You'll mostly be operating between 1,100-1,600 RPM. That's an incredibly narrow range. Therefore you'll accelerate or decelerate for a very short time before you hit the end of the RPM band and have to shift to another gear. So in order to give a big rig the ability to pull heavy loads from a stop but then cruise comfortably at Interstate speeds while still staying in that very small power band you need a lot of gears.

How do you get from the first floor of a building to the second floor? Can you just step one step with your legs? No, no one's legs are long enough to do that.

Use the stairs. One step at a time, for maybe 15 steps, and you'll get there. Your legs can handle the little steps easy, but it's impossible to go from the first floor to the second in one step.

How do you lift up a car to change a flat tire? Can you or your dad just grab the bumper and lift it up? No you're not strong enough to do that, (except for some Fiats.)

But when you use a jack, how does that work? You push a handle up and down, up and down, and the car gets lifted higher!

The jack takes your arm's weaker up and down motion and changes it to a small but strong lifting motion.

So there are no fairies and pixie dust in the engine. Man, I need to go back to studying "High Road."

It's the same as a bicycle. The high gear makes you go faster but it's really hard to pedal when you're starting from a stop. Low gear is easy but you have to pedal like crazy to go fast. So you start in low and shift to high once you get going.

Ok let me take stab at this:

You know all those giant wind turbines you see everywhere nowadays? Well I literally know nothing about how they're designed or engineered, but I can take a guess: they must use gears.

A generator has to run at high speed to generate any decent amount of current. If the generator in those wind turbines turned as slowly as the blades did, they would be a colossal waste of time and money.

So I can only assume there is some sort of gear system between the blades and the generator. This makes it so that for every rotation of the blades, you get many more revolutions in the generator.

I'm sure somewhere deep inside there, while the blades do their slow dance in the sky, the generator is happily whizzing away at thousands of RPMs.

Think of it this way: imagine you place two quarters on a table side by side so their edges are touching. Now imagine that they're interlocked like gears. As you rotate one, the other rotates in the opposite direction. Since they're the same size, they both rotate at the exact same speed, so for every 1 revolution of the first quarter, you get 1 revolution of the second quarter. This would be a 1:1 gear ratio.

Now imagine you use a penny and a half dollar. Same rules, they're interlocked together. This time, if you rotate the half dollar, the penny actually rotates much quicker. Because the penny has a smaller circumference, it will actually finish its first rotation well before the half dollar does. So for every 1 revolution of the half dollar, you might get 2 or 3 revolutions of the penny. This would be like a 2:1 or 3:1 great ratio.

So in the wind turbines and your diesel engine, it's a little more complex, but the same principles apply. If the engine and the drive tires were locked together in a 1:1 ratio, then the faster you go (faster wheel rotation), the faster the engine would have to "rotate" to keep up (higher RPMs). Eventually you would either have to stop accelerating or blow your engine to pieces.

To fix this (and allow you to go faster), the gears act like different sized "coins" between the engine and the tires. As you shift up, you're placing smaller and smaller gears "next to" the half dollar which is your engine, so that you get more and more tire rotations for each revolution of the engine. This allows you to keep the engine in an optimal RPM range while still gaining speed! Yay!

I mean what does it do exactly? To me seems like it's putting a vehicle in new "gears" so it can handle itself at higher or lower speeds? But what exactly does this? Can someone explain it to me? What's the purpose? Never driven a manual before ever and I'm going to have to learn at school to past tests..

Simply put changing gears allows the vehicle to go faster than it could go if it had only one gear. Like a 10 speed bike.