Kingpin Jumps Over The Fifth Wheel! Oh My!

Sometime or other, you'll want to hook into a trailer that is actually set too high on its landing gear and you're stuck with the kingpin on the wrong side of the fifth wheel.

The fifth wheel automatically tilts towards the back, and that doesn't help you any just now. You could slowly grind the landing gear up until the k.p. clears the fifth wheel. And your arms and back are wore out.

Here's a method to tilt the fifth wheel forward, and maybe make your life a bit easier.

Get something to jam in under the fifth wheel. I think the best tool to do that with is a big ball pein ("ball peen") hammer. You can use it mostly for bumping tires and breaking ice off the steps. But here's where it comes into its own.

Look at this photo: 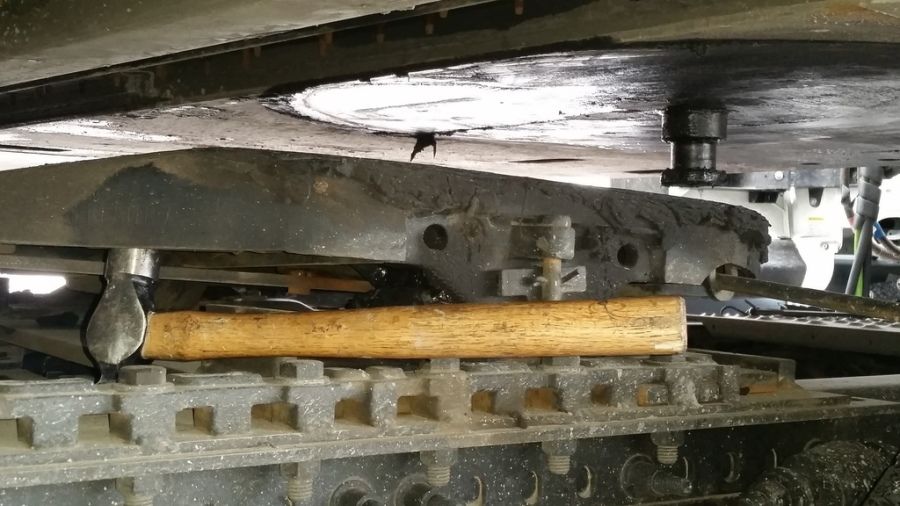 You can see the kingpin straight up from the right end of the hammer. You might need both hands. Manually tilt the fifth wheel forward with your left hand, and set the hammer in to hold the plate up.

It's important to put the "ball" end down on the frame and the "hammer" end up under the plate. When you pull the tractor out, there may be too much weight on the plate, and the ball pein hammer will simply pop out when the kingpin gets over it. No other tool will work like this. An empty tin can (not a soda can) could work.

The fifth wheel is now tilted so the k.p. should move smoothly back to where it should be.

You'll get used to seeing the height in the mirror. Make a fist. It's about that much between the tire and the trailer apron.

Just remember it only takes less than 1/8" to mess up your day!

Go ahead - say this will never happen to you. Dare ya!

Yup, got to agree EVERY time I get out and check

Of course then I do a pre-trip (complete) EVERY day too. I don't see many hoods ever opened in the morning at truck stops...lot of lazy drivers out there.

Wouldn't you "typically" want the apron to hit about a 3rd of the way on the plate?

You're supposed to LIFT UP the trailer when you couple.

I've seen a couple of folks "high hook" a kingpin.

You could also dump your air bag suspension (if that's an option) and get the 5th wheel low enough to pull forward under the pin.

What you say is right. But sometimes the Moon's not in the seventh house, and Jupiter doesn't align with Mars.

I did this my first week out and was like "uh oh.. what now" hahah learned this one real fast. However I also know someone who crushed their cab when they went back too hard! Yikes

What you say is right. But sometimes the Moon's not in the seventh house, and Jupiter doesn't align with Mars.

...and peace will not guide the planets?

...and love will not steer the stars?

Word is that Schneider will fire you for that. I think the reason is that part of the coupling procedure is to get out and check the height first, so if you high hook you weren't following the procedure. Years ago they had a trailer come unhooked on the road and kill someone, so now they are very serious about it.