Do Any Of You Go Geocaching?

It sounds a lot like playing Pokémon Go I think it is called. It was big for a short time my kids played and were going around looking for Pokémon but it died out like all other games when the next new game came along.

People with too much time are still playing that Pokemon game.

In front of my house at The Beach is a spot to capture? one. People stop there 24/7. Drives me nuts! I'd like to shoot whoever's was behind it.

Typically I'll devote about an hour every day to brisk exercise, and that sometimes involves looking for and hiking to a cache.

Do you still Geocache out on the road?

Also, how often are you able to find a rest area or other truck parking near a trail head?

In doing some of my "pretend" trip planning I found several rest areas in Colorado that either have walking paths at the rest area or have a trail head within walking distance.

See the picture below from the CDOT Rifle Rest Area off of I-70, mile marker 90 just east of Grand Junction. 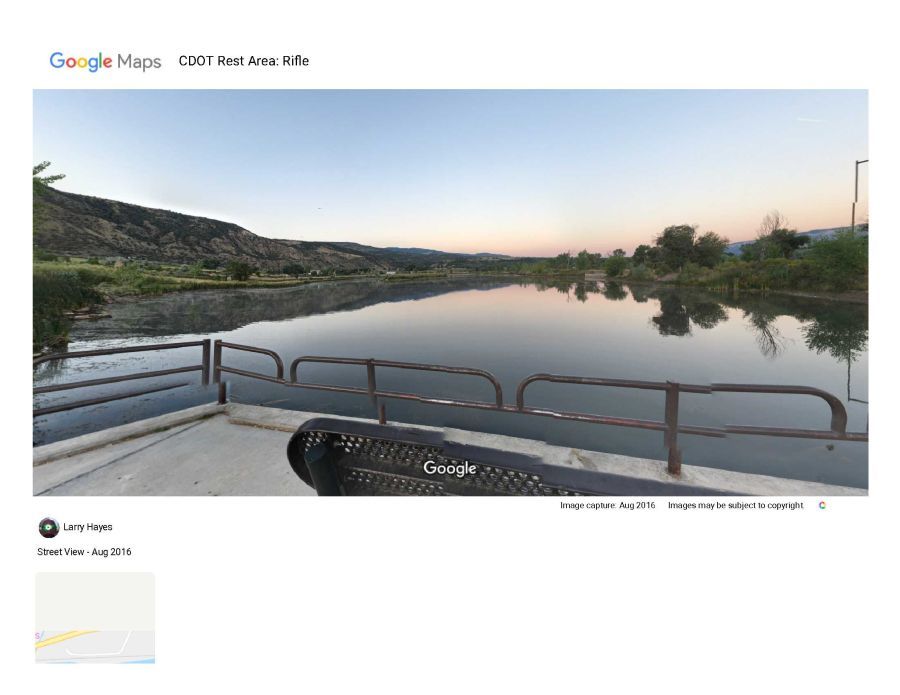 That Pokemon craze was nuts. The amount of money that the developer made from that app was serious money. When my daughter was younger she was in a park helping a couple of senior citizens figure it out. It was hilarious watching them use that iPad to try and catch whatever.

I did a few geocaches. Used the GPS on my iPhone to locate the box. I would love to see that done with maps and coordinates. Kids today are lost if the GPS goes out. When I was in the US Army, we did a form of geocaching. They didn't call it that, and they didn't give us a choice in it. We were sent out with a map, compass, and watch, with instructions to find what was at certain coordinates. Oh, those happy days. The last coordinates at the map reading course at Ft Dix was the AAFES Specialty House. (Think fast food restaurant / beer establishment)

Personally, I've never done the Pokémon thing, but I don't think geocaching is at all like it. The adventure, exercise, destination, and stealth involved in locating a cache is the real "prize". Signing the cache log, or collecting the "finds" is secondary.

Do you still Geocache out on the road?

Also, how often are you able to find a rest area or other truck parking near a trail head?

Yup I geocache quite a bit out there. Most of the time, I simply use a cache as a destination mid-way in a brisk walk at the end of a shift. Often there is a cache nearby, no matter where I stop. I can be out in the boonies, or near a major city, and I'll have one within a mile or so. Download the free geocaching app, and you'll see what I mean. There are likely many near you right now. Your area is more urban, so stealth will be paramount, lest unknowing passersby muggle the cache.

As for trailheads, finding one near a truck stop is hit or miss. I do use an app called AllTrails to find any that are near me. It's usually easier finding a trailhead near a rest area than a truck stop. Most often I just pick a direction and start walking. After following a planned route every day of my career, it's nice to wander aimlessly sometimes.

I have been geocaching for quite a while (about 10 years). While I was on the road, I was able to grab geocaches while at rest areas, truck stops, and customers (both shippers and receivers). They are everywhere and nowhere. It seems like when they are there, there are quiet a few, then once they are all found, then there are very few that are truck friendly or accessible.

And it is very addicting. Happy caching... Chris

Found one right next to where I park.

Anne A. (and sometimes Tom)
Lexington, OH
Considering A Career
Posts: 5511
Joined Us:
5 years ago
484 Photos

Found one right next to where I park.

Is that the one where Turtle said, you "marked your territory?!?"

Good thread, good clean (physical!) fun.. Raise it up, y'all!

I'm still geocaching, just not as much. Turtle and I have had some challenges in the past, which we need to do again.

Whenever, I go to New York, I make sure to find and log geocaches, especially if they are close to where Turtle runs, as a way to "pee" on his territory. The best are Walmarts. I stayed the night at a Walmart on Long Island so had to find at least one geocache.

Anne A. (and sometimes Tom)
Lexington, OH
Considering A Career
Posts: 5511
Joined Us:
5 years ago
484 Photos

I'm still geocaching, just not as much. Turtle and I have had some challenges in the past, which we need to do again.

Whenever, I go to New York, I make sure to find and log geocaches, especially if they are close to where Turtle runs, as a way to "pee" on his territory. The best are Walmarts. I stayed the night at a Walmart on Long Island so had to find at least one geocache.

So TOTALLY awesome; what a healthy and adventurous way to 'interact' out there, on the road. Love it. Thanks!

More drivers should do this, imho! I sure would / will !!! Wonder if there's a driver's group, of sorts, relative to??? 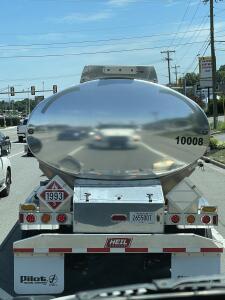 More drivers should do this, imho! I sure would / will !!! Wonder if there's a driver's group, of sorts, relative to???

There used to be a website dedicated to geocaching truckers and RV’ers. It had tons of caches that were truck and RV friendly. I’ve got a geocoin from that website, I’ll have to dig it out and find out what it was. It’s been shut down for years which is a shame. When I was OTR , I’d stop at the truck stops for fuel and food if I needed it and then head to the nearest rest area if I could in my direction of travel. I’d park for the night and more often than not, there would be a cache there. I added many states to finds list that way.

Entertainment Exercise and Fitness Home Time Life On The Road Truck Driving Lifestyle Truck Stops
Click on any of the buttons above to view topics with that tag, or you can view a list of all forum tags here.