Asked To Leave The Facility 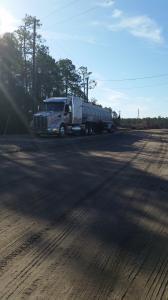 Edward R.
Morton but wish I were in Tennessee, MS
Experienced Driver
Posts: 3
Joined Us:
4 years, 1 month ago

Well, it finally happened. After 31 years in the business I have been asked to leave a facility... Even though I have no hours to do so.

After arriving at Ingevity in North Charleston SC and being held up for 5 hours before unloading, I ran out of hours to drive. Soooooooo, I only needed about 2.5 hours to complete an 8 hour break, huge parking lot I figured I would be ok. Wrong. The traffic supervisor informed me that I "should have left earlier that way I would have the hours to leave". I told her that I had 5 hours to drive and 5.5 hours on my 14 upon arriving at their facility and that was burned up after they took 5.5 hours to get me unloaded, also informed her that I did "leave early". So I'm sitting on the side of the road outside the plant until I gain the hours to roll on.

I understand the "safe Haven" rule, I also understand that it's a judgement call for LEO's and God forbid anything should happen, a godsend for any lawyer/attorney. So here I sit, waiting, with the knowledge that they ordered the product and I delivered it on time and I was very patient while they took 5.5 hours to unload. Never once did I go full trucker,31 years, almost 3 million miles, never been asked to leave a site before.

I don't blame the E-logs, nor do I blame dispatch,I gave myself plenty of time, got here safely, had hours, I blame the tinfoil hat wearing lobbyist in Washington and the folks that came up with the technology to create these situations. I blame the sales person that sold companies on the idea that this (ELOGS and Dashcams) would protect their interest(money). I blame the insurance companies for giving in and settling lawsuits and not standing up for us, I blame the trucking industry in whole for believing it would be better to pay off the DRUNK SOB that hit the truck rather bringing a counter suit. Yep, we've done this to ourselves.

The people in Washington and the liberal left want the U.S. trucking industry to more like the European countries. They think we should be fit and polished and only work 8-5 Monday thru Friday..... I've ranted enough. Truckin'up. Thanks for reading, Mr.Ed and I'm going back quiet.

I'm not sure how you made it 31 years and this being a new experience for you. I'm on my 3rd year and have been chased outta more places than lot lizards.

Im curious as to his understanding of the safe haven rule. is this a hazmat load?

If you start delivering to grocery warehouses this will be something you deal with. It really is just a product of running hard and scheduling tight and a lack of space.

Even if you do have hours but like in Edwards case have sat for 5+hrs sometimes it's worth it to but heads with a security guard.. 3 more hours on top of the 5 he sat for and he could legally roll.

Security is not the top of the food chain and I'm not condoning an argument with them however sometimes you can see this coming and make a call to the office of your company and let someone on that end try and deal with it. Or when you get loaded/unloaded go back into the office and see what they say.

Since I've started pulling tankers I've not had this particular issue. But Ive delt with security guards.. Recently I delivered a load of Palm oil to a chocolate place in TX.

Sop for alot of places is to weigh loaded on the way in and weigh it empty on the way out.

I pulled into the scale and a little while later a guy wearing white overalls comes out to check me in. That's weird because at chocolate places those in white are the ones that unload and usually a security guard checks you in.. No big deal cause I've never been to this place so what do I know?

Get weighed and backed into where I'll be unloaded. 10-15 minutes later a rentacop flys up and parks right in front of my truck. And is yelling at me that I didn't weigh in and I can't just drive in here.

Well... to make a long story short Ret. ARMY what is the 5th general order of a sentry?

Hard to guard when you leave without notice...

If it's after the unload at the final stop, as long as you're not assigned the next load, you can use "Off Duty Driving" to head to a truck stop, bobtail or empty trailer. Unfortunately, not all companies allow this, though, and not all companies have this feature available as a tab on the ELD or AOBRD device.

Im curious as to his understanding of the safe haven rule. is this a hazmat load?

Your attention span is much longer than mine. Completely missed that. Yeah.. Safe haven only has exemptions for "certain" hazmat drivers...

If it's after the unload at the final stop, as long as you're not assigned the next load, you can use "Off Duty Driving" to head to a truck stop, bobtail or empty trailer. Unfortunately, not all companies allow this, though, and not all companies have this feature available as a tab on the ELD or AOBRD device.

I'm not so sure about that empty trailer bit... And I would be sure you check your particular companies rules to the T. My company will not allow any trailer and has to be and out and back trip. For example from a terminal , bobtail to Wal-Mart and back to terminal.

I know this... because I had and lost off duty driving privileges with another company.. 😁

They think we should be fit and polished and only work 8-5 Monday thru Friday..... I've ranted enough. Truckin'up. Thanks for reading, Mr.Ed and I'm going back quiet.

Believe me I'm far from the Left, but what's wrong with being fit and "polished"? Is it a bad thing to work out and eat healthy, brush your teeth and shower?

Speaking from someone who used to be OTR (and probably won't ever go back), I work M-F 0700-1800 and I enjoy it a lot more than the nomadic lifestyle of trucking.

I just don't see where you're going with your last paragraph. But basically, you've never had this happen to you before because you've been on paper for all these years.

Edward R.
Morton but wish I were in Tennessee, MS
Experienced Driver
Posts: 3
Joined Us:
4 years, 1 month ago

I'm sorry, I should have said this before.. I did talk to security before they unloaded me. The response was vague and to tell the truth the delay was not expected. But it happened. All I'm saying is that when it did occur they could have let me stay the 2.5 hours I needed in order to be"legal". I started my 8 about 45 minutes into the delay which is why I only need about 2.5 hours. Not a hazmat , just wanted the extra time so I could get to the tank wash tonight and get a full break in before loading in the morning. No big deal, it's going to work out. P.S. Thanks for letting me join, probably won't comment much or post anything else but your page has good info. Thanks again.

Advice For New Truck Drivers Personal Conveyance Safe Haven Trip Planning
Click on any of the buttons above to view topics with that tag, or you can view a list of all forum tags here.