is anyone REALLY that stupid?

Seriously? You’ve been in line at a truck stop (any one, you pick) fuel island before, right?

I was at the terminal talking to my trainer (I had been out of training for 2 years at this time) and catching up. Somehow we got on the subject of heavy loads and out of no where, this total stranger comes up and says that he was at Anheuser Busch in St. Louis getting live loaded. They loaded 300k into his trailer, and when he went to scale his engine and transmission blew up. It was really hard not to laugh in his face, but my trainer and I just looked at each other like "Who the hell is this guy?"

So yeah, liars counter, fuel Island, and terminal....I guess they ARE that stupid. Lol

I don’t think it possible to get half that weight of beer in a trailer using every available foot. What an idiot! That’s a whopper!

What a hilarious stream of commentary..

First of all, using cannabis in your off time does not cause a safety hazard when you are not under its direct influence. Therefore it is not logical to bar use of cannabis at all in my opinion. Secondly, all driving tests where cannabis was actively altering the driver's minds has resulted in NO change to driver safety except in some cases where people have never used it before in their lives and it caused some deviation for them.

The logic that I see in some threads is that driving while under the influence of opiates, alcohol, etc. relates to using cannabis within 30-90 days of a drug test. You cannot be 'high' for 30-90 days for using cannabis once. It is not a safety hazard for people who ever have used cannabis as it is not a safety hazard for someone who is not drinking while driving. The ignorance about cannabis usage and driving safety is much more rampant than I would have imagined for a field which is so filled with those who are safety conscious. I agree that use of Ambient, alcohol, opiates and even cannabis should be disallowed while driving for safety reasons (despite studies indicated cannabis may be safe to drive with-- I'd like to see someone prove this wrong and cite their own study? Go for it) but use of it during off hours is not dangerous at all and it is a legal medication in most or many states. I won't bother to see if we're over 26 states with legal medical and / or recreational cannabis but it is not more dangerous than alcohol to use when you are not driving.

Calling me stupid for putting this up is forcing me to challenge those to a debate about the safety issues of cannabis. I am calling you ignorant, unintelligent, aggressive, rude and impractical.

Cannabis is a cousin of hops and CBD's are contained in beers and ales. Your body produces cannabinoids and requires them. Cannabis is also a food which is ideal for human consumption. Cannabis relieves stress, pain, PTSD, can settle autistics and seizure ridden afflictions when nothing else can. Cannabis was used commonly by horse and buggy drivers before anyone had a stigmatic opinion about it which resulted from vast disinformation in the 20th century which was paid for by Standard Oil.

Thus I cannot really entertain much recognition for the merits of most responses because they are not logical, enlightened, scientifically accurate or interesting. It will not be much of a problem for me to pass a urine test soon and when the time comes I can pass a blood, hair follicle or any test. Then there will be no issue. I do not need to use cannabis but many do and in my opinion it is harmful to the trucking industry, to this country to bar it from any person with any occupation because it simply is not the government's business to stop people from using medications which are not safety issues and which work for them.

If we are in a free country, then we can use what is legal here, what is inexpensive, what works, what is natural, what is our choice-- when we are not working. Alcohol is more dangerous than cannabis-- period.

Thanks so much for your time.

No, Thank You for your warped opinions. Thankfully you have it all figured out, so why waste your precious brain cells on us (you will be losing more of those quicker with your obvious habit)?

Since it is a Free Country, if it’s noting working out for you here, why not go somewhere else that suits your needs, wants, and expectations? Can’t stay in that basement forever, you know?

Best of luck to you! I’m sure there is a village somewhere looking for somebody just like you.

DP, we are trying to discuss the legality of cannabis use and company policies against it's use. You can beat your drum all you want, but you can do serious harm by arguing that cannabis use is good or even okay for truck drivers to use. The reality is that it CANNOT be used, and nobody is endangering their health and well- being by NOT using it. I firmly believe your opinions are a dangerous influence to young and old drivers alike. I think ANYONE who advocates cannabis use should not be allowed to post it on a site where the goal is to educate young/beginner drivers. Would you be allowed to spread your message in any school? Not a chance.

Hold on. I just looked at the GPS Tracker and professor DP is from The Left Coast, Washington State. Explains a bit of the mentality for the posts.

I am wondering how trucking companies get away with discrimination for those who use prescribed medications? My qualification for Swift was just reversed since I explained to the recruiter that I used marijuana under Doctor's advice for just a few days.

How dumb do you think people are? Let me guess what really happened. You've been smoking for years including during your last driving job, you knew you had to have an explanation for it for Swift so you went to the weed doc to get a script hoping that would cover up your years of toking up. Did you go with glaucoma or back pain?

He won’t come back since he doesn’t have a leg to support his claims. I informed him of that in my first reply. 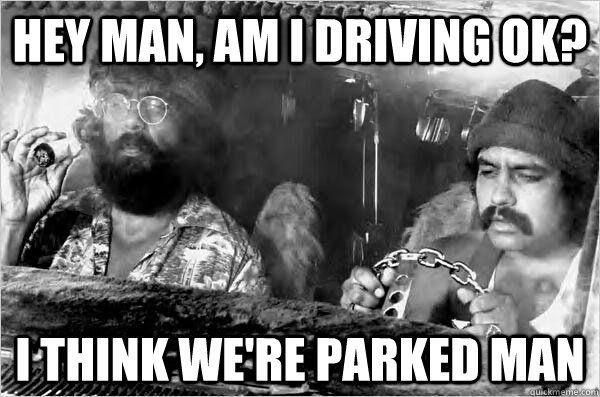 Based on his very long winded reply he came here with a agenda to try and get people to support his stance on the devil's lettuce. I have seen posts like this on the Internet for a few years now and it follows the same pattern.