Good to see you posting again!

Five weeks is too long between posts, so drop in more often for those that enjoy reading them?

HOS refers to the logbook hours of service regulations.
Anne A. (momcat)'s Comment

I'm sorry your LTR crashed.. I know for a fact that this lifestyle isn't always conducive to any/many/most LTR's~! :(

I hope you find the time, wherewithal, and adventures to share with us'n's here.

Yes, 5 weeks was too long. There was a strange mindset that occurred while quarantined: isolation from everything, including texts and online stuff.

My local gig the other day took a great deal of time. I was on time for the delivery, but waited about 2 hours for a dock assignment.

Docking required blocking 6th street south in Seattle. I’m fairly content messing up traffic and it was light, thank you lock down.

The lumper unloaded the bails into an intermodal can, I’m guessing for shipping overseas. When there was a lull in movement I went into the dock area and found him swearing about the BOL, it said 26 bails and there were actually 27, and that messed up his load on the can.

They had a big push broom, which made the clean out much easier! He repositioned the ramp so I could sweep into it. It’s the little things that make my day!

Dispatch stacked a Costco load on me after that. Another split: Wilsonville and Eugene. I decided to stop for my 10 at Toutle SB rather than push for Wilsonville and arrive while Costco was still open and struggle to park. This tactic is something that wouldn’t have occurred to me 3 months ago. Again, the learning curve!

Google maps is incredibly helpful! I always review it when I’m going to a new place. Eugene Costco was tricky to get into and required some kerb driving... to avoid the people in the turn lane.

The unload was prompt!

I deadheaded to Woodburn for a Winco load heading to Puyallup. Just before arriving at Winco I blocked the suicide lane to check google maps and take a bio break. The little things: pee before backing!

It was a drop and hook. I got some much needed supplies as well. The empty was due for its PM, so I dropped it in the shop queue and sent a Mac38 and parked for my 10.

While reviewing my posts above I missed it appears I missed a story about heavy BS before going on leave. I’ll post about that another time.

The Sumner terminal is being renovated now and has no shower. Wet wipes only go so far...

Today’s “load” is deadheading to Woodburn for a Winco load tomorrow. I’ll leave this afternoon and park at TA in Aurora for my 10, a shower, and laundry. I’m pretty stinky...

Freight has been weird. Early in the outbreak it was super heavy. Stores implemented rationing and that slowed the pace. Now, they’ve been directed to curtail non-essential product. That has definitely impacted freight. I’m grateful that I’m on a dedicated essential account, but we are all slowing.

I sprained my elbow on Tuesday and will be recovering for a while.

I’m considering switching to the Lowe’s account when I return to work.

It’s frustrating to come off quarantine to have to go out again.

My elbow is still messed up.

I cleaned out my truck so Swift could put it back to work. I spoke with my DL and he’s going to put me on the Lowe’s account when I get back.

I’m eager to get back on the road for some longer hauls. Heavy was neat, but it’s hard to get consistent high miles.

Bellingham is pretty laid back and is still on lock down.

It took some doing, but I finally got a referral for physical therapy. 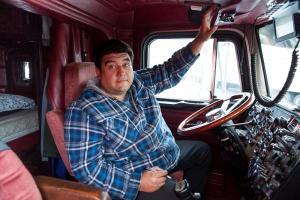 My elbow is still messed up.

I cleaned out my truck so Swift could put it back to work. I spoke with my DL and he’s going to put me on the Lowe’s account when I get back.

I’m eager to get back on the road for some longer hauls. Heavy was neat, but it’s hard to get consistent high miles.

Bellingham is pretty laid back and is still on lock down.

It took some doing, but I finally got a referral for physical therapy.

Hi Spoonerist, you talk so interestingly about your travels. But what kind of music do you like and how do you create your playlist? Is it separate for each trip or do you listen to same songs several times?

Good question! I use Spotify and add or remove music depending on my taste for the day. I then play it on shuffle. Right now it’s as mix of classical, punk, edm, metal, and bluegrass. Eclectic to say the least.

PM me for more information.

The primary person a driver communicates with at his/her company. A dispatcher can play many roles, depending on the company's structure. Dispatchers may assign freight, file requests for home time, relay messages between the driver and management, inform customer service of any delays, change appointment times, and report information to the load planners.
Spoonerist 's Comment

Life and direction have changed for me.

I’ve come to the end of the road for my trucking career. My body and mind can’t hack it. It’s been an interesting year and I’m grateful for the adventure.

I’ll be reverting my license back to a non-CDL next month and moving off grid at the end of September.

Thank you to the mods and Brett for all you do!

Sorry to hear that it didn't work out for you. I'm sure you made plenty of memories, both good and bad, that will last a lifetime. It's been fun following along on your journey. I wish you luck in your future endeavours. I would encourage you to keep the CDL active if at all possible. You may not plan on ever driving again but we frequently see people stopping by that downgraded their license and now need the redo the whole shabang. You worked your ass off to get that CDL. Don't be afraid to stop by and let us know how things are going for ya.

Good advice for keeping the CDL. Unfortunately, I won’t be able to pass the physical due 8/6.

Many years ago I was in a similar position with a class B. I tried to revert the license and the AZ dmv messed up the process and I didn’t discover the error until trying to get a CA dl and discovered my dl was suspended... 3 years of higher insurance rates for a clerical error. Good times.

I’m going to be particularly focused on this errand.

Swift Transport Advice For New Truck Drivers Changing Careers Company Sponsored CDL Training Hard Lessons Learned Home Time
Click on any of the buttons above to view topics with that tag, or you can view a list of all forum tags here.