Glad you are reading along. Thanks!

I think I know the place you spoke of, as I recall seeing some other flatbed trailers in the vicinity. My place was a ghost town Saturday afternoon and that night. Great, quiet place to park. I wrote it down in my notes for possible future use.

Been to St. Louis. Laid on my back under the middle of Arch and took a photo.

Mural is WAY cool too!

Your having a bad run of luck sir. Maybe switch sides on your bunk to break up the jinx.

Your having a bad run of luck sir. Maybe switch sides on your bunk to break up the jinx.

If they don't get their act together, I may be switching more than just the position of my bunk (which I already do).

We're still awaiting the phone call from the TA shop for a garage spot at 2330. I had parked, then dropped the trailer, before laying down to listen to the radio. At just before 0300, the shop manager calls my cell, and I creep over to door #1, then pull into the shop. The one mechanic that's on duty for the overnight shift quickly has the passenger side, front, drive axle brake canister swapped out in just over an hour. Speedy work by that young guy. All the paperwork is complete, I leave and reconnect to the trailer. After doing a pre trip inspection (new day on the calendar now), back to driving we go at about 0425.

Since my schedule is off, because of the five hour delay and a nap during it, I'm feeling fairly sleepy. I've also started to succumb to a full-blown cold in the past two days, dragging my energy down further. I cross into KY, then decide to park at the I-24 scales at the 37 yardstick. I stay there from 0640 until 1445, then start driving again. After another 90 miles, I'm in TN and getting the fatigued feeling again, so I park once more. This time, I've stopped between Nashville and Chattanooga, at an Exxon station calling itself a truck stop: "The Busy Corner Travel Center" on I-24 at exit 105. Mostly parking on a dirt and gravel area, with parking for about 25-30 trucks. I have not gone inside to see what they offer here for the weary travelers, but I may tomorrow morning. Back to the Sleeper Berth , but between my schedule being so off and this cold developing, not enjoying much sleep, yet I am feeling beat at the same time. 200 miles to reach the final delivery Tuesday morning in Norcross, GA. 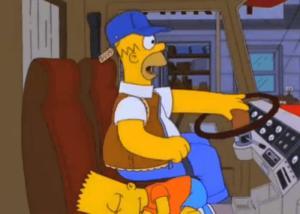 Hey PackRat just finished reading your daily driving diary. What an eye opener! I had no idea what trucking was like and I like what I'm reading! I'm getting excited about getting my CDL and hitting the road with y'all in five years! I also wish I had started reading earlier, I might have gotten to meet up with you in Wacko,TX when you were here. Stay safe on the roads and hope your cold doesn't last too long.

Thanks for that reply, Tortuga. Glad that mostly daily rambling of mine is helping somebody see how things are for an OTR driver.

Keep an eye out, and if you'd like to meet. I'll post a message/start a topic on here for the next time I'm passing through.

I got up and going the final 200 miles to the delivery at around 0300 this morning. I wanted to allow for both extra time around Atlanta for the pre-rush hour traffic, and to get the final two hours of my split sleeper at the delivery. I ended up arriving there at 0659 for the 0830 appointment, so the I-85/-285 traffic wasn't very bad at all. No marks on the truck, nobody run over, and no exchanging gunfire. Yes, Atlanta is lawless. Anything goes. My #1 Least Favorite City to drive around.

I checked in at 0800, after locating the building, which was on a different street than where I parked. Finally met with the dock boss and shown where to dock. This was the rear of a strip mall-like set of connecting buildings, so not much room. This one was worse because another semi truck was blocking the easy way into this lot. No approaching the dock on the driver's side of the cab. Backing from the street was ruled out due to a 45 degree turn in the narrow driveway. A blindside back was not possible because of other business trucks that prevented me from swinging the tractor. So, I had to do a tight U-turn, made even worse by a single car parked in my arc. A real challenge, but after 15 minutes, I was docked with no bent sheet metal. Wish I had gotten some pictures, as this was truly a "Top Ten Tightest Spots" kind of place.

I got my next plan to drive 91 miles from Norcross to Lagrange, GA to be loaded, which is scheduled for 1400. Thanks to the slow service, coupled with worse Atlanta lunchtime traffic, I got there at 1407. This was after I drove by the place once because dry vans would never go to what appeared to be a lumber yard, right? Sure enough, that's where I needed to be, getting a trailer full of new pallets. I don't know where the salespeople come up with these customers, but this one was different in a good way: something I've never done. 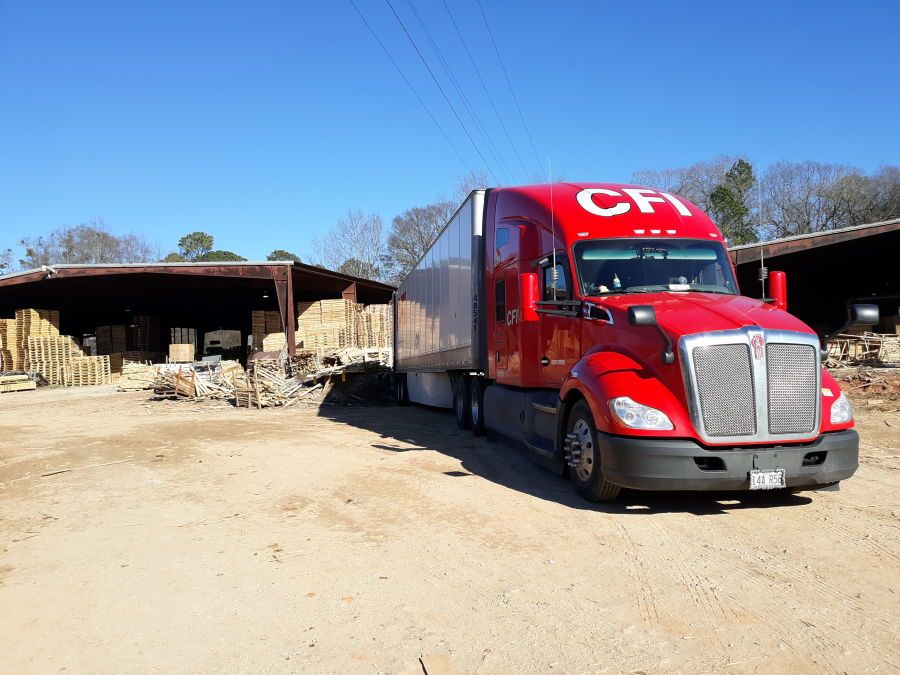 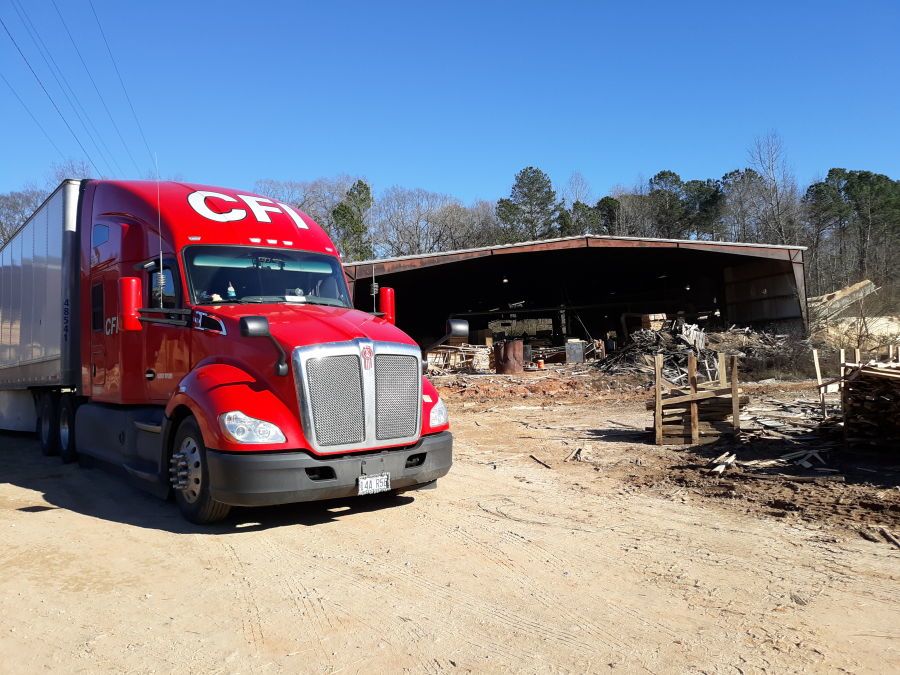 It's not always building docks, lines to guide you for backing, and generally smooth asphalt. 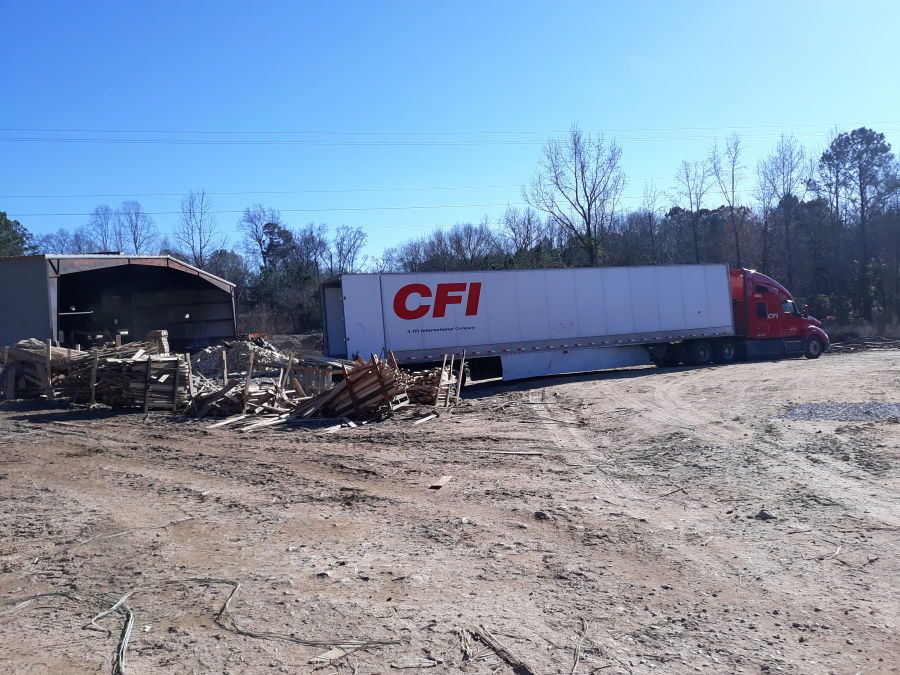 They got me loaded, and allowed me to park here overnight, too. Great place, and I've never gotten a pallet load where these are manufactured.

Today was 5.4 hours for 300 miles, with 0.4 hours On Duty, totaling 5.8 hours. I won't get this back next week because I'm going to take a rare 34-hour reset in Little Rock after the delivery tomorrow (if I have the hours that I can get there). I'm kind of tired from the weird sleeping non-schedule I've been on for the past two weeks, and I still have this cold I'd like to be rid of. It may turn into two days off to close out this month instead.

Stay tuned and keep those cards and letters coming!

PackRat we been traveling some of the same roads . You were up north when I was and now we’re about 100 miles apart. Did u enjoy your ride overMonteagle today, I love driving through there. Last week i took my ten at the brake station. I usually drive Atlanta 3 to 4 times per week. The new construction on the wall on 285 is horrible. I had to drive Nashville today, to me it worse than Atlanta. I too, spent the last of my day in the shop, but only for maintenance. Delivery here in the morning. Be safe!

(Keep an eye out, and if you'd like to meet. I'll post a message/start a topic on here for the next time I'm passing through)

Sounds good PackRat hopefully we'll be able to meet up on one of your trips here....

CFI - Contract Freighters Inc Crete Carrier Choosing A Trucking Company Hours Of Service Older truck drivers Photos Truck Driving Orientation TT Website
Click on any of the buttons above to view topics with that tag, or you can view a list of all forum tags here.