Don't worry about your trainer being a lease/operator. Just go with the flow. You're about to get into that steep learning curve we all speak about. The great thing is... you're prepared! Go get "em!

You're creating an excellent diary. I'm enjoying seeing how things are unfolding for you. Focus on your training. If the diary has to suffer, we understand. You can always catch it up a bit when you catch a break.

About time you got a trainer you slow poke, regardless, congrats man, i know you've been dying to drive!

The night before, I had logged into the Prime Mobile app, which gives me all messages for the truck. Got a message from dispatch at 6:43 to pick up an empty trailer from the Prime terminal. Got up and got all my stuff packed up. About half an hour later got a text message from my trainer to meet me out front of the Campus Inn. We met up, loaded my bag, and went to get a mattress for the top bunk. Then went to find the empty trailer, a 53’ spread axle flatbed. Meanwhile, we got more messages as to our load. I drove from the Prime Springfield terminal to Birch Tree Missouri where we picked up our load. It was in a gravel parking lot and not too tight to navigate. To load, we needed to pull along the loading dock where they loaded us from the side: See below:

The parking job looks harder than it was. Essentially, I just pulled up along the dock and got the trailer as close as I could, then backed up moving the rear of the trailer to the drivers side to line up with the dock and then pull forward. The only little tricky part was, while looking in your mirrors to line up the trailer next to the dock, you had to watch your mirrors. If you notice from the picture, the mirrors actually extend over the dock and also those rails on the steps. So, I had to swing out to the passenger side each time to go around the rails. Other than that, a pretty easy parking job. Then after they loaded four pallets, you had to pull the truck forward. Rinse, repeat.

After we loaded, I pulled to the right and then backed next to the building. The rest of the pictures are in the link below. Plenty of room to navigate so not really any difficult backing. We secured the load with three straps per bundle, edge protectors, and tarps. He has two tarps that are heavier than normal. It was work, but not onerous.

After that we headed out toward the Petro in Wilmington, IL on I-55. He always reserves a parking spot. Logged off duty, then sleeper for the night. 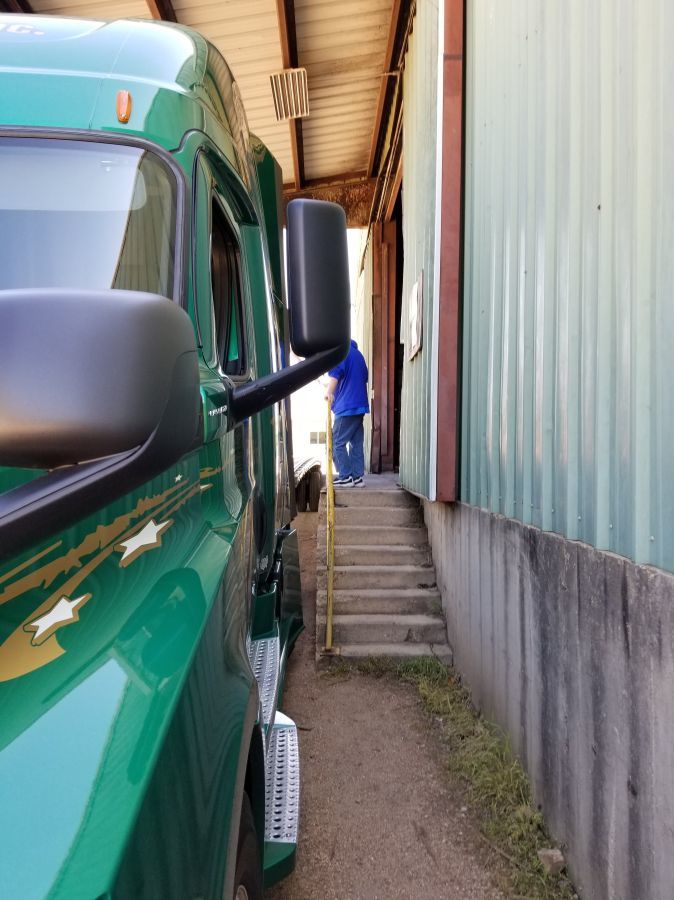 Got up early, got coffee and a breakfast croissant, and then headed out to Niles, IL which is a suburb NW of Chicago. I drove all the way to the receiver and parked. Drove in Chicago traffic, but nothing really hectic with everyone at home (supposedly). They had us park in the middle of the parking lot so they could unload from both sides. Not an enormous amount of space, but no major obstacles, so pretty easy maneuvering.

Pulled the tarps off, rolled them up, pulled off straps and edge protectors, wound up the straps, and put everything away. Had the forklift driver put the tarps on the trailer. He put them right on the boards my trainer had set up. My trainer buys Prime flatbed baseball caps in bulk and hands them out to the forklift operators. After wrapping up, we waited for our next load, which was wire hangers out of Troy, IL.

Deadheaded 275 miles to Troy, IL to the shipper. This is where parking lot navigation got interesting. A link to the aerial is below:

The lot I had to navigate is to the left of the ADR Auto Repair & Towing. It was full and there were trucks and four wheelers parking in the aisles. I did a counter clockwise loop around the lot looking for a space to drop the trailer. A work van was at one of the turns, so I had to stop before I hit it. The driver was in the work van so he moved for me. But when he moved, he backed up closer to my trailer (gee thanks). After he realized that didn’t help he moved out of the way. After the loop, a space opened up along the north of the lot where the hatched yellow lines are. If you look at the street level to the west/left, you will see a truck and flatbed trailer parked there. That’s where I dropped the trailer. You will also notice the pushed over ballards and bent posts. From the angle I came in, I had to move the trailer closer to the line/passenger side. So, cut the to the left, back a little, straighten up to avoid guy wire, cut left, straighten to avoid utility pole, etc.

After dropping the trailer, hooked up to our pre-loaded trailer, strapped it and off to the races. My trainer pulled out because we put his tarps on the catwalk and we have a very tight turn. He said if he tears his tarps turning, it’s his fault. We had to ask another flatbedder to back up his truck so we could get out. Like I said, pretty tight lot even for my trainer.

Drove to Brazil, IN to the Petro there. I tried a 90 degree alley dock, at night, in the rain. I had messed up the set up, so when I was backing, I started getting too close to the trucks parked opposite, which were actually pulled into the driver aisle somewhat The trainer finished backing it in. He said he would have let me redo the set up and try again but he didn’t feel like standing out in the rain.

Got up early, and got on the road right away. All we have to do today is drive. We’ve got about 650 miles to the Prime Pittston terminal. I’ll get as much as I can on my clock and then the trainer will take over and finish. I-70 east, through Indianapolis, north on I-71, then to I-76, then to I-80. Precipitation all day that started out as rain, then “floating rain,” then snow, then BIG snow. After we got into Pennsylvania, the snow started to accumulate pretty good. Ironically, we were just north of Punxsutawney, and could have swung by to choke that lying ******* of a rodent for predicting an early spring this year, but we were going to need all of our 14 to get to Pittston.

I continued to drive until the electronic signs wanted us to go 45 mph. However, no other trucks were going 45. Soon, we realized why they wanted trucks in right lane only and at 45 mph. Maintaining that speed was not an issue because you have the slowest common denominator: slowest driver in the lane sets the speed for everyone else. See the picture of I-80 below. Except of course, you had the super truckers passing in the left lane through the untouched know at 60 mph. Drove until my clock ran out where trainer took over.

Got into Pittson late. Logged off duty and toured the terminal. Decided to take a 34 so we would have a full 70 starting Sunday morning.

I recall a flatbedder, I think it was Turtle, recounting a story about explaining the feeling of a fresh 70 to a student.

Sitting in the cab, looking out over a desert sunrise, Turtle pushes in the trailer air supply and parking brake knobs.

Did I remember that right Turtle?

After the 34 we will get 4 hours of pad time before we finish the 280 miles to Rhode Island for the receiver. 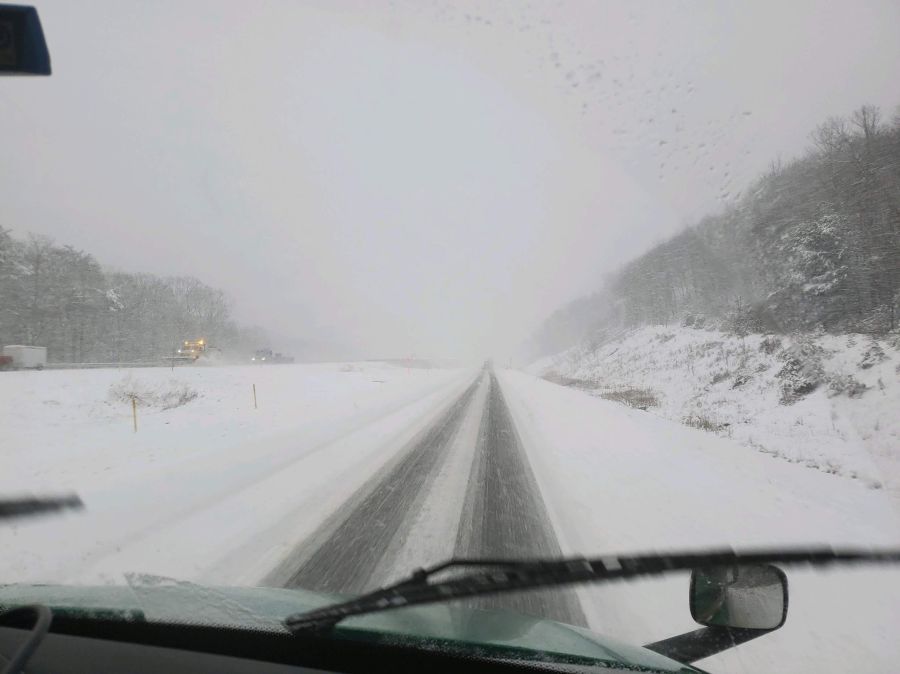 Yeah man you're off to a slammin start. I just hope you get some time to practice backing in between all those miles.

As I speak, I'm not that far from you, just down the road in Tannersville, PA. I'll soon be heading up 380 and on to 81 in Scranton for the trip up to Marcy, NY. So close..

So now that you have a little taste, what are your initial thoughts? Inquiring minds want to know.

Yeah man you're off to a slammin start. I just hope you get some time to practice backing in between all those miles.

As I speak, I'm not that far from you, just down the road in Tannersville, PA. I'll soon be heading up 380 and on to 81 in Scranton for the trip up to Marcy, NY. So close..

So now that you have a little taste, what are your initial thoughts? Inquiring minds want to know.

My thoughts are that I am enjoying it immensely. My trainer has a good attitude. Not angry or impatient.

I am facing challenges but I am learning from them. In fact I look forward to each challenge. Like the snow.

I just want to pass my test so that is behind me.

You get a mattress as a trainee?

You get a mattress as a trainee?

If I had only gotten you as a trainer, I wouldn't be so coddled.