I should have also said COVID "Cases" in my original post, and not "deaths". Mea culpa - that is on me. I scrolled back up and I was like "crap".

Still not sure how I politicized it though. There is an overwhelming connection between countries with low mask compliance having the worst rates of infections, and the countries with the highest mask usage having the lowest rates.

But going back, and playing with the columns... I'm not sure which column someone can click on that makes it seem like companies should be boycotted for protecting their employees (by asking customers to wear masks?). Again, TX & FL have more cases than the entire globe, minus those 5 top countries I mentioned. Its not New York anymore, its hitting people like us.

We can argue semantics all we want, sure, move things around if you want, switch some columns, church it up, but I can't find a single view where it appears that the USA isn't one of, if not THE, worst countries on the planet in regards to handling COVID19.

This is America. We should be the best. We should be leading from the front. Not making excuses. But right now, it feels like America is playing the part of the "I know better than my trainer" trucker who ignores reality and the advice of the successful trucker who is trying to help them. You know how that story goes. The driver fails, makes excuses, and then blames industry for their failures. The exact type of thing we try to help drivers avoid. I learned this from you!

Clearly the "do whatever you want regarding masks" didn't work out very well for America when you compare it to any of the countries with mandated mask wearing. I don't like anyone telling me what to do either, (besides my wife - love you honey!) but there is a reason the government doesn't let everyone have pet lions in their apartments... and I don't think its a vast political conspiracy. (I'd love to be wrong about that though, I bet it would make an amazing story!)

The article quotes drivers saying they will boycott Pilot because Pilot is protecting their employees from a virus that is tearing through the country right now. There are 100 reasons to dislike Pilot, but reducing the risk of infection to their employees seems like an emotional overreaction.

WorldOMeters.info sorted for deaths per 1 million population again shows the United States below the top 10.

Correct! With all of our money, resources and access to modern hospitals, Americans don't finish in the Top 10 when it comes to deaths per million.

We are in the bottom 5%. This is America, and this is embarrassing.

I just don't know how any of us can even make sense of the statistics. I have had two friends with stage 4 cancers die recently. Both of them were counted as Covid deaths. How can that kind of tomfoolery give us any clear insight into what's actually going on?

We can't even discuss this virus without it being political. Our country's political players have embedded the whole thing with their influence. 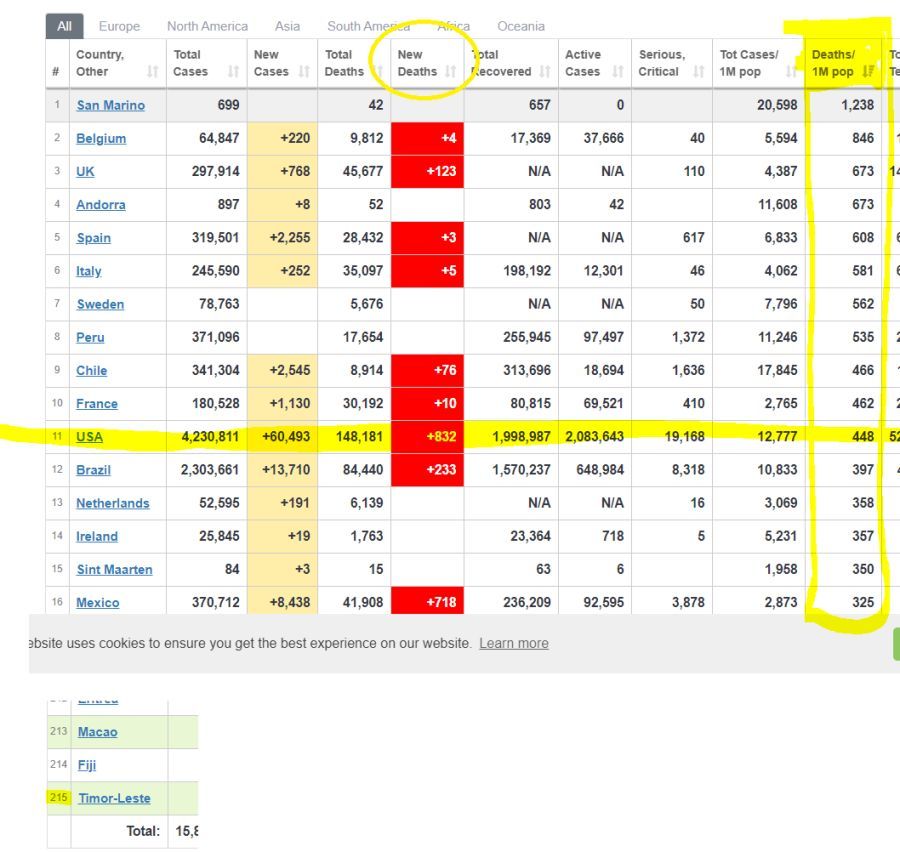 I'd also like to point out the circled column... Places that got hit relatively hard found a way to stop the spread almost immediately...as if by magic. Is it crazy to say we should look at how those countries handled it? We have the largest economy in the world, we should be able to do anything another country can do. This is America. What can't our nation do? What enemy can we not defeat? What job can't we do? Let's forgive our knee jerk reactions from when this started, throw out what we said about the virus back in February, and work together so our kids still have grandparents to spoil them next year. We've already lost more Americans to COVID than we did to World War I. But the only enemy we seem to be fighting against is ourselves.

Jrod, that column you sorted by the last time is "New Deaths" which is the # of deaths a country reported for that day only.

I don't think it's a vast political conspiracy. (I'd love to be wrong about that though, I bet it would make an amazing story!)

Oh you're definitely wrong about that. It's an amazing story the same way Hitler's was an amazing story. It's the story of sociopaths who fought their way to the top of the food chain and manipulated the world for their personal gains. The same story as humanity has lived for thousands of years, only the actors and the methods change.

Certain topics are so intertwined with politics the mere mention of them becomes political.

The mere mention in casual conversation that I drive a full size pickup truck is political.

I just don't know how any of us can even make sense of the statistics. I have had two friends with stage 4 cancers die recently. Both of them were counted as Covid deaths. How can that kind of tomfoolery give us any clear insight into what's actually going on?

We can't even discuss this virus without it being political. Our country's political players have embedded the whole thing with their influence.

Did they have COVID? If someone is already weakened by stage 4 cancer, COVID is going to steal some of those precious weeks and months of life.

Not to make light of the situation at all, but here is how someone smarter than me explained it to me:

Certain topics are so intertwined with politics the mere mention of them becomes political.

The mere mention in casual conversation that I drive a full size pickup truck is political.

I’m really not trying to offend anyone but, I’d like to make a heartfelt plea that we stick with trucking truth and try to stay away from COVID opinions. I get it, there are strong feelings on both sides of the topic. Every time the topic is mentioned the conversation turns into a big echo chamber of noise back and forth and usually results in a whole bunch of finger pointing about who does and doesn’t get it.

You folks are experts on the trucking industry and I come here to get an edge on my career, and I value that advice. I also think my doctor is very good at what he does, but I wouldn’t think about asking him for advice on my trucking career. Just like I wouldn’t ask my mechanic for political advice.

If you read JRod’s original post it was a simple plea to wear a damn mask. There was absolutely nothing political about his original post though many read it as political because somehow dealing with a global pandemic has become a hot button political issue for both sides of the spectrum.

There are many things that are assaults on our personal liberties that people just take for granted. I personally think seatbelt laws are an assault on my personal liberties, but it’s the law and my company requires it. I think pants are uncomfortable and legally, I can walk around in my tighty whiteys without violating any public indecency laws, but most places have a no shirt no shoes no service policy and it’s just common decency to wear clothes. So, guess what, I buckle up my seatbelt, put on clothes and wear the damn mask because that’s what the companies I frequent ask me to do, even though I don’t want to do any of those things. Call me sheep if you want, but to get along in society (or a career) sometimes you need to do things you do t want to do.

I don’t recall ever seeing someone get into an argument at a store or restaurant about shoes or shirts being an attack on their liberties. Or arguing with a cop over seat belt use. Maybe I’m just not shopping at the right places.

Alright I started with a plea for restraint, and then couldn’t restrain myself. See how hard it is. Again, I’d like to see if we can call a moratorium on COVID responses going forward right after open season for anyone who wants to beat me up for my rant.

All imma gunna say is.....classifying a death as due to covid. when their prior health issues were the main cause always comes back to MONEY!!!

They get paid a big chunk of cash from the Feds soon as they say covid did it ......I got more to worry bout than this propaganda brainwashing going on......

Coronavirus The Economy And Politics Trucking News
Click on any of the buttons above to view topics with that tag, or you can view a list of all forum tags here.